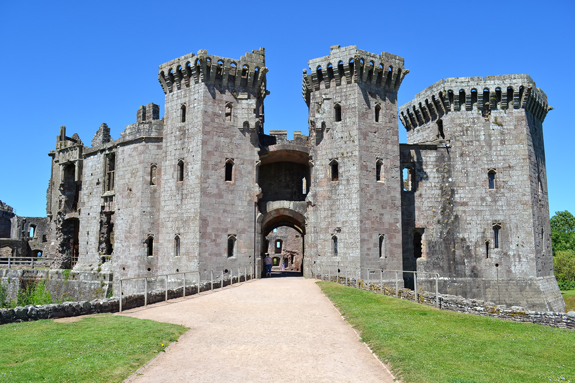 For anyone interested in medieval times, knights in shining armor, fair maidens, the struggles of kings and conquered peoples, and fortifications, the place to visit is Wales. This tiny country in the United Kingdom has the world’s best collection of existing castles from the Middle Ages.

Between the Norman invasion in 1066 and the English Civil War in 1651, warring English and Welsh forces constructed, and in many cases tried to destroy, more than 400 great stone fortresses. That’s a huge amount for such a small place. Some castles were constructed by Welsh princes to defend their homeland from the English invaders. Other castles were built by the English kings William of Normandy and Edward I to subjugate the proud nation of Wales.

Here’s my list of the top five castles to visit in Wales: Conwy, Beaumaris, Caernarfon, Harlech, and Raglan.

I started my castle tour driving into Wales from the Roman town of Chester, England. The first stop was the magnificent Conwy Castle. Conwy has been described as “one of the most outstanding achievements of medieval military architecture.”  Conwy Castle was built from 1283-1289 to strategically protect the entrance to the River Conwy in north Wales. The English king Edward I withstood a siege in the castle in 1295 during a Welsh revolt. After climbing to the top of one of the towers, I could see for miles up and down the river. It was certainly built in the right spot to control the area.

Farther west along the coast of North Wales is Beaumaris Castle. This is the last of the many castles built by Edward I. Construction began in 1295 with 3,500 laborers on the job. After 35 years of building, the money and supplies ran out and the castle was never completed.

Beaumaris was designed with geometric symmetry in a beautiful setting amidst marshland. Part of the castle was connected by a short protected channel to the Irish Sea, so ships could safely deliver men and supplies.

The most famous castle in Wales is Caernarfon Castle. This fortress was modeled on the walls of Constantinople (modern day Istanbul) and begun in 1283.

Caernarfon was intended as the seat of English government in Wales. In 1284, Edward I’s son was born in the castle and thus was dubbed the “Prince of Wales.” This tradition of giving the heir to the English throne the title of Prince of Wales carried forward all the way to 1969, when Prince Charles became the latest prince in a ceremony held at the castle.

Situated on the west coast of Wales, Harlech Castle has a concentric design and is noted for its large gatehouse protecting the entrance to the castle. It was also built by Edward I from 1282-1289 during his invasion of Wales.

Harlech was controlled by various sides in the English and Welsh wars and later in the English Civil War in 1461-1468, and was the site of several sieges. The castle was heavily damaged during the sieges and was never rebuilt.

The last castle I visited before leaving Wales was Raglan Castle. It is one of the oldest castles in Wales, having been established by the Normans in the twelfth century. It was modified throughout the late medieval period.

Raglan was lived in for hundreds of years before being ruined during a siege in the English Civil War.

It was interesting to see the parts of the castle used for domestic purposes, such as the kitchen with its massive fireplaces and ovens, and even a latrine with a stone toilet seat!

As we know very well today, war is expensive. When the English invaded Wales, I wonder if King Edward I had any idea how much it was going to cost his treasury to build all of these castles to protect his conquests.

Was it worth it? Probably not, but it left us with a rich array of stunning military architecture to appreciate.