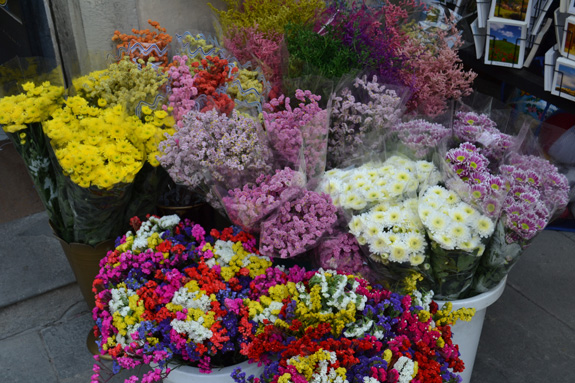 “Buongiorno!” said the passport control officer with a smile.  “Welcome to Italia!”

We passed through to the baggage claim area to meet the rest of our party. Everyone was accounted for, but we were missing two suitcases.  We were to drive three hours from Rome north to a small village in Umbria, and I didn’t want to have to make the return journey to Leonardo Da Vinci Airport to pick up the suitcases.  I would do it if I had to, but maybe the airline would send them to us later in the day.

“Go to the baggage claim desk and fill out a delayed baggage report.  With luck we’ll have the bags later today when another flight comes in,” I sagely advised.

Unfortunately, the suitcases were owned by two members of our party, a middle aged mother and her twenty-something daughter.  They had never been outside of the US before, and had rarely flown.  They were apprehensive about making the trip at all, but it was a small destination wedding of a close family member so in the end they committed to the trip.  They had to run to make a connection in the US for the flight to Rome, and their bags didn’t make it.  All they had with them were their handbags and the clothes on their back.  The start of this trip was not going well for them.

They dutifully traipsed over to the lost baggage desk where the clerks speak some form of English, Esperanto, or pig Latin.

“Si, Senora, we send bag to you tomorrow, when next flight comes,” said the harried clerk.

It was a Monday.  The wedding was on Saturday.  No problem.  The suitcases will be delivered on Tuesday.  Another twenty-four hours in the same clothes isn’t preferable, but when traveling one must be flexible.

The drive to Umbria was beautiful, except for the three wrong turns and getting lost in the ancient streets of Perugia.  Traffic signage is definitely confusing in Italy.  At least to me.  (For more of my Italian driving misadventures, read CDW, what’s that?) We eventually made it to our bed and breakfast hotel.  The B&B was a renovated monastery complete with a small chapel.  The owners, a British couple in their 70s, had spent the last 20 years furnishing it as a fancy Italian country villa.

The next day I figured that the bags would arrive by mid-afternoon.  I reassured the two women that by dinner time they could change into fresh clothes.  However,  the afternoon passed by with no delivery.  They were becoming a little distraught, especially the daughter.

I asked Julia, the B&B desk clerk, to call the airline in Rome and find out what had happened.

“I am told that they will be delivered on Wednesday,” said Julia.

I asked the women if they wanted to go shop for some new clothes.  We went to a town and shopped, but they bought nothing.  Apparently they didn’t like the styles.  They didn’t want to buy something they would never wear again once their bags arrived the next day.

On Wednesday, no bags arrived. This was getting annoying, and I wasn’t the one in the same clothes I put on Sunday morning.  The weather was hot and humid every day.

I called the airline in the US.  After 45 minutes of multiple phone prompts, call disconnections, and being putting on hold twice, I finally got to talk to a live human being.  The polite customer service representative told me that according to the all-knowing computer, the bags were indeed in Rome, had arrived on Tuesday’s flight, and that I would have to check with the lost baggage desk in Rome to find out any more information.

I asked Julia to call Rome again and complain loudly while waving her hands like a true Italian, even though she was Russian and that probably doesn’t work over the phone. She found out that the suitcases had been handed off to a courier service to be driven to Umbria and that they would arrive on Thursday.

The mother put on a fake smile and tried to muddle through this turn of events.  The daughter was upset.  After more shopping excursions, they still bought no new clothes.  Even I was tired of seeing them in the same clothes.

On Thursday morning, a white van pulled up in the driveway.  We all cheered!  The arrival of the missing suitcases was heralded like World Series champions.  However, the driver got out carrying one suitcase, set it down, and drove away.  It was the mother’s suitcase.

The daughter burst into tears.  The wedding was now 48 hours away and she had no dress to wear.  She went to her room to be alone.

Just then another white van pulled into the driveway.  Hallelujah!  The arrival of the daughter’s suitcase!  Why did the courier send the two suitcases in two separate vans all the way from Rome?  They were reported on the same lost baggage form.  Was it a good example of Italian efficiency?

But the driver of the second van did not carry any luggage.  He delivered flowers.  The daughter’s new boyfriend back in the US, missing the new love of his life so terribly that he desired to win her heart forever, had ordered a bouquet of flowers as a nice surprise.

I went to tell her of the delivery and cheer her up.  I heard muffled weeping as I approached her door.  I knocked softly.

“I have some good news and some bad news.  Which do you want to hear first?”

“OK, then.  The bad news is that another van pulled up after you left and it didn’t have your suitcase.  The good news is that someone sent you flowers.”

When the daughter went down to the living room, a beautiful bouquet of flowers was displayed in an exquisite painted ceramic vase on a table by the window.  I don’t know anything about ceramics, but the vase looked very old and very expensive.  Julia had arranged the flowers perfectly.

The flowers changed her attitude in a heartbeat.  She was beaming, despite being in the same clothes now for five days.

Late Thursday night we were driving back from dinner when my mobile phone rang.  It was someone from the courier service.

“We have found your missing suitcase!” said a spunky young Italian woman on the phone.

“Great!” I said.  “When will it be delivered?  Can we get it Friday morning?”

“When are you leaving Italy?” she said in response, ignoring my question.

“On Sunday we are leaving the place we are staying to go back to Rome.”

“Not on Sunday, we deliver on Monday,” she said.

“No, that’s no good.” I said.  “We won’t be here anymore to receive the suitcase, the owner of the suitcase flies back to the US on Monday, and on Saturday we have a wedding. We must have that suitcase tomorrow! Her dress is in it!”

“OK. I talk to my supervisor to send it urgent tomorrow.”

Friday came and went.  No deliveries of any kind.  The daughter finally bought a dress and shoes in Siena to wear to the wedding.

We had a wonderful wedding ceremony on Saturday.  Everything proceeded as planned.  The daughter wasn’t thrilled to be wearing the new dress instead of the lost one, but at least it was clean.  We heard nothing from the courier service.

On Sunday we were packing up the cars to drive back to Rome.  There would be no deliveries on Sunday, because everything is closed.  I noticed the daughter putting a vase into the backseat of the car.

“I didn’t know you bought a vase, did you get that in Siena or Cortona?” I asked.

“It came with the flowers.  It’s from my boyfriend,” she said.

“Wow, that’s nice.”  My mind was on fourteen different things since I was trying to get nine people loaded and ready to go.  I didn’t give it another thought.

The ride back to Rome was uneventful, except for the wrong turn when the Autostrada suddenly ended in a corn field.  At the airport, the lost baggage desk had no further information about the missing suitcase.  They wouldn’t give us the telephone number of the courier service.

The mother and daughter left for their flight to the US, the daughter clutching the vase as they went through the security gates.  We were staying a few more days in Rome.

I heard later that the mother and daughter were detained and interrogated by US customs officials in Chicago.  The officials wanted to know more about the vase, such as where it was purchased and how much it cost.  Something about import duties I would think.  Or maybe it was smuggling of antiquities.  I’m sure they missed their flight to Seattle.  I don’t think they will travel overseas again anytime soon.

I never heard what happened to the daughter’s suitcase.  Maybe it is in a gigantic pile of luggage in a warehouse somewhere in an industrial area outside Rome with all of the other missing suitcases, Elvis, and the alien’s body from Area 51.

And if I get an inquiry from a certain bed and breakfast hotel in Umbria about a stolen antique vase, I know what to tell them.

p.s. I have since learned that the owner of the missing suitcase never put a name and address tag on the bag.  That might explain a lot 🙂