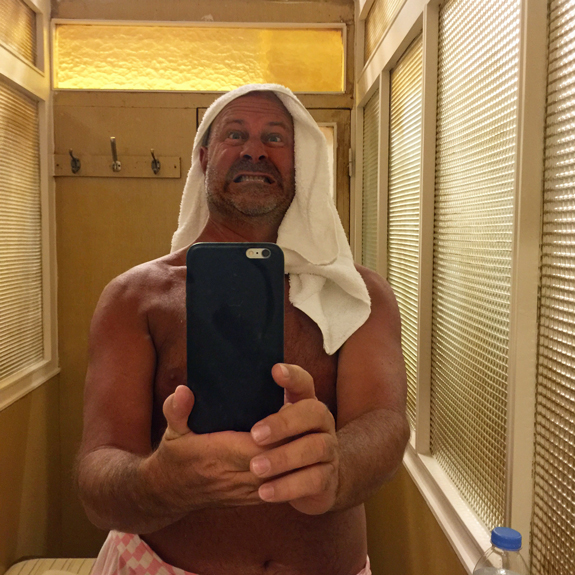 I saw the sign for the Turkish bath from a block away. It pointed down a dark alley. It looked kind of sketchy, but when in Istanbul, do as the Turks do, I thought.

The Tarihi Galatasaray Hamami bath started in 1481. It is the oldest Turkish bath in Istanbul. Not knowing what to expect, and ready for anything (well excluding getting naked of course), I pushed my way through the door. I was met by the manager of the establishment, a friendly gentleman who explained that I could leave my valuables in the locked changing room after I disrobed. I took off my clothes, wrapped a thin towel around my waist, and shuffled into the common area on wooden clogs that were too small for my feet.

“Please, go with Omar,” said the manager as he gestured to a man walking towards me.

Omar Sharif was a pudgy middle-aged man with large hands. He was wearing a towel and clogs like me. He looked eerily like Khalid Sheikh Mohammed, the notorious Al-Quaeda mastermind jailed in Guantanamo Bay.

“Come, come,” he said to me in his limited, broken English.

He led me into a large circular room with a domed ceiling. In the middle of the room was a giant marble slab.  The room was hot and humid, not quite as hot as a sauna, but close.

“Lie down,” said Omar as he gave me another towel and a pillow for my head. He then disappeared through a door.

I laid down on the hard marble, but soon relaxed as the heat seeped into my bones. My pores opened up and I started to sweat.  The grime that had accumulated on my skin as I had walked around the dirty city of Istanbul all day started to loosen in the sweat. I got drowsy from the heat and almost nodded off.

I was relaxed, but I was ready in case anyone attacked me.  OK, I was just dreaming about that scene in the movie called Eastern Promises where Viggo Mortenson fights some other Russian mobsters.

After a while Omar came back. While I laid down on the marble with just the scrunched up towel covering my groin, he starting rubbing me all over with a rough sponge mitt. He rubbed my skin very hard, scraping over and over. Removing dead skin I guess. Either that or this was some form of torture in the old Ottoman Empire.

Next, he started massaging the muscles in my arms and legs.  Hey, I thought, this feels kind of good. I normally don’t like people touching me and never get a massage. He had very strong hands and kneaded my muscles over and over. This was fine, until he starting digging his thumb deep into a muscle and pulling down the length of the muscle. He attacked my calves, my hamstrings, and my quadriceps. I grunted with pain. It was all I could do to not cry out like a little girl and start wailing. But, I couldn’t let him see me act like anything but a tough guy. I was in a Turkish bath, for crying out loud.

Wait, I was in a Turkish bath and I did actually want to cry out loud!

All during this torture session Omar sang songs and chanted to himself in Turkish or something. He must really enjoy his job. He gets to torture people with his strong thumbs.

Finally the “massage” was over. He took me over to the corner of the room and made me sit on a marble step. He then grabbed a big sponge mitt and soaped me all over. Next, he grabbed the top of my head to hold me still while he dumped buckets of cold water over me. More painful massage followed, including some half-nelson arm twists. Please don’t accidentally break my neck, Omar!

More soap, more cold water. The wash and rinse cycle was repeated several times. This was followed by more hard scrubbing. Omar kept singing to himself, stopping every once in a while to see if I was ok. Once in a while he would stop working me over and dump cold water over his own head. I guess he was working up a sweat and needed to cool off.

By the end I was certainly clean and went into the next room to take a cold shower for a cool down. I felt good overall, except for the bruises in my thighs from his massive thumbs.