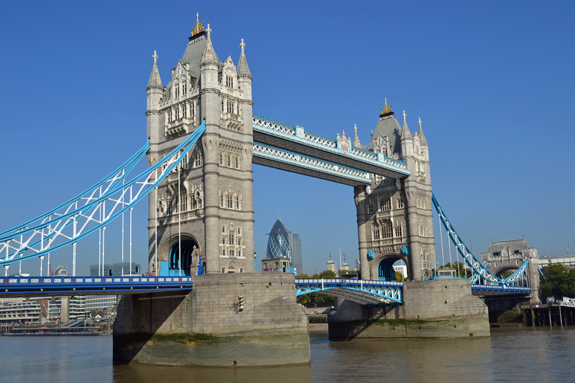 I rode the tightrope on the side of the road. I didn’t want to leave the yellow line next to the curb. The traffic was heavy even though it was a Sunday afternoon. Cars whizzed past my right side, inches from my elbow. I pedaled faster as my heart raced.

Shoot, there’s a bus directly in front of me! How could I have not seen that big red double-decker? The brake lights of the bus lit up and the bus stopped. I braked hard and skidded to a stop while I inhaled the suffocating exhaust bellowing from the massive tailpipe of the bus.

I quickly glanced behind me. Another giant double-decker was bearing down on me. I was going to become a bus sandwich! The brakes of the second bus squealed and the behemoth slowed to a crawl behind me. It then occurred to my carbon monoxide-addled brain that I was in a bus stop.

Maybe renting a bike in London wasn’t such a good idea.

London was in the midst of an early fall record heat wave. It was gloriously sunny and the high was in the mid-80s. Londoners sprawled over every available square inch of grass in the city, trying to soak up enough rays to tide them over through the bleak coming winter. England hadn’t had a real summer. The weather had been dark and rainy for weeks. Summer was officially over, but finally a brief period of sunshine broke out. This happened to coincide with my visit. I had expected cool and rainy weather. I had a raincoat and was prepared to use it. I could even buy an umbrella if there were going to be downpours. Instead I pulled the shorts back out of my suitcase.

On this day I decided to stay on this side of the Thames and seek out the Imperial War Museum. I had always wanted to see the museum, but its location is far from anything else worth seeing in London. Getting there hadn’t ever worked into my plans on previous trips. This time I was determined to explore every exhibit in the First and Second World War rooms. I was by myself and could take as much time as I wanted. I set off for the London Bridge Tube station.

The Underground is a marvelous thing in London. Taxis are very expensive and walking can only get you so far. The bus system is good and everyone should ride a double-decker bus at least once (get a seat in the front row on the top!). But the Tube is a cultural icon as well as an efficient transportation mechanism. For years after an earlier visit to London with my children we would spontaneously chirp “Mind the Gap!”

Once in the Tube station I learned that one of the lines was closed for maintenance. I was taking a different line, but so were thousands of people who would have been on the closed line. Down on the subway platform I approached a large crowd. I took my place in the crowd and waited for the next train.

The train arrived with a giant whooossh of air. It was completely packed. The people were like the proverbial sardines in a tin can. The doors opened but no one got off. After a few moments the doors closed, the train sped away, and the crowd collectively sighed.

The Tube station was full of hot, stale air. Sweat ran down my face and down my back. I remembered that I had forgotten my water bottle. This was not what I expected London to be like. It was steamy like Hong Kong or Singapore, not typical London.

Another train arrived 10 minutes later. It was packed too. It was a weekend afternoon and every train was packed to the gills. Was I really in Tokyo? Eventually enough trains came by, enough people got off, and my spot in the crowd moved forward until I was destined to get on the next train. As I waited my turn I kept wondering how London was going to host the 2012 Olympics. I vowed to not be in the same hemisphere during the event. Transportation is sure to be a nightmare.

The next train came to a stop. I could see a slight crease in the crowd of passengers on the train. I politely maneuvered my way into a spot just inside the door. I was trying to give the mother with the baby in the stroller a modicum of space. There were about two dozen people crammed into a six feet by ten feet space. Personal bubbles were compressed almost into nonexistence. It was a pickpocket’s dream scene.

Just as the doors were closing, several young men with immaculate hair pushed their way into the huddle. They were dressed in bright colored polo shirts and tank tops. I got pushed so I was leaning sideways over the stroller, by shoulder to the wall, my head near the door. The side of the head of one of these guys was two inches from my nose. He started talking loudly and flamboyantly.

“I hope you boys wore your deodorant today,” he said to the others.

At the first stop I mumbled “excuse me” and pushed my way out. I made it to the Imperial War Museum and had a nice tour of the exhibits. After visiting the museum I rested in a nearby park and planned my next move.

For the trip back home I had a dilemma. I wasn’t willing to tackle the Tube again. I could take a taxi, but there didn’t appear to be any in this part of town. I could take a bus, but I had no idea where the bus stop was or what route the buses would run. I might end up in Dover. I did have a map, and it was a splendid day, so I decided to walk. I figured it was about two miles back to the Tower Bridge.

A couple of blocks away from the museum I saw a strange kiosk. It looked like an old American phone booth that had been squashed between trucks. Alongside the kiosk was a row of heavy grey bicycles.

I had seen these kiosks before around the city but hadn’t paid any attention to them. They are Barclay’s Cycle for Hire kiosks. London had recently installed hundreds of these kiosks, which are full of thousands of bikes. Pick up a bike at one location, ride to where you need to go, and drop it off at the closest kiosk. This is the way to overcome the congested roads, expensive taxis, crowded Tube trains, and uncertain bus rides of central London. What a great idea!

I followed the directions on the kiosk and swiped my credit card. Nothing happened. The menus on the kiosk screen kept taking me in circles. I used to be a computer programmer and have used many different user interfaces and menus. I consider myself to be an advanced user of modern high technology. The simple act of renting a bicycle using a computer had me baffled.

I tried again and again, forgetting about the common definition of insanity. I began to get frustrated. What kind of idiot designed this system? It doesn’t even work. No wonder I have seen lots of bike rental kiosks but not very many bikers riding these heavy clunkers on the city streets.

Finally the machine gave me a code to release a bike for my use. It told me my credit card would be charged 1£ for the rental (about $1.55). I adjusted the seat and took off. I rode down quiet side streets and zig-zagged my way back towards the Thames. I covered many blocks without much effort. Riding was so much better and more fun than walking I thought as I cruised along.

As I got closer to London Bridge the traffic started to thicken. I moved off the side streets and rode down Borough High Street, a main thoroughfare in Southwark. I hugged the left curb and moved with the traffic. I knew I had to cross the street at the next intersection to take a right turn. My mind got confused as I dealt with the heavy traffic, pedestrians, other bikers, and motorcycles. Horns were honking and lights were changing. I kept looking to the left and back over my left shoulder when I should have been looking right and back over my right shoulder.

I made it across the road and into a warren of streets past the London Dungeon and the Tower Bridge to Butler’s Wharf. Whew… That was hectic. I had been afraid of being hit by a car every second of the last ten minutes. There was safety in the back streets. Where can I drop off the bike?

After circling a few blocks I found a nearby kiosk and pushed my bike into an empty slot in the rack. What now? How do they know I returned the bike at this location? Or at all? I reasoned there must be some sensor or ID tag on the bike that I couldn’t see.

A man was kicking the kiosk. “Bloody stupid thing” he muttered. He pulled out his cell phone and called the number on the kiosk. He complained to the customer service representative that he had gotten no indication that he had returned his bike. He started arguing with his phone as he walked away.

I didn’t know what to do. I didn’t have a cell phone. The kiosk sign said a fee of 150£ would be charged if the bike was not returned. After monkeying around with the kiosk interface for a few minutes, I gave up and went back to my flat. I would just have to deal with it later.

When I got home my next credit card statement had a charge on it from Barclay’s Cycle for Hire. After the currency exchange, the charge was about $6. I don’t know why it was that amount. I rode their bike for about 30 minutes over two miles. However, it was better than 150£ and better than walking.