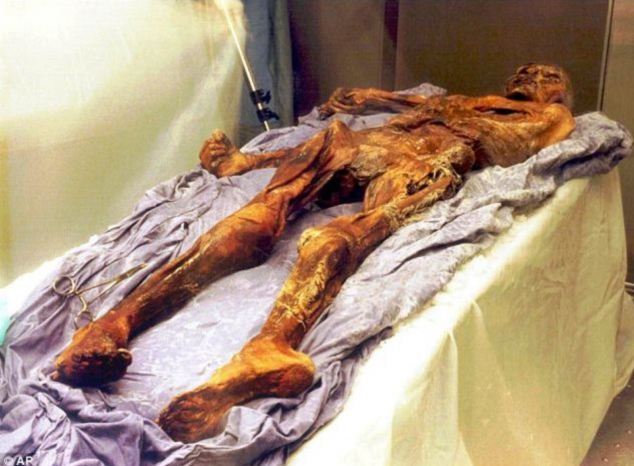 I was going to be driving from Nice, France to Munich, Germany.  I thought I could go on a route via the Tyrolean Alps in Austria that cut right through the mountain town of Bolzano, Italy.  Bolzano is the site of the South Tyrol Museum of Archeology.  This museum holds the remains of Ӧtzi the Prehistoric Iceman.  I was dying to see him.   I think he was dying to see me, except for the fact that he was already dead.  And frozen.

On the day before my visit to Bolzano, Ӧtzi was in the news again. The latest scientific analysis of his body has finally indicated his cause of death.  Murder!

Ӧtzi was a Neolithic man frozen in a glacier thousands of years ago.  He was found in 1991 by two tourists trekking through the Oetz Valley on the boarder of Austria and Italy.  His body was revealed after the glacier receded.  Analysis of the body showed that he was 46 years old when he died, was about 5 feet, 2 inches tall.  Since his body was frozen in time, scientists have been able to determine many things about who he was, how lived, what he ate for his last meal, and how he died using the latest in genetic and other testing.

Ӧtzi had brown eyes, relatives in Sardinia, Italy, was lactose intolerant, arthritic, and had Lyme’s disease.  He was also predisposed to heart disease, and infested with whipworm, an intestinal parasite.  The contents of his stomach revealed his last meal was venison and ibex meat.  He had a diet of bread and cereal porridge, which when combined with his lack of dental hygiene (including cavities), resulted in his having very bad breath and periodontal disease.

Ӧtzi was found with a bow and arrows, and a copper ax.  His clothes included a cloak made of woven grass, a coat and leggings made from goat skins, and a bear skin cap with a leather chin strap.

A hole in his collarbone suggested he had been hit by an arrow.  The most recent news announced he had been likely killed by a blow to the head.  Perhaps he had been in a fight with a mountain man from another tribe and was shot and then clubbed to death.

His mummy is now kept in a special climate controlled room at the museum.  Visitors can see him by looking through portholes.

I was interested to see Ӧtzi and learn more about the investigation.  I got to Bolzano on a Monday afternoon.  I checked into my hotel and asked the clerk how late the museum was open.  To my dismay, I learned that the museum was closed on Mondays.  My schedule wouldn’t permit me lingering in the town the next day.  I was disappointed, but explored the town nonetheless.

Apart from the museum, Bolzano is a beautiful mountain town in the Tyrolean Alps.  It has wonderful views of the surrounding mountains, and a pedestrian shopping street in the middle of town perfect for strolling on a summer night.  It was definitely worth stopping in for the night. If you go, and want to see Ӧtzi, don’t go on a Monday.