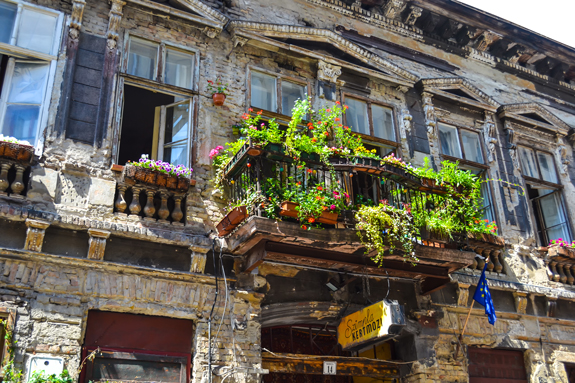 I’m not normally a bar-goer, but while in Budapest I heard about a particular kind of place called a “ruin bar” or “ruin pub.” A ruin bar is a quirky kind of bar set up in an abandoned or ruined building.  In Budapest, many wrecked buildings have been turned into ruin bars.

The first and most famous of Budapest’s ruin bars is Szimpla Kert. The owners of Szimpla converted an old factory in the historic Jewish neighborhood into the hippest new nightspot in Budapest in 2002. Instead of fixing up the place, they decided to install all kinds of strange objects into the space. They allowed customers to write graffiti all over the walls. They set up several different kinds of bars in various places within the building.  Each bar serves a kind of drink, such as beer, wine, cocktails, shots, and so on. They also created a space for live music and an open-air cinema.

The response was overwhelming. Soon tourists were coming from all over the world to drink and party in the Szimpla ruin bar. Many languages can be heard as young people (and a few old timers) mingle, drink, and listen to music.

On the night I was there, the place was packed, mostly with young Brits. I sampled a few of the drinks and listened to the band for the night, an indie world music ensemble.  The lively vibe of the place was electric, but also a little touristy. Perhaps the original local hipsters have moved on to newer, trendier spots.

During the Communist era, the authorities in Budapest erected statues to the heroes of Socialism. This art, called Socialist realism, is a style of realistic art that was developed in the Soviet Union and became a dominant style in various other socialist countries. Socialist realism is characterized by the glorified depiction of Communist values, such as the emancipation of the proletariat, in a realistic manner. The statues typically depicted the leaders such as Lenin, Stalin and the Hungarian dictator Kadar, factory workers, and farmers.

After the Hungarian Revolution in 1989, the new government got rid of almost all of the statues.  Nobody wanted to see Lenin or Stalin watching over them anymore. Many statues were destroyed, but a few were saved in a place now called Memento Park. I don’t think the purpose of the place is to glorify this artwork with a nostalgia for the past, but to be a historical reminder of the tyranny that existed in Hungary from 1945-1989.

It was kind of bizarre to walk around this park today. I think the statues are symbols of the overbearing propaganda spewed at the people of Hungary (and the other Communist countries) for decades. I’m glad to see them gone from the center city, but they make for an interesting short detour on the way out of town.