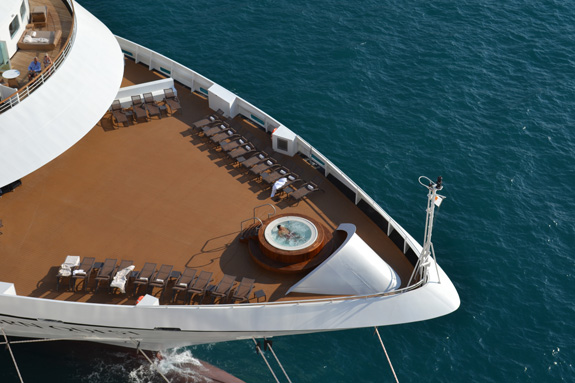 I have long resisted the idea of taking a vacation on a cruise ship.  I like to be an independent traveler, going where I want to go when I want to go.  No organized tours for me.  Being cooped up in tiny room with a small porthole, a worn out bed, and crowds of people smoking by the elevators didn’t appeal to me.

With some trepidation I booked a room on the inaugural Eastern Mediterranean cruise of the Celebrity Silhouette.  It was too good of a deal to pass up, especially since we were already going to be in Rome near the sailing date.  Somebody told me later that there were thousands of cancellations by Americans after Bin Laden was killed by Navy Seal Team Six.  People were afraid of a possible Al Qaeda backlash I guess.

From the moment I stepped on board my misconceptions evaporated.  This new ship was an enormous five star resort hotel on water.

The world’s people were represented on the ship.  They were not represented very well, and certainly not proportionate to size of population. The ship departed from Rome, so there were many Europeans, probably 80% or more, and not very many Americans (as compared to a typical Caribbean cruise).  A ride in the elevator or a trip to the café was like a meeting of the General Assembly of the UN without the translators.  You never knew what language you were going to hear – Italian, French, Spanish, British, German, Chinese, Polish, or something I didn’t recognize.

Americans have a reputation as being loud and obnoxious travelers, but on this ship there was no national monopoly on that behavior.

It started with the Serbian in the cabin next to me who started smoking on his veranda.  We were very near the front of the ship, and his cabin was just forward of mine.  This meant that because of the movement of the ship his smoke blew backward into my veranda.  He would also spontaneously burst into snippets of operatic arias several times per day.

The French and Italians jockeyed for supremacy in the high art of reserving deck chairs.  They would scamper out first thing in the morning and put their towel and book on all of the best chairs, ignoring the rule against this selfish act.  When I wanted to sit in a chair, I simply moved the towel on the deck and sat down.  Being an innate rule-follower, if I was confronted, my strategy was to invoke the rule and tell the chair hog to go see the pool butler.  I never had to follow through.

The British were continuously getting lost on the ship and loudly arguing among themselves.  I would walk through the restaurant to find my morning allotment of fresh squeezed orange juice to hear the following conversation.

“Yer bloody daft, woman, tis over there.  Can’t you read the signs.  Aft is that way!” said the man.

The captain of the ship is a Greek with a dry sense of humor.  Every time he spoke on the loudspeaker he had some deadpan joke to throw into the daily report.  During the opening night show, he introduced the senior crew members and noted disdainfully that some of them weren’t Greek. He said the officer who was second in command had the responsibility to lead the ship when he went to party.

There was also a smattering of Germans, Russians, and Scandinavians.  However, I saw few passengers who were not white Western Europeans or Americans.

The crew was a different story.  The cabin stewards were typically Indians.  Most of the waiters were Filipinos.  The European crew was mostly from Macedonia or Slovenia.  South America was represented by Peru and Chile as coffee bar baristas.  The only black people on board were bartenders from Jamaica (Ya mon! Red Stripe for me!).  There were no Chinese among the crew.  Their poor young workers are stuck in China making all of the goods sold at Walmart.

There were no black Africans (other than a couple of South Africans), Arabs, Pakistanis, or Indonesians.  In these times of Islamist fanatical terrorism, I suppose it would be unsettling to American or Western European passengers to be served by someone like that.  It’s hard to enjoy your vacation and forget the cares of the world if you suspect the waiter might have a suicide vest.

The Celebrity Cruise Line probably has very tolerant employment policies which are open to all.  The workers have to speak at least some English, be willing to work for peanuts, and be gone from home for months at a time.  That must restrict their pool of available workers.  But as I noticed when getting on the ship, perception is everything.  The ship must be perceived by the passengers as safe, welcoming, pampering, and relaxing.  No potential jihadists need apply.

All of the service crew were excessive polite and gracious.  It must have been drilled into them nonstop during training.  It made me feel like a colonialist.  I was the Governor General of this colony and I didn’t have to make the bed or put my dishes away.  I did, however, put the toothpaste on my toothbrush.

The excessive politeness was robotic at times.

“Good morning, Mr. Steve.  How are you today?” asked the stateroom attendant as I left my room.

“Fine, thank you,” replied the attendant.

After walking 10 yards down the hall, I realized I forgot something in my room, so I went back.  Less than two minute later I saw the attendant again.

The advertising for cruises usually show some photogenic couple lounging poolside, eating gourmet meals, and dancing the night away.  The man is typically a distinguished looking CEO type in a GQ suit.  The woman is always quite a bit younger, a big haired trophy wife with a big diamond ring.  The ads are meant to convey the idea that cruising is glamorous, exciting, and extraordinary.  If you go on the cruise, you will enjoy yourself like them, look like them.  You will be them.

I didn’t see anybody like that.  I’m sorry, but I must call it like it is.  I saw lots of fat, ugly, old people.  They weren’t just Americans.  Europeans have definitely caught up to us Americans in the obesity department.

I saw few young adults, and only a handful of children. They were some honeymooners, but younger people typically can’t afford to go on a cruise.  They’re working hard to start a career, buy a house, and raise a family.  Only richer, older people can indulge themselves in a week or more of gluttony, sloth, and late night karaoke contests.

It’s funny how you see the same people over and over on the ship even though there are 2,800 passengers on board.  Like the old Chinese man with the mysterious scar on his head, the typically loud know-it-all New Yorker, and a Russian guy who looked like either a mixed martial arts competitor or the muscle for the Moscow Mafia.  We kept running into one particular American couple and one night had a long and interesting conversation with them.  We also got to know a very nice Portuguese couple.  It’s good to make new friends.  But what I want to know is why is it that I saw the beautiful young Italian supermodel-type woman in the string bikini only once in twelve days, but saw the current champion of the world’s ugliest woman contest three or four times every day?

I did see lots of fat old women in strange looking swimwear lying in the sun with their pale white wrinkly skin getting completely fried.  Here’s a beauty tip: given your age, body type, and weight, getting sunburned or even deeply tanned will not make you more attractive.

I saw old men with enormous tanned pot bellies protruding over their tiny Speedos smoking cigars while drinking beer and reading Italian men’s magazines.  Once per hour they flipped over and rocked from side to side on their rounded bellies with the movement of the ship.

One time I walked out of the café and glanced to one side and saw a large woman sunbathing topless.  She had large dark, flat nipples, and quite a pair.  Wow, I knew there were lots of French people around but I didn’t think this was that kind of ship…  On closer inspection (but not too close…) I realized that it was a man with his head covered by a towel.  Yes, he had man boobs! From a distance they looked almost like woman boobs.  Dude, either wear a man-bra or put a shirt on before some teen-aged boy takes your photo with his cell phone and it goes viral.

And please, Ms. Middle-aged Italian woman, if you’re going to wear that small of a bikini and lie on your stomach, please get a full wax job first…