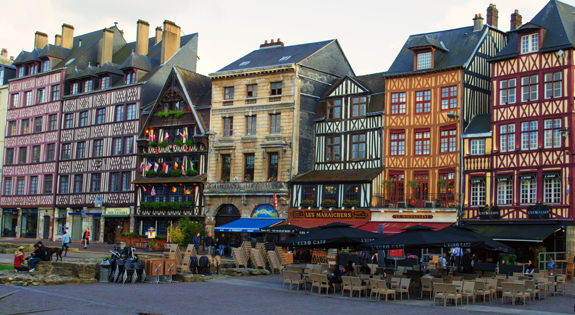 After stopping in Giverny I headed northwest to the French coast. Where the Seine River meets the English Channel is the old fishing village and port of Honfleur.

In the 1300s, French ships left from Honfleur to raid the English coastline during the Hundred Years War. The English returned the favor by capturing Honfleur and occupying it for many years. Eventually the French got it back and it became one of the most important French ports for hundreds of years.

Many French explorers left from Honfleur to discover the world. In 1608, Samuel de Champlain sailed from the port, crossed the Atlantic Ocean, sailed down the St. Lawrence River, and founded Quebec.  I found this out by reading a plaque on a five hundred year old building next to the port.  The Honfleurais are very proud of Champlain.

What I didn’t see on any plaques was the fact that Honfleur was one of the five key ports of the slave trade in France in the 1600s and 1700s.  Ships sailed between Honfleur, Canada, the West Indies, the West African coast, and the Azores Islands.

The old port is centered on a man-made water enclosure called the Vieux Bassin.  This area provided shelter to the sailing ships and kept them safe during big Atlantic storms.  Many of the buildings around the Vieux Bassin are hundreds of years old.  They are painted different colors and the collection looks artistic.  This attracted Impressionist painters like our friend Claude Monet, and a native Honfleurais named Eugène Boudin.

Since this was an old port, I explored the old back streets looking for some grog.  All I found instead were expensive saltwater caramels.

Next I drove to the city of Rouen to have dinner with a friend. In the Middle Ages Rouen was one of the largest and most prosperous cities in Europe. The Anglo-Norman kings ruled England and parts of France from here in the 11th through the 15th centuries. Some houses surviving from medieval times were made in a half-timbered style that is also found in the oldest parts of York, England.

Unfortunately, almost half of the town was destroyed during World War II. Today, the existing medieval buildings are intermixed with a lot of very ugly 1970s concrete boxes. Thus, the charming character of the town is completely gone.

The third, and perhaps most well-known item, is that it was here in 1431 where Joan d’Arc was burned at the stake. The site is now marked by a plaque noting this historical event, so that tourists can have their photograph taken at the spot where another tourist was horribly murdered hundreds of years ago. (I may have my French history a little off there….)

It was indeed a hot spot. Not much else was going on in Rouen.