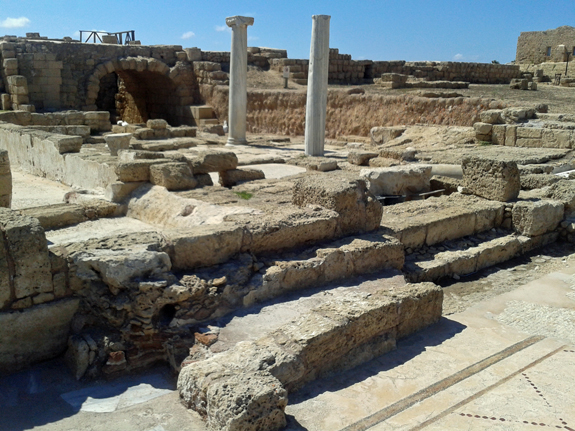 “If I am a wrongdoer and have committed anything for which I deserve to die, I do not seek to escape death. But if there is nothing to their charges against me, no one can give me up to them. I appeal to Caesar.” Acts 25:11.

The apostle Paul had been arrested and was in prison for two years in Caesarea. Festus, the new Roman governor, wishing to do the Jews a favor, asked Paul if he wanted to go to Jerusalem for trial. Paul replied that he should be tried before Caesar’s tribunal. Festus replied “To Caesar you have appealed, to Caesar you shall go.”

I was standing at the site of the Roman governor’s palace on the coast of the Mediterranean Sea in Caesarea, Israel. I was in the ruins of the outer courtyard. This was the place where official business was carried on by Festus and the other governors. This was likely the very ground where almost 2,000 years ago Paul appeared before Festus.

Caesarea was built by Herod the Great in 25-13 BCE upon the ruins of earlier Phoenician settlements begun in 586 BCE during the Persian era. It was the administrative center for Judea in Roman times. It was a planned city with a network of crisscrossing roads, a temple, hippodrome, amphitheater, markets, and residential quarters.

Some of the villas must have been magnificent, with mighty columns and a view to the Mediterranean Sea.

Even today fancy floor mosaics are still visible among the foundations of the excavated building ruins.

Every five years the city hosted major sports competitions and gladiator games in the hippodrome, and theatrical productions in the amphitheater overlooking the Mediterranean Sea.

As I walked around the U-shaped hippodrome, I imagined what it must have been like back then. Twelve thousand spectators found their seats in the stands while the rich and powerful people sat on the special viewing platform at the finish line. The chariots lined up at the starting line for the race to the tight U-turn where fortunes could be won or lost in a heartbeat.

The city flourished from Roman times into the Byzantine period of 324-638 CE, but Caesarea lost its political and economic significance after the Arab conquest in 640 CE. It was conquered by the Crusaders in 1101 and fortified with massive walls and a dry moat by King Louis IX of France in 1251. Conquered again by the Mamelukes in 1265, Caesarea was destroyed and deserted. Its ruins became a source of lime and building stones for the region over the centuries.

Despite the destruction, the 4,000 seat theater is still standing. The day I visited, preparations were being made for a concert by one of Israel’s top singers. The stone ledges looked like uncomfortable seats for a long show. Do you think they had stadium cushions in Roman times?