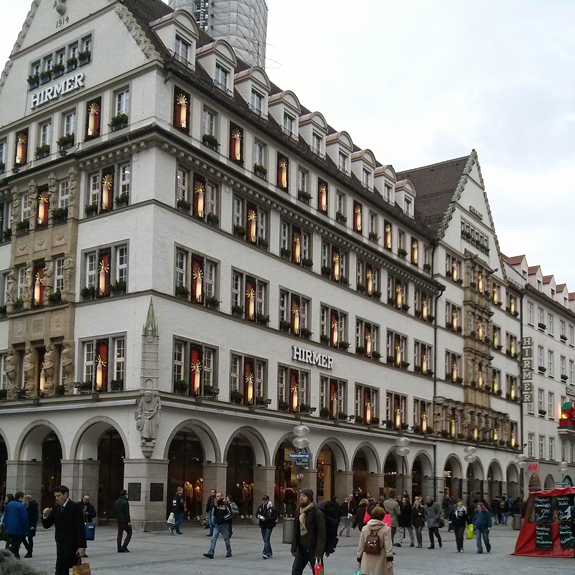 After spending six months living as an expat in Munich in 2013 I had come to know and love the city. It’s a great place to visit, but an even better place to live (except for the weather….).

On my first afternoon back in town I wandered the streets of the Haidhausen district. The day was brisk but with a sturdy leather jacket on I was warm enough as I window-shopped. I stopped for a latté (yes, I drink coffee now, blame it on the last Christmas present I gave to my wife – an espresso machine) and sat outside to watch the Saturday shoppers get their purchases in before the stores closed on Sunday.

“You know, I don’t believe I want to live in a country where you have to stay open on Sunday to do business. You shouldn’t have to work on Sunday.” (See That Thing You Do, you’ll be glad you did).

The Germans keep the tradition of Sunday closures going. I think it’s a good thing.

Despite it being November, the sun peaked out from the clouds for an extended stretch of time. Between the sunshine and the coffee I got so warm I had to take my jacket off. Everyone else walked by bundled up in boots, heavy coats, scarves and hats. Bavarians seem to do that whenever the temperature drops below 60 degrees Fahrenheit or the calendar says it’s no longer summer.

Sufficiently jazzed on caffeine, I walked over to the Ostbahnhof (east train station) and caught the U-bahn (subway) to the city center. On the way I dutifully stopped and waited (as I learned to do in Berlin) at all of the “don’t walk” pedestrian lights, even if there were no cars in sight. Because that’s also what you do when you’re in Munich.

At Marienplatz (the main square in Munich), I spied the glockenspiel on the Rathaus (city hall), but the figurines were still and silent at this time of day. Since Oktoberfest was over, there were very few tourists in the square. Instead, local residents were crowding into the smaller shops and big department stores to start their Christmas shopping. Unfortunately, the big, outdoor Christmas Market (Christkindlmarkt) was not yet open. The Christkindlmarkt is a big street market associated with the four weeks of Advent. It started in Munich in 1310. I’m sure they sold different stuff back then. Or maybe not…

I missed my chance to drink glühwein again (first tasted in Seefeld, Austria, but that’s ok. Drinking hot wine while outside in winter in a cold climate is not my favorite pastime anyway.

Seeking some fortification after surviving on airplane food for the previous day, I went into the Augustiner Restaurant, a Munich landmark that is the prototype of the Bavarian beer garden. The monks started brewing beer here as early as 1328. I ordered a half liter of hefeweizen (wheat beer) and peered at the menu, trying to decide which kind of sausage I should have.

Deciding I had had enough sausage during my expat stay, I opted for the weinerschnitzel instead.  You can’t go wrong when ordering a good schnitzel when in Bavaria.

Aaahhhh… Schnitzel, hot fries, and a wheat beer in a Bavarian beer hall.  Seeing the men in their beer-drinking outfits of lederhosen (leather pants) and feathered caps, the women in their dirndls (dresses) with low cut blouses, and waitresses carrying giant pretzels in one hand while hoisting multiple one liter beer steins (“ein mass”) in the other, brings on a warm fuzzy feeling of nostalgia in me. And I’m not even German.

I think I need to return to Munich once a year for the rest of my life.