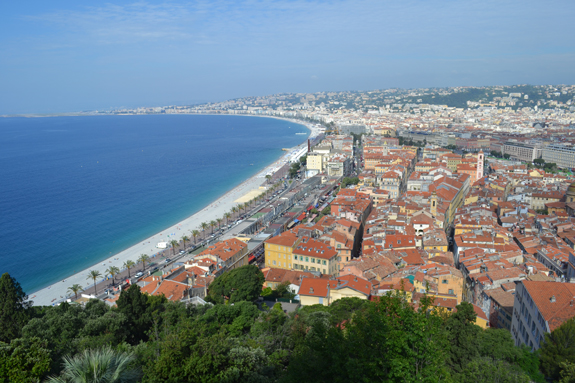 I climbed the steps on a sunny morning.  They started at the end of the Vieux Ville (Old Town) of Nice, France, one block in from the Mediterranean Sea.  I stopped every few minutes to take photos.  At every point the view was fantastic.

Castle Hill overlooks the Vieux Ville and the rest of Nice.  It is on a small peninsula splitting the Vieux Ville on one side and the port of Nice on the other.  In the Middle Ages there was a fort on the site that protected both the port and the town.

The fort was destroyed in the 1800s and a park was built on the hill.  Today it provides a good workout for those running up the steps, or even for people like me who hiked to the top to get one of the best views in the Mediterranean.

I had been to Nice about ten years ago. I had stayed in a hotel by the yacht club on the south side of the modern city.  It was a decent place to stay for a few days, but it lacked culture and interest.  For this visit I stumbled upon a small apartment for rent located in the middle of the Vieux Ville.  It was in a building at least a couple of hundred years old.  The streets were very narrow and were lined with small shops, cafes, restaurants, and service establishments for the locals.

The apartment was on the third floor.  The stairway was a challenge to navigate, since it was narrow and steep. There was no elevator in the old building. The view from the window was only of the building across the lane, but I could look down to watch the local residents shop at the patisserie on the corner.

A few yards away from the doorway to my building was another street called the Cours Saleya.  This pedestrian street hosts daily markets.  Fruit and vegetables are sold in the morning, flowers in the afternoon, and arts and crafts in the evening.  Along both sides of the street are restaurants of all kinds, with some of them serving traditional Nicoise cuisine.  Sitting in an outdoor café, eating a fresh croissant, and watching the tradespeople and shoppers is a relaxing way to take a mid-morning break.

The neighborhood of the Vieux Ville is a delight to wander around.  The middle-aged women line up outside the butcher shop to buy the main course for tonight’s dinner.  Old men drink pastis, the local aperitif, at the bar while arguing about the football news.  Trendy young women flit in and out of the designer clothes shops looking for a good deal on the latest fashions. At night the tables outside the restaurants are full of diners.  Once in a while a young man on a loud scooter speeds past the startled diners in a haze of blue smoke.

This is a working and authentic neighborhood.  Local people go about their lives in their daily routines despite the occasional group of boisterous American college students searching the back streets for good pizza.

Across the street from the neighborhood and stretching along the coast is the Promenade des Anglais (Promenade of the English). Before Nice was urbanized, the coastline at Nice was bordered by a deserted stretch of beach covered with large pebbles. Houses were located on higher ground well away from the sea, as tourists visiting Nice in the 18th century did not come for the beach, but for the gentle winter weather. The areas close to the water were home to Nice’s dockworkers and fishermen.

In the second half of the 18th century, some wealthy English people started spending the winter in Nice, enjoying the panorama along the coast. When a particularly harsh winter up north brought an influx of beggars to Nice, some of the rich Englishmen proposed a useful project for them: the construction of a walkway along the sea.

I walked the Promenade des Anglais every day of my time in Nice.  The Mediterranean Sea shined in a bright blue glaze in front of the pebbles on the shore.  Like most beaches on the French coast of the Mediterranean, even today there is no sand.  Instead, the beach consists of various sized rocks and pebbles.  Although the rocks are worn smooth, it is still quite a challenge to position the rocks in such a way as to be comfortable for more than two minutes.

That doesn’t stop the hundreds of sun worshippers from spreading out across the beach every day all summer long.  Some of the women wear no bikini tops.  This is France, after all.