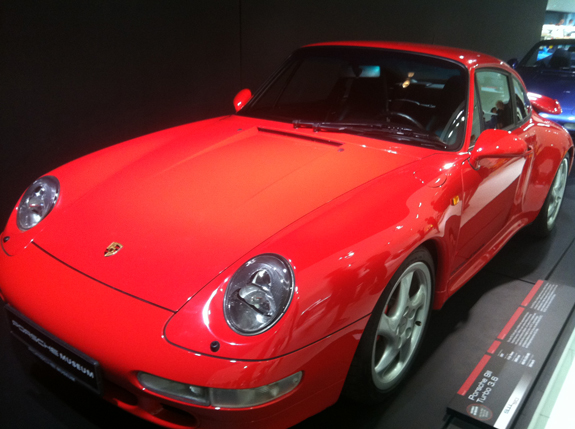 While I was driving from Dusseldorf back to Munich recently, I detoured to Stuttgart so that I could spend a couple of hours at the Porsche Museum.  The headquarters of Porsche is in Zuffenhausen, Germany near Stuttgart.  A striking museum building is set amongst the factory and office buildings.  The museum exhibits prime examples of the fine automobiles Porsche has built over the last 70 years.

The company got its start in the 1930s.  At first it was a design company and didn’t build its own cars. The German government hired Porsche to design an inexpensive car for the people.  This became known as the Volkswagen Beetle, one of the most successful car designs of all time.

After the war, Porsche designed prototypes of a car it called the 356.  The 356 was a rear-wheel-drive, two door sports car.  Because the 356 proved to be very popular with American aviators, a special version of the 356 called the American Roadster was sold in the U.S. starting in 1953.  Early designs were air-cooled, rear engine configurations.

Approximately 76,000 356s were manufactured from 1948 to 1965, with only about half of them still surviving.  They are highly prized by collectors today.

Porsche next developed a coupe design called the 356 1500 Coupé which came out in 1954.  The iconic and instantly recognizable shape of the 1500 Coupé would be carried forward to many future cars.

In the same year, the first 911 was produced.  The 911’s profile resembled the 1500’s shape and had a six cylinder “boxer” engine which produced 128 HP. While I was at the museum, there was a large exhibition celebrating the 50th anniversary of the 911.  Customers were being admitted to the museum at a reduced rate for anyone who was born in 1963 or owned a 911.  I missed on both qualifications.

The 911 evolved over the years but stayed true to its original sports car heritage.  More power and more features were added as technology improved. 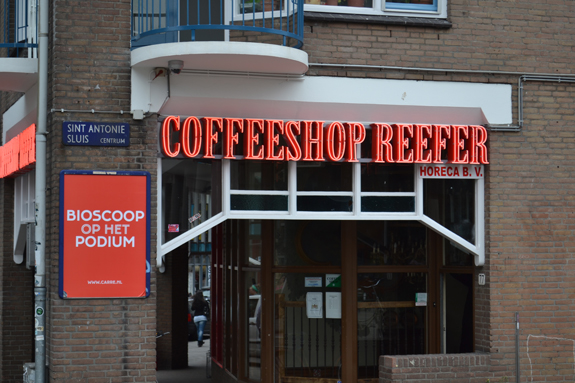 Amsterdam is known for many things.  Canals, houses that are hundreds of years old, thousands of bicycles, and diamonds come to mind.  I saw all of those things and enjoyed my time wandering around the old center of Amsterdam.  I especially liked seeing the narrowest house in Amsterdam (only six feet wide!), reading about the life of Van Gogh and seeing many fabulous paintings at the Van Gogh Museum, and having an Argentine steak dinner near the Rembrandtplein.  However, there are other more notorious things that many tourists come to Amsterdam to see.  Here are a few of the places I didn’t visit.


There are hundreds of coffee shops around Amsterdam that serve marijuana. There was a small cafe a few doors down from where I was staying. It smelled so strong that I think I caught a buzz just walking by on the sidewalk a few times every day.
I never understood why those stores were called by that name anyway. By the way, a good source for last minute airline tickets is Last Minute Tickets

I didn’t go inside the Bulldog Energy Coffee Shop, but I liked their logo on the neon sign. There were several of these coffee shops around the old city center. I don’t know the combination of chemicals that they are selling in there, but it is a popular establishment. Perhaps the essence of visiting the Bulldog is a combination of drinking Red Bull and espresso while smoking a marijuana cigarette and eating a hash brownie. So you have the energy to paddle a boat around all of the canals of the city while feeling good doing it?

A friend recommended this restaurant near the train station. I meant to go there, but never made it back to that part of the city at the right time.


Museums typically include collections of really old stuff that are supposed to be educational. What could possibly be in this museum?


I also didn’t go down the narrow, old alleys of the Red Light district, although I saw the red lights above the windows from the canal boat as it cruised by. Don’t even ask about Casa Rosso, I regret even reading about it in the guidebook.

Even though I don’t agree with the hedonistic lifestyles of some of the people of Amsterdam, I liked the city.  It’s definitely worth visiting for a couple of days on any European tour.