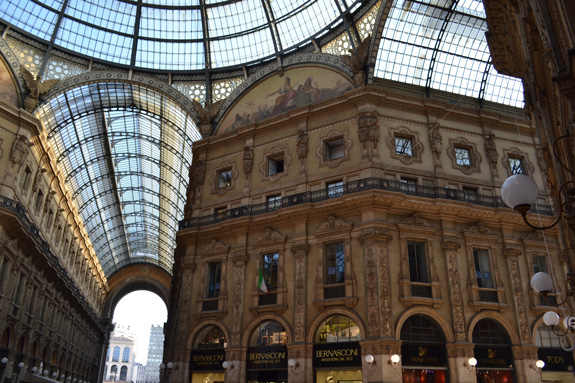 The main shopping street of Milan was almost deserted.  The famous designer’s stores were still open, but there were few customers. It was late August in Italy and many people were on vacation.  The sales clerks in the stores clearly wanted to be on vacation.  The bored stares of the well-dressed Italian girls indicated that they were counting the minutes until closing time.

It was a sweltering afternoon.  The temperature was in the mid-90s and humid.  I darted into the high priced shops to cool off.  I had no intention of buying anything.  Thank you Mr. Versace for letting me get a respite from the heat.

Milan is one of the capitals of fashion design.  Many of the shoes worn by the people of the western world are designed in the city.  The designer shops on the Via Monte Napoleone are some of the fanciest and most expensive on the planet.

None of the clothes interested me.  I was more interested in finding the nearest gelateria.  I think the flavor for me that day was stracciatella (vanilla with chocolate chunks).

After much wandering, I stumbled upon the Four Seasons Hotel.  Great, I have to go to the bathroom.  Toilets can be tough to find in big European cities when you need one.  Indeed, the lobby of the Four Seasons Hotel had the nicest bathroom in Milan based on my unofficial survey of one location.  Black marble, gold faucets, and individual cloth towels to dry your hands.  Excellent.

I took a seat in the lounge.  My feet hurt and a few minutes rest would do me good.  I was thirsty too.  Perhaps some needed liquids would perk me up so I could continue my tour of the old part of Milan.

“Good afternoon, sir.  Welcome back to the Four Seasons,” he said in a perfect BBC London accent. “What would you like, sir?”

It was actually my first time trespassing in this particular lobby, but I’m not telling. What I would like is to look like him and speak like him, neither of which was going to happen.

“I’ll take a look at the menu and let you know,” I said.  I was a little annoyed that he spotted me for an American.  Of course, the big camera around my neck and the baseball cap didn’t help my disguise.  I picked up the drinks menu on the table.

One peak at the menu and I knew I was in the wrong place to get something to drink.  A can of Coca-Cola was 11 euros.  That was about $16.  The same can back home at the grocery store would be between 30 cents and 45 cents, depending on whether you’re buying a twelve pack or a 24-pack, and depending on the sale.  Even less for a Big Gulp at 7-11 on a cost per ounce basis.  I guess location makes a difference.  It was a nice lounge, but not that nice.

The mission to satisfy my immediate bodily needs was accomplished.  When the waiter was looking the other way, I sneaked out of the hotel.  I would get a drink somewhere else.  Maybe even at McDonalds. 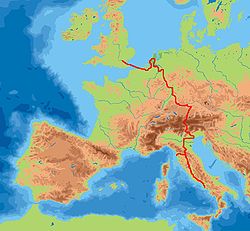