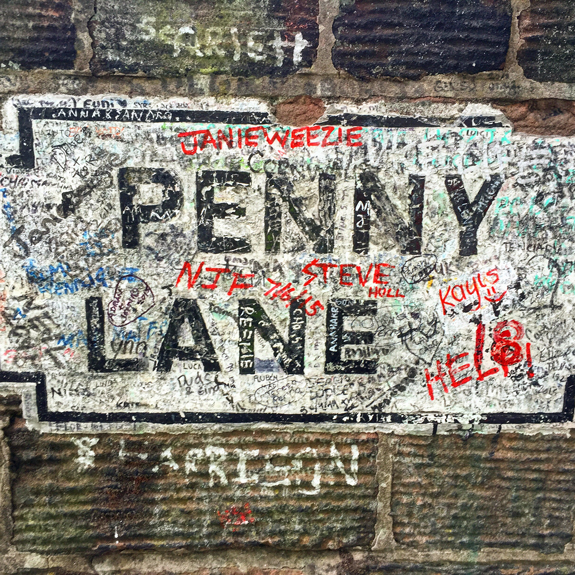 I’ve always liked the Beatles. When I was a kid we had the two Beatles greatest hits albums (the red one and the blue one, to those in the know). We played those records until the grooves wore out.

Likewise, I’ve always been fascinated by the Beatles story. There are many great bands in rock and roll history, but none that have the extensive lore that captured the essence of the times when the band rocked the world.

On my latest trip to the UK, I knew I had to finally go down to Liverpool and see for myself where the Beatles came from and how Beatlemania got started.

My first stop in Liverpool was the Beatles Story Experience. The museum is on the side of the Mersey River at a place called the Albert Docks. The once decrepit shipping docks have been renovated to be a tourist destination, with several museums, stores, restaurants, and cafes.

The museum tells the complete story of the Beatles from their earliest beginnings in Liverpool in the late 1950s to the break-up of the band in 1970. Each small room re-creates a time and place in the band’s story, complete with many authentic artifacts from that period. One walks from the place where they met, to Liverpool’s Cavern Club, the Hamburg clubs, Brian Epstein’s record shop, the Merseybeat movement, London’s Abbey Road recording studios, the British Invasion of America, the landing at JFK airport in New York, the Ed Sullivan show, and so on. Although most of the displays are static, their songs are played at different times, and the audio guide provides context and interesting tidbits about the band. It was an enjoyable and informative visit, both for longtime Beatles fanatics and casual fans.

With the Beatles story properly refreshed in my memory, I now wanted to see some of the actual sites for myself. The next morning I called Phil of Liverpool Cycle Tours. I interrupted Phil’s breakfast to inquire as to whether I could take his bike tour that afternoon. Despite being the only one to sign up for the tour that day, he agreed to show me around.

Our first stop on the bike tour was the Liverpool Institute, where Paul McCartney and George Harrison went to school. There is a statue of a pile of guitar cases out front to commemorate their time at the school. Appropriately, the statue is called “A Case Study.” Next was one of the grammar schools attended by Lennon, which is still in operation and thus was not very interesting. A simple plaque on the exterior wall notes Lennon’s attendance. Phil explained that Lennon was a poor student. He was known as a ruffian, a trouble-maker, and a daydreamer. As a tour guide, Phil was full of good information about the four lads from Liverpool.

I always thought of the Beatles as poor, working-class boys from a rough city neighborhood in post-war Liverpool. They certainly weren’t well off, but they actually grew up in the suburbs. As a child Lennon lived with his Aunt Mimi at a house called Mendips on very respectable Menlove Avenue in a suburban area known as Woolton. The house was bought by Lennon’s widow Yoko Ono and donated to the UK’s National Trust. The house is also not open to the public.

Paul McCartney’s childhood home is a few blocks away at 20 Forthlin Road in nearby Allerton. It is also preserved by the National Trust and is not open to the public. Many of the early Beatles songs were written and rehearsed in the front and back rooms on the first floor of the house. Phil told me how McCartney’s father was strict and would double lock the door if Paul and his brother Mike wouldn’t come home on time for dinner. One of the boys would climb up the drainpipe to get into an upstairs window in order to get in.

Phil and I then rode down Penny Lane. Lennon and McCartney took a fair amount of poetic license in describing the places in the famous song by that name. There is a fire station nearby, but it’s not actually on Penny Lane.  Neither was there a barbershop on the street. The short suburban street is quite nondescript and does not exhibit the busyness one would expect from the song. Fans have stolen the street sign for Penny Lane so many times that now the only authentic sign is the one on a stone wall. As you can see in the photo it has been defaced by the fans.

After a Guinness at a pub on Penny Lane where the Beatles once hoisted a few pints, we rode up a hill to St. Peter’s Church Hall in Woolton, where John Lennon first met Paul McCartney on July 6, 1957. Lennon’s early skiffle band called the Quarrymen was playing there at a garden féte. The hall is still being used today. The site is marked by this stone plaque.

We walked across the street to the cemetery next to St. Peter’s Church.  As we sat there on a low stone wall, Phil pointed out a headstone in the cemetery where the name of Eleanor Rigby is engraved.  According to McCartney, the original figure in the Eleanor Rigby song was called Daisy Hawkins.  He later changed it to Eleanor Rigby after a British actress of the time and the name of a store in Bristol. McCartney has said he may have been subconciously influenced by seeing the headstone, at some point, because he and the others used to hang around the area.

The last stop of the 17-mile bike tour was at Strawberry Field, made famous by Lennon’s song “Strawberry Fields Forever.” Strawberry Field was a Salvation Army children’s home near Lennon’s house. As a child Lennon played with the kids there and in the grounds.  Much of the land has been transformed into housing, and the original gates were removed in 2011 and replaced by a replica. Even so, it made for an interesting stop.

That night I walked over to the Cavern Club. The Beatles played the original Cavern Club 292 times from 1961-1963. This was where Beatlemania started. The club was in the basement of an old warehouse.  It was down several flights of stairs. It was tiny, dark, hot, and humid in the club. Fans would pack it until hardly anyone could move. The original club was closed in 1973 and filled in during construction of an underground rail line. A new club was opened at the same address in 1984, using the original plans and even some of the same bricks.

It wasn’t too crowded when I first got to the Cavern Club at around 8pm. A local solo performer was banging out 60s hits from the famous stage at the end of the room. Next, a pop quartet fronted by two women called the Mona Lisa Twins cranked out early Beatles hits note for note. They were very good, and it was a different sensation to hear the vocals sung by women.

By the time the Cave Dwellers took the stage at 11pm, the place was jammed and rocking. The Vox amps were blasting and my ears had had enough.

Beatlemania lives on in Liverpool.