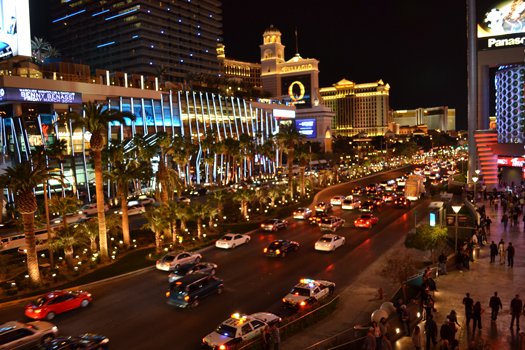 I was looking to my left at the stretch party limo slowly cruising neck and neck with the yellow Lamborghini when the man bumped into me from the right.  He didn’t say anything, he merely grunted and stared at me with a glazed look in his eyes.

He was dressed in raggedy old clothes, layer upon layer to retain warmth. It can actually get cold in the desert at night.  I thought he must be one of our unfortunate citizens who live on the streets and scrounge for beer money by redeeming cans and bottles.  He smelled like a vomit and gangrene cocktail.  His hands were filthy and what was left of his wild brown hair stuck out in tufts on one side of his head.  The other side was a bare wasteland of cuts, bruises, and old scars from fighting for the last drop from the wine jug.

It was his face that screamed for help.  It was covered in blood.  The blood had congealed somewhat around his nose and eyebrows, but otherwise was still fresh and dripped down his jaw to pool on the collar of his stained shirt.

Before I could do anything he grunted some more and shuffled ahead of me.  I silently trailed him while I tried to think about my options. The sidewalk crowds were heavy and the man had to push his way through.  Most people coming from the other way glanced at him, did a double take, and then avoided getting anywhere near him as they passed.

Then a group of rowdy young men, who had obviously been drinking heavily, crossed the guy’s path.  They looked at the bum and then at each other and I thought there might be some trouble brewing.  Maybe these tough looking dudes thought beating up a wino would be fun.  Instead they broke into wide sloppy grins and started giving the guy “high fives.”

“Way to go dude!” said one of the young men.  “That’s awesome!” said another. “You’re the best zombie on the Strip tonight!” said a third.

The guy smiled, grunted, and shuffled along.

This scenario was repeated many times as I walked behind the guy from the MGM Grand all the way to the Venetian.

Just another Saturday night in Las Vegas.  Where the Walking Dead go to party.

Do not forget to make sure you have a valid ESTA before your trip to the US!