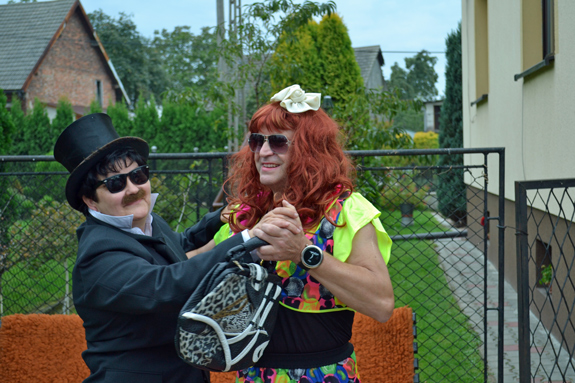 My extended family in Poland really knows how to throw a good party.  We were staying with my aunt and uncle in Laka, a small village near the town of Pszczyna in southern Poland.  Since we were there, they decided to invite my other aunts and uncles and all of my cousins to a big barbecue party. Many of the cousins didn’t see each other regularly despite living only a few hundred yards from each other.  I hadn’t seen some of my cousins in 13 or 27 years.

It was a Saturday in September and one of the last good days of summer.  Around 1pm one of my cousins started a wood fire in the grill.  After he had some hot embers, he mounted two giant hams on a large spit.  He tended the fire the rest of the day.  I started calling him the Grillmaster.

Everyone arrived around 3pm.  The hugs and kisses seemed endless.  Then it was time to party.  The first thing on the agenda was to eat dessert.  In Poland, the dessert is often served before anything else.  Many kinds of home-made cakes were brought out of the secret basement pantry.  Tea and coffee were served.

The polka band started playing during dessert.  The band consisted of my cousin’s two sons, Martin (17) and Kuba (12).  Martin played the accordion and Kuba played the bass drum.  The boys played with spirit and energy.  Polka songs all sound the same to me.  Still, it is happy music and great for getting a party going full steam.

The first wood smoked ham was ready.  It was taken off the spit and sliced with a giant carving knife.  It tasted delicious.  The aunts had prepared potato, rice, and cabbage casserole dishes to go along with tomatoes from the garden.  I skipped all of that to concentrate on the ham and fresh bread.

Cases of Zywiec beer appeared.  Since I was there, some of them were actually stored in the fridge to be cold for the American guest.  The rest were room temperature.  Some people mixed beer with a couple of different things.  Some people liked their lukewarm beer with a fruity syrup.  I tried that and it tasted awful!  Others poured half a glass of beer and then dumped Coke into it.  I didn’t try that because it just looked bad to me.

After dinner it was time to drink vodka shots and some combustible Greek aperitif that tasted like it should be used to scour the barnacles off of a ship’s hull.  During the drinking I noticed that quite a few of the family had disappeared from the table.  I thought that’s pretty normal when 40 people are gathered.  Some people have to fix more food, make phone calls on their new cell phones, or walk off some of the beer and vodka buzz.

Then the band started up again and a dozen people danced out of the house.  They were dressed up in costumes like it was Halloween.  We had a Native American chief, Charlie Chaplin, cowboys and cowgirls, women dressed as men, and men dressed like the prostitutes I saw standing by the side of Polish highways.

The costumed people danced with wild abandon.  They brought the party to life.  They got everyone to leave the food tables and dance like crazy people.

When we were all tired out from dancing, the second ham was ready to eat.  We all sat down to a second dinner.  This time we also had Polish sausage and some strange substance that was cooked on the grill in tinfoil.  I thought I’d try some of that mystery food.  It turned out to be blood sausage.  I took one bite and that was enough for me.  It was nasty stuff.

As the sun set, more beer was consumed, more vodka shots were downed, and the conversations got louder and funnier.

Everyone enjoyed being together again, like in the old days when we were all so much younger.  Time passes but the bonds of family remain.

To see a short video of the Polska Polka Party dancing, click here.

Today is a national holiday in Poland.  The holiday is to commemorate a battle during World War II.  The president of Poland is on TV giving a speech, before a military parade starts.  It does not make for exciting television.  We are hanging around Uncle Stefan’s house.  Because it is a holiday, everyone is off work, and all of the stores are closed so it doesn’t make sense to go to Pszczyna.

It is cold and very windy today, more like October weather than mid-summer.  So we have stayed indoors mostly, eating, talking, watching funny videos on the computer, eating, talking, and eating some more.  For lunch we have had a big meal because of the holiday.  Of course, we have had several courses of desserts too, at different times during the day.

In the evening I walked around my aunt Bronka’s garden.  It is very big and immaculately tended, with many flowers and vegetables.  I raided her raspberry patch for an impromptu dessert.  I checked out my grandfather’s shop room in the old barn.  There was a rusty old lock on the door and I wondered why it was locked. Perhaps something valuable was now stored in there. Earlier, the uncles were instructing me that I should have locked the doors to my rental car, because anyone could walk by and get in the car and do something to it.  (They had already been sitting in the car themselves).  I didn’t think crime was a problem in Laka, but they assured me that it was.  Of course, they had already had several rounds of vodka, so I wasn’t sure if I should take them seriously.

After studying the locked door situation, I discovered that the key to the old lock was on a key ring hung by the door.  I picked the most likely looking candidate and promptly unlocked the door.  So much for security.  I was a little disappointed to find that it had been cleaned out.  My grandfather had a lot of old stuff in there that he worked on.  It has been 20 years since he was there, so I guess it is no surprise that they would use the storage space for something else.

The old outhouse is still set next to the barn.  Edward claims it is a museum piece, although I’m not sure what museum would take it.  The Museum of Old Wooden Polish Toilets?

I knew by looking at the map that it was going to be difficult driving out of Vienna to go the direction we needed to go.  Vienna, being such an old city, has no proper outer ring freeway, no straight streets, no grid, no obvious commuter routes, and lots of pedestrian zones, squares, and one way streets.  I won’t say we were lost, because I thought I knew where we were most of the time, but I couldn’t figure out how to get there from here most of the time.  Eventually we escaped the confusion and got on the right road out of the city.  It wasn’t the autobahn that we needed, but generally in the right direction. After zig-zagging through the villages and wine country of northern Austria, we linked up with the freeway.

When we got to the border of the Czech Republic, there were police there to check our passports.  I didn’t think they did that anymore after the Czech Republic joined the EU.  After a few minutes delay, we were on our way.  (The thing happened at the Polish border)  There is a marked difference in the quality of the roads around here.  The German roads were superior in every way.  The autobahns and other roads have smooth, new surfaces, easy to read signs, and rest stops, gas stations, and restaurants every few miles. The Austrian roads were not quite as good.  The Czech roads were bumpy, and typically under construction with lengthy detours through small towns.  We were hungry for lunch, and couldn’t find anywhere to stop to eat other than getting candy bars in a gas station.

Once we got into Poland, we drove on a smooth new highway from Ciescen towards Bielsko.  But after that, we turned off onto an old, bumpy road.  We navigated our way to the small village of Laka, where my extended family lives.  I was pretty sure how to get there, but knew we would have to look carefully at the street signs once we got close.   As we slowed down coming in to Laka, there was my niece Dorota on the side of the road waving at us!  She had come down their street to look for us just a couple of minutes before.