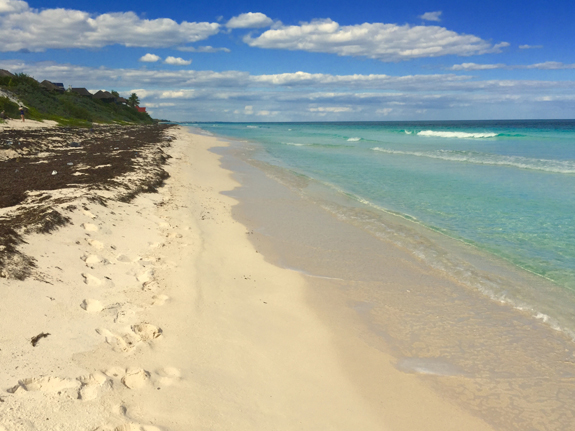 The man and woman got into their rental car on a lazy Sunday morning in the hotel zone of Cancun, Mexico. A drive down the coast of the Mayan Riviera was ahead of them. Sunshine, blue sky, warm sand, taco chips and salsa.

Boulevard Kukulkan was nearly empty of cars. Most tourists were sleeping off their margarita induced comas. Hotel vans and taxis sped by the rental car, maximizing their potential of tips by rapidly getting their passengers where they needed to go. The man, however, drove slowly, sticking to the posted 70 kilometers per hour speed limit. He had read about how corrupt the Mexican police were and wanted to obey the law.

After slowing down to take a sharp turn, the man accelerated back up to the speed limit. As he was daydreaming about which beach to go to, the siren came to life and the flashing lights came on. It was the Mexican police.

Obediently, he pulled over and stopped. The police car stopped close by, blocking his potential escape. The policeman in the passenger seat got out of the car, leaving his partner behind the wheel. Inexplicably, another police officer sat in the back seat. This police officer smiled at the man, like it was his fourth birthday, or maybe he had found a winning lottery ticket.

The policeman rattled off a stream of Spanish at the man, who stared blankly back.
“No hablo español,” said the man. “Inglés por favor.”

“You’ve been speeding,” said the policeman.
“I don’t think I was. I see that the posted speed is 70 km/h on this road. I was sticking to the speed limit. I even slowed down to take that turn,” said the man.
“The speed limit in this stretch is 40 km/h. You were going faster than that. I am going to have to give you a ticket,” said the policeman in heavily accented English.
“I never saw a sign for 40 km/h.”

The policeman ignored this remark and started writing the ticket.

“Why are the taxis and hotel vans going twice as fast as me, but I am the one being pulled over?” asked the man. This comment was also ignored.

“You will have to go into the city tomorrow and pay this ticket. On the other hand, I can save you the trouble if you pay the fine to me right now,” said the policeman.

“How much is the fine?”
“$150 US dollars.”
“Why isn’t the fine in Mexican pesos?” asked the man.
“Never mind that. Give me $150 US dollars, or I will take your driver’s license. Then you can go to the police station in Cancun tomorrow, pay the fine, and get your license back.” The other two police officers in the car were smirking at the man.

The policeman grabbed the money, and got back into the police car.

“Cheap bastard!” grunted the policeman as the car took off, looking for the next gringo victim.