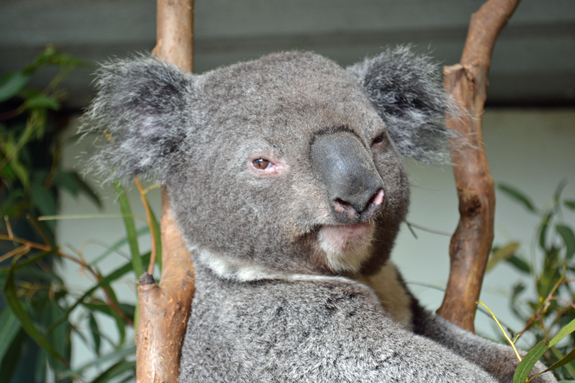 Australia has some amazing animals not found anywhere else in the world.  At the Featherdale Wildlife Park outside Sydney, I was able to get up close and personal with some of them.

Koalas are not really bears, they’re marsupials.  Some koala fossils have been found that are 50 million years old.  They have two opposable thumbs on each hand, and are one of the few mammals that have fingerprints.  The male koala has a bifurcated penis.  I’m not sure what that is, but I don’t think I want to know.  It must be related to the fact that the female koala has two vaginas and two uterii.  Two times the fun.  The koalas are the only animals on earth whose brains have shrunk over millions of years to the size of two walnuts, and the rest of their skulls are filled with fluid.

The kangaroo is the national symbol of Australia. There are over 50 different kinds of kangaroos.  They are the only large animal that use hopping as a method of transportation.  Of course the female kangaroo has a pouch to hold her baby, called a joey.  Joeys live in the pouch for up to nine months after birth. Male kangaroos are known for fighting.  They usually fight over females and drinks, just like humans.

A common myth about the kangaroo’s English name is that “kangaroo” was an Aboriginal phrase for “I don’t understand you.” According to this legend, Captain Cook and naturalist Sir Joseph Banks were exploring the area near Cooktown when they happened upon the animal. They asked a nearby local what the creatures were called. The local responded “Kangaroo”, meaning “I don’t understand you”, which Cook took to be the name of the creature.  Alas, linguists have proven that this is not a true story…

The kangaroo has adapted very well to the arrival of Western settlers.  Today there are more kangaroos than ever before, and more kangaroos than people in Australia.  They’re shot for meat and hides, and to protect grazing land.  I had a kangaroo steak in a restaurant in Port Douglas.  It was excellent and tasted similar to venison.

A wallaby is any one of the thirty species of small kangaroo.

The wombat is a four-legged marsupial that digs lengthy burrows in the ground with its rodent-like teeth and powerful claws.  Since the wombat is on all four legs close to the ground (unlike the kangaroo hopping on two big rear legs), it’s pouch is backward facing.  This means that while digging, the mother wombat doesn’t gather dirt in its pouch on top of the joey. Ingenious!

Wombats are the prey of dingoes and Tasmanian devils.  Their main defense mechanism is a hard butt.  When threatened, they dive into a tunnel head first.  Their butt consists of a toughened hide overlaying cartilage. This might help them withstand the dingo’s bite.

Startled wombats have been known to charge humans and bowl them over.  Watch out!

Kookaburras are best known for their unmistakable call, which sounds uncannily like loud, echoing human laughter.  This sound is used in jungle settings in many TV shows and movies, even when the show isn’t set in Australia.  Maybe the sound editor should learn some zoology.  As we all learned as children, the kookaburra sits in the old gum tree.  And those trees (eucalyptus) are mostly found in Australia.

I don’t know what kind of bird this is, but it has a personal attendant to take care of its tail.

The little penguin is the smallest species of penguin.  They are about one foot tall.  They spend their days fishing in the Southern Ocean.  At dusk they go back to their colony on shore and tell their wives stories about the big ones that got away.  They don’t mention how much beer they drank.

Sydney is best known for one thing: the Opera House. This iconic building gets most of the attention for the city. Its image is on postcards, calendars, shirts, caps, shot glasses, and key chains (of course, all of these souvenirs are made in China). It certainly is stunning and a “must see” while in Sydney. However there are other things to experience in Australia’s first city.

Sydney sprawls across countless bays and the entire metropolitan area is enormous. The highlights are mainly in or near the city center, called the Central Business District (CBD). Four days are the right amount of time to see these sights.

Day One
Head straight to the Opera House. Tours are available for those interested in the architectural design details or the inner workings of an opera house or a symphony hall. If you’re like me and that’s too much information, simply walk around the building and stare at its magnificence. How did the architect come up with this?

From the Opera House, watch the sailboats go under the Harbour Bridge. If you’re adventurous, tackle the bridge climb that sends people walking over the top of the bridge. For a more sedate experience, go next door to the Royal Botanical Garden. It’s a large park with excellent views across Botany Bay. See the old eucalyptus trees and Mrs. Macquarie’s chair. Mrs. Macquarie was the wife of an early governor of Australia. She used to sit on a chair on a point overlooking the bay and watch the ships sail in.

Stroll back into the CBD and head to the shopping district. Take a ride up the Sydney Tower for a nice meal, a drink, or just to enjoy the view over the city from a revolving restaurant. Before the chain stores and well-known brands took over, there were two distinctive shopping buildings in old Sydney. The Strand Arcade is Victorian style shopping building built in 1891. The Queen Victory Building is Romanesque style building completed in 1898. Don’t ask me to tell you the difference…. Each building is filled with interesting shops. My favorite was the Bon Bon Chocolate store in the Strand.

For dinner choose from two very different but adjoining areas. If you like Asian food, go to Chinatown. Sydney’s Chinatown is small compared to San Francisco or New York, yet it has every kind of Asian food. I saw Chinese, Japanese, Korean, Vietnamese, Thai, and Malaysian restaurants in the neighborhood clustered around Dixon Street. If you like seafood, go to Darling Harbour. The harbor front is a nice place to walk in the evening. It’s full of seafood restaurants and upscale wine bars. A nearby stretch of Liverpool Street is the home of a half dozen Spanish restaurants, if tapas and paella is more your style. Then go back your hotel and rest your aching feet.

Ride the cable car to the top of the hill to the Zoo’s entrance, and take your time walking downhill through all of the animal exhibits. The animals in most of the zoos I have been to are usually sleeping. Not at this zoo! There was a lot of activity. In one instance I saw a large, irate gorilla launch himself in a body slam against a Plexiglas wall right in front of a visitor. I was glad the Plexiglas was strong!

When back at Circular Quai, walk over to the Rocks. The Rocks is the oldest part of Sydney. Explore the narrow lanes and back alleys, and have dinner at a traditional Australian pub.

Day Three
If the weather is good, go to one of the nearby beach towns, either Manly or Bondi. For Manly, take a ferry from Circular Quai for the thirty minute ride across the scenic bay. For Bondi, a bus across the city will get you to the world famous Bondi Beach. Find a spot to soak up the sun and walk along the shoreline trails.

Day Four
On the last day, catch a tour to the Blue Mountains. This is a world heritage site about two hours west of Sydney. The tour I took was a full day affair that made several stops. First, after fighting our way through the horrendous Sydney traffic, we had tea and a snack in the picturesque mountain village of Leura. Then we rode the steepest railway in the world (a 52 degree incline) down to a forest walkway at Scenic World, followed by a ride back up in a cable car. After lunch at an eco-lodge, we visited Featherdale Wildlife Park for up close looks at koalas, kangaroos, wallabies, wombats, and other animals. The tour finished with a drive through the 2000 Olympic site and a cruise on the Parrametta River back to Sydney.