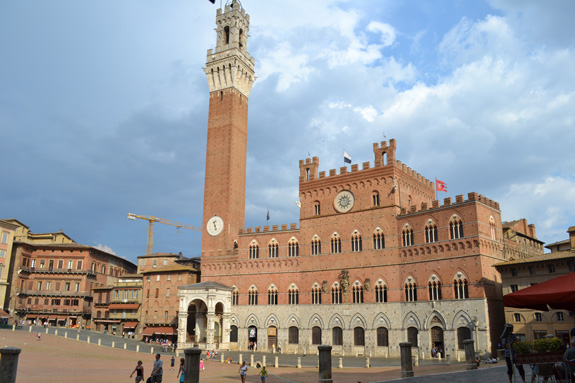 In the Middle Ages the people who lived in the countryside in central Italy were frequently threatened by neighboring city-states.  In response, instead of living in the valleys, the people built fortifications on the top of hills for safety.  These forts grew into towns.  Each town typically had high walls built into the top of the hill and a massive gate to protect the townspeople from attackers.  It was very difficult to attack uphill and scale such high walls.  The protection provided by the hill town allowed the people to prosper and develop their economies.

There are many hill towns to visit in Italy today.  Here are a few of them.

High above the valleys of Umbria is the tiny, picturesque hill town of Montone.  Little known outside of Umbria, Montone has few tourists.  As a result one can see how hill town residents live today without the crush of the tourist crowds. It is easy to walk around the town in fifteen minutes.  Get yourself a chocolate hazelnut gelato and relax in the small piazza and watch the old men outside the café argue about the politics of the day or their favorite football teams.

The drive from Calzolaro over the mountains to Cortona in Tuscany was treacherous.  The road was very windy, but with fantastic views of the Lago Trasemino, a large lake in Central Italy.  After an hour of white knuckle driving we got to Cortona.  It gets a lot of attention and many tourists because of the “Under the Tuscan Sun” book and movie (the film is a “chick-flick” bore to me…).

We walked around the old streets and shopped.  I didn’t think there was much to see in Cortona.  It didn’t have the charm of Montone.  We had dinner at a ristorante outside of the theater.  A car pulled up and parked outside the theater.  A very British-looking gentleman, expertly attired in a hounds tooth jacket and fancy cravat, got out of the car on the right side and went in for the concert.  At first I thought the car was an old Jaguar, but when I inspected it later I realized it was an Aston Martin DB5.  It was the same model and color of car that James Bond drove in the film “Goldfinger.”   I don’t know if this one had revolving license planes, a machine gun behind the grill, and an ejector seat.

Siena is my favorite hill town.  I believe it is the largest hill town in Italy.  In the Middle Ages it was a powerful and wealthy city-state.  Today it survives largely on the thousands of tourists flooding into the town every day and leaving every evening.  The main square, called the Campo, is the site of a famous horse race called the Palio.  The riders race their horses around the outside of the large square at breakneck speed.  The race is a competition between neighborhoods of the town.  Each neighborhood has a horse in the race and the jockey wears racing distinctive colors.  The neighborhoods are adorned with flags in their racing colors.  While we were there, the town was preparing for the second of two annual races, coming up in a few days.

I recommend stopping in at least one hill town, if possible, during any visit Italy.