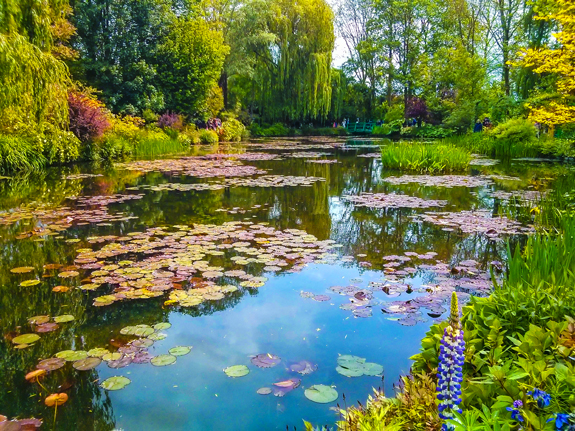 After my enlightening trip to the Pompidou Center to see modern art (as documented here), the next day I went to enlarge my knowledge of impressionism at the Musée de l’Orangerie.  The main exhibit at this Paris museum is a series of very large paintings by the master of French Impressionism, Claude Monet, called “Water Lilies” (Les Nymphiás).

“Both monumental and intimate, Water Lilies are the ultimate expression of Claude Monet’s artistic ideas, an incredible project by a painter who wanted to explore all the variations of light in his garden at Giverny.  The paintings are housed in two elliptical rooms, and encourage the visitor to gaze in endless contemplation. After the horror of the First World War, Monet wanted his work to take on this aesthetic and poetic dimension, and provide a haven for peaceful meditation.”

Well put, by some pompous art scholar.  Each of the two large elliptical rooms show four massive and colorful paintings of Monet’s pond.  When I was there it was uncrowded.  I almost had the rooms to myself.  This was surprising considering I was in the most touristy city on earth. The paintings demand your attention and reflection.  I was able to sit on a comfortable bench and I actually did gaze in meditative contemplation at the paintings.  It was peaceful but not quite endless, because after a while I had to go to the bathroom.

Monet lived for much of his life in the Norman countryside near a town called Giverny, about an hour’s drive outside of Paris. For the start of my road trip around France I decided to go see Monet’s pond and find out why he painted it so many times over the last twenty years of his life. Since it was late springtime the flowers were all in bloom when I got to Monet’s gardens. As I walked along the paths I couldn’t help but marvel at the beauty of this place and how my late mother would have enjoyed it. I could see why Monet liked it here.

I wandered up and down the paths dodging the hundreds of grade school children who threatened to knock me down and trample me like a multitude of ants.  Each child had a paper and a pencil.  They were on some sort of class field trip/treasure hunt. I crossed a road at the far edge of the garden by using a tunnel and came out onto a path in a bamboo forest.  The path led around Monet’s pond.  Yes, the pond was still full of water lilies.

By this time the sky had clouded over and it started to rain. As I walked around the pond the rain turned into a downpour. I bolted back into the tunnel to wait out the storm. When it started to let up I made a beeline for Monet’s house to dry out.

The house has been restored to how it was in Monet’s time there (from 1883 until his death in 1926). Monet was friends with many of the leading painters of the day, and he hung paintings by Renoir and other famous artists on his bedroom walls. I also noticed a Renoir in the hallway outside his room.

Could that be an original?