I’m an American. I like burgers. I like “French” fries. I am a connoisseur of both food items. You can travel all over the United States and find great burgers and fries in every city and state. Some people talk about Argentina steaks and Kobe beef, but in my opinion the USA is the only place for world class hamburgers.

I was on a spring break road trip to Florida with my friend Laurance. We had limited time to hit the beach so we were driving non-stop from Minneapolis, Minnesota to Clearwater Beach, Florida. Our mode of transportation was a 1973 Chevy Malibu. It had a big V-8 that got 12 miles per gallon. It was a dark green metallic color. We called it the Green Dinosaur. It should have been extinct.

We left on a Friday evening. We passed through Chicago late at night and were barreling down the freeway in the middle of Indiana as the night got so late it became early in the morning. It was the time when it’s tough to stay awake. It was 4 am.

I was driving. Laurance was in the passenger seat holding the boom box as he slept. We needed a boom box because the car radio didn’t work very well. We were playing Bruce Springsteen’s Nebraska album. That album doesn’t have much music to stay awake by. We were in the right lane, cruising along at 70 mph. There was no one else on the highway. Why would there be? Even truckers were asleep at rest stops.

I started thinking about girls in bikinis on the beach and started to drift. In more ways than one. My head lolled to the right side, my right arm sagged, and the car also drifted to the right side. I was dreaming of the Gulf surf when the sound of a machine gun blasted my brain. Why is someone shooting at me while I am lounging on the beach watching the girls walk by?

It wasn’t a machine gun, but the sound of the tires hitting the strip alongside the highway to wake up sleepy drivers who thought they could drive nonstop to Florida. As the car tilted towards the ditch, my brain became engaged with a sudden burst of adrenaline. Everything moved in slow motion in my mind. Laurance was awakened by the tilt towards the ditch as he crashed hard into the passenger door. He moved to punch me in the shoulder to wake me up. Simultaneously I grabbed the wheel and jerked it hard to the left to avoid the calamity of rolling the Green Dinosaur into the ditch and becoming a supernova fireball as I had seen in every cop show ever made. We careened across two lanes, right into the noise strips on the left side of the highway.

I knew they weren’t machine guns this time. I jerked the wheel back to the right before crashing into the median ditch. We finally straightened out as we flew down the road. It took an hour for my heart rate to calm down. 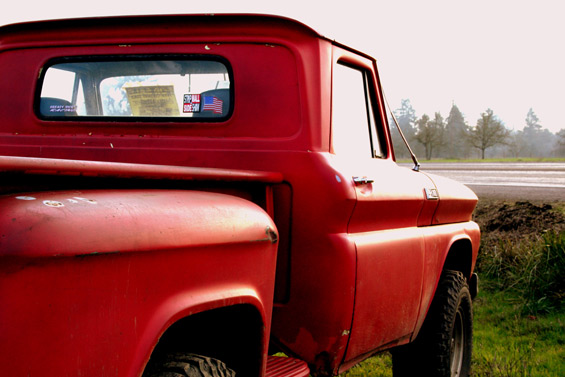 By 4am the next morning we were in Byron, Georgia. We were hungry so we stopped at a truck stop. Laurance insisted that we would find the best food wherever the most truckers were parked. On one side of the freeway was a modern looking restaurant with bright lights. There were a few trucks in the parking lot. On the other side of the freeway was an old diner. I think it was called The Road Kill Diner. The building was rundown and had a neon sign advertising a local cheap beer that blinked whenever it felt like it. There were a lot of trucks in the parking lot.

“That’s it!” said Laurance. “We have to go to that one. It will definitely have the best food.”

“But the other place looks so much nicer,” I pleaded.

“Come on, live a little. Let’s check it out.” said Laurance. “Do you see the big sign out front that advertises the Best Burgers in America, and below that one the sign for the Byron Special?”

“Yeah, but I’ve never heard of it. I’ve never been down South before.”

(Visiting the US from abroad? go to visum usa-ESTA for visa help)

We walked into the diner and stepped back in time. We were in the Redneck South. Confederate flags and opossum pelts were hanging on the wall. Framed black and white photos of KKK meetings were visible behind the bar. A jukebox was playing that Charlie Daniels song about the devil and the fiddle at an earsplitting volume. All of the tables were filled with middle aged white men with trucker hats, plaid shirts, dirty jeans and beer bellies. Every other trucker had a wad of chew in his mouth, even as he ate.

The only open seats in the joint were at the bar. A shriveled old waitress came to take our order.

We put in our order and I went to the rest room. Laurance stayed behind to observe. One of the truckers was sitting next to him. He was complaining bitterly to the waitress. He looked like a Yankee.

“I thought this place was supposed to have the best burgers in America? You should take down that sign. This thing is disgusting. The bun is old and moldy. The lettuce is wilted. The ketchup is rancid. The beef is gray and tough, with gristle in it. It has taken me three minutes to chew one bite. I wouldn’t feed this to my dog!  I want my money back before I throw up all over your counter.”

The ancient woman didn’t say a word to the man, but gave him his $4 back. The man grabbed his coat and left. As she walked past Laurance to the other end of the bar he heard her mutter under her breath.

“What do you expect when you order the Byron Special? We never said it was beef.”

I came back from the rest room feeling mildly refreshed and amused from reading redneck graffiti. Laurance was laughing so hard that he was in tears.

“What’s so funny at 4am in a truck stop in Byron, Georgia?” I asked.

Our food came. Laurance had a very nice looking plate of scrambled eggs, hash browns, sausage, and toast. He ate every bite and said it was delicious.

I had ordered the Byron Special.