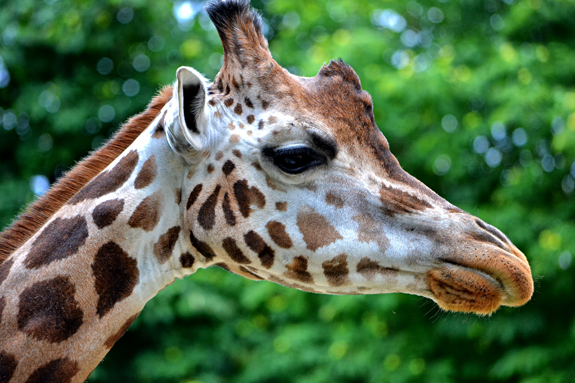 On my recent trip to Vienna, Austria I had the opportunity to visit the oldest zoo in the world. The Tiergarten Schönbrunn (the Schönbrunn Zoo) was founded in 1752 by orders of Holy Roman Emperor Francis I.  It was built near the Schloss Schönbrunn, the imperial palace of the Austro-Hungarian Empire. A smaller zoo had existed on the site since 1540.

The zoo was opened to the public in 1779 and admission was free. Today, it’s no longer free (what is these days?), but it makes for a nice and easy trip by train and tram from the center of Vienna.

When I got there on a muggy summer day it was threatening to rain. I was hoping to make my way through the exhibits before a thunderstorm rolled in.

When I got to the elephant’s enclosure, there were no elephants in sight. They were locked in their room while the zookeeper brought out bales of grass. I hung around for a few minutes until he was out of the area. Soon several elephants of all different sizes came lumbering quickly to get to the new grass.  It was snack time!

I spent quite a while watching these cheetah cubs. They were romping around the enclosure with each other, and one of them repeatedly jumped on his mother’s head.  She took it all in stride and ignored him.  Just another day with the kids.

The Schönbrunn Zoo is one of the better zoos I have visited.  The views were good and the distance to the animals was close. It’s certainly a good choice of an activity when visiting Vienna with children (how many old buildings and museums can they put up with?), and is even fun for us old-timers…

Check out these amazing Australian animals.