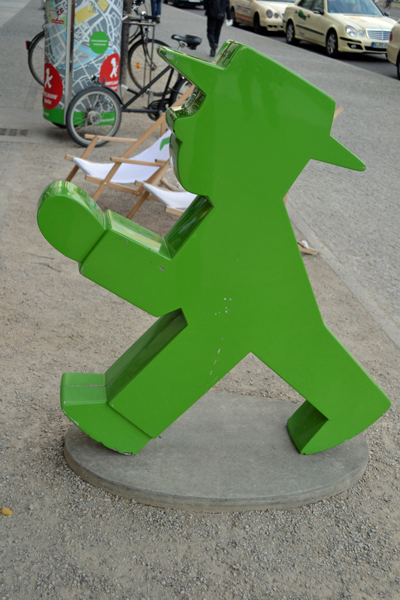 Almost all East Berliners follow the traffic rules as if discovery of any minor infraction would land them in the old Stasi secret police interrogation room. The Stasi must have had informers on every street corner, watching to see what happened at every change of the traffic lights.

“Do you know why you are here?” asked the Stasi interrogator. He was a grey-faced middle aged man with tiny eyeglasses. His fraying uniform was rumpled like he had slept in it. But he was still tired, and cranky. I don’t think he liked his job.

“No. I was near the Alexanderplatz.” I said. “Next thing I know I woke up here.”

I wanted to take the U-Bahn to the Museum of the Wall at Checkpoint Charlie. I was going to read about East Berliners attempting to escape the communist DDR. Some of them made it to the West; many of them were shot within feet of freedom.

I had been standing across Karl-Liebknecht-Strasse from the Alexanderplatz in the heart of East Berlin. I needed to cross the street. Since no cars were coming, I calmly strolled across the road to the other side. I had made a big mistake.

“Let me inform you of your recent subversive, anti-socialist activities. It has been reported by multiple sources that you disobeyed a direct order from the Ampelmann. The Ampelmann never told you to go, and you ignored him and went across the road anyway.” I could see the man was prepared to recite the relevant regulations if necessary.

“Uh, ok. Who is this Ampelmann? I never saw any police officers telling me what to do, or not do.” I pleaded ignorance.

“The Ampelmann is the organ of the state that prevents chaos on the roads. If you disobey the Ampelmann, it could lead to the complete unraveling of the socialist worker’s paradise that we have here. We can’t have that. Furthermore, you might get hit by a car and killed.”

From the back corners of my brain I started to grasp what he was talking about. I had noticed that at every intersection in East Berlin there were interesting lights for the crosswalk. Instead of a bland stick figure of a humanoid illuminated in green to indicate it was safe for pedestrians to cross the road, there was something else. Something with more style. The figure was confidently striding forward to a utopian future, or perhaps a bread line, bent slightly at the waist, arm extended. On top of his head was a snappy fedora at a jaunty angle. The Ampelmann!

“When the Ampelmann shows up in green, you may safely cross the road,” he continued. “When the red Amplemann has his feet together and his arms crossed, you must wait.”

Now I understood the programmed behavior of the Berliners. At every crosswalk, pedestrians wait like robots for the Ampelmann to tell them to go. They do not even think about crossing the road without the Ampelmann’s blessing. The Berliners do this even when the road to be crossed is a very minor side road, perhaps ten feet wide, and there are no cars in sight for kilometers and several minutes. They might even wait half an hour.

Once in a while some brave, independent, free-thinking and rebellious person (usually a young man with piercings and tattoos) ignores the Ampelmann and goes for it. He looks left, right, and then left again, and steps off the curb. The other pedestrians stare at him in shock and disgust, like he has taken the last piece of apfelstrudel at the family reunion. How dare he disobey the order of things! The Ampelmann must be followed at all costs. Our enlightened leaders have told us this for over forty years. What would happen if we thought for ourselves? Anarchy!

I felt something bump me from behind. It was a young woman carrying several packages from the Kausthof Galeria, the big department store next to the Alexanderplatz. She was smoking. Everyone smokes on the streets of Berlin. As she exhaled her toxic plume into my face as I turned around, she muttered something in German. Probably excuse me.

“Hey, watch where you are going,” I said.

She answered me in English. Everyone speaks English in Germany.

“I’m sorry. The light is green. Why are you still standing here?”

I must have drifted off while waiting for the light to turn. I know I had waited long enough. The crowd of shoppers surged forward around me like water in a stream. I was the rock stuck in place.

I didn’t know what to say, so I turned back, tilted my hat forward, and moved one foot in front of the other across the street. Ahead of me, the green Ampelmann was striding forward into the future, with one leg still in the past.

The Ampelmann has become a popular figure in post-unification Germany. There are Ampelmann shops selling all kinds of Ampelmann-branded products. This may be part of a nostalgia among some Germans for the old days of the DDR.