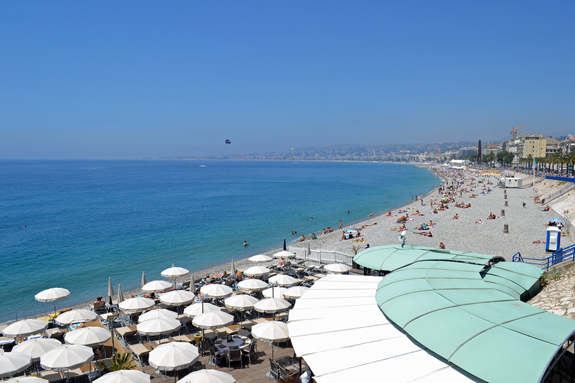 The French Riviera has always had an allure for me. I like French culture, outstanding geography, sunshine, beaches (even if some have pebbles), and the sea. It all comes together on the Cote d’Azur.

I also like movies and someday I would like to attend the Cannes Film Festival. On this trip I was in Antibes during the film fest.  Antibes is a small beach town a few kilometers down the coast road from Cannes. I wanted to pretend to be a paparazzi and try out my new telephoto zoom lens on some celebrities, but I had read that only officially recognized journalists and photographers were allowed into the tent areas where the stars come out to be seen.

The Cannes party scene is also legendary. The big name actors and actresses come to promote their latest movies (whether or not the films are in the festival). The movie studios throw elaborate parties full of the glitterati consuming champagne and caviar. Or so I’ve read in People magazine. I have never been invited.

So I avoided the crush of Cannes and stayed on the beach at Juan-les-Pins in Antibes. The Mediterranean Sea sparkled, the sun was warm, the beach sand was comfortable, a few sunbathers were topless…

There are two parts to the beach on the French Riviera – private and public. A private beach is typically in front of a beach café/restaurant/club. The private beach has muscular young men in polo shirts bringing expensive drinks to patrons while they recline on comfortable padded lounge chairs. For the privilege of such comfort and service the beachgoers pay 25 euros per day to sit on the chairs and use an umbrella. Signs around the private beach notify the riff-raff to stay out.

Since I am too cheap to pay 25 euros to sit on someone’s chair at the beach, I find a spot on the public beach, which in many cases is right next to the private beach. At the beach in Juan-les-Pins where I was, I laid out my towel on the sand just a few feet from the private beach rope.

A few days later I had an early flight to catch from the Nice airport. I was loaded with my backpack, rolling suitcase, and dastardly GPS unit. I was walking through the hotel lobby at 5am and noticed two guys in tuxedos sitting in the lobby.  They appeared to be professional photographers, with their big cameras on the table in front of them.  They were busily typing away on laptops, possibly uploading photos for their editors.

As I kept walking in my early morning haze while looking back at the photographers I almost walked right into two woman who were standing directly in my path. They were stunning models in evening dresses. They looked like the eye candy you see on the Oscars broadcasts, the women who politely usher the long-winded Hollywood stars off stage.  Brightly colored long dresses, 5 inch stiletto heels, big hair, painted faces, long legs.

“Excusez-moi,” I stammered, momentarily disconcerted by their surprise appearance.

I walked out the front doors of the hotel and saw two more exquisite supermodels in evening dresses sitting at a table by the front door.

What? Are you talking to me? I still wasn’t fully awake.   Was I dreaming? No, this is happening and she is talking to you. She’s asking you a question.

I kept walking without saying anything more. The two beauties smirked and giggled.  One of them called after me:

Yes, I am.  I would like to sit down and have a chat with both of you, I want to know which Cannes party you went to last night and why you didn’t invite me along to escort both of you, but I’m married and I have a plane to catch.  To America.