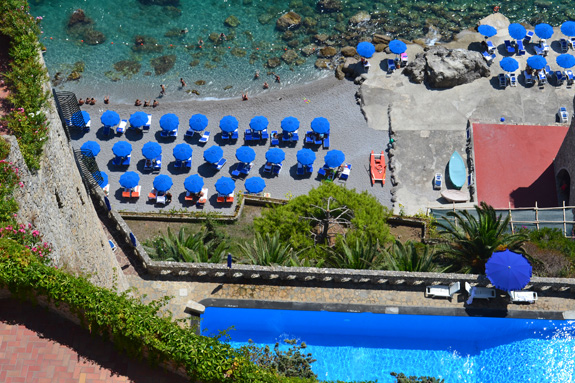 The huge bus sped towards the hairpin turn.  The driver tooted his horn as he started to make the turn.  He spun the wheel around and around.  He suddenly slammed on the brakes.  A car was coming from the opposite way.  The tiny car screeched to a stop before a devastating impact with the bus.  It was another close call.

The driver was muttering various Italian obscenities while gesturing with certain fingers.  The guide said that it’s a good thing we don’t speak Italian or we might be offended.

We couldn’t go forward until the tiny car backed up. The bus driver yelled out his window at the car and motioned with his hands.  By this time three more cars had caught up to the tiny car from behind.  The whole string had to back up about 20 yards so our bus could make the turn.

Welcome to driving the Amalfi coast road in Italy on a Sunday afternoon in August!  It was the busiest time of year.  Many families were here for their annual vacation at the coastal resorts to beat the heat and swim in the cool Mediterranean Sea.  The traffic was horrendous and the very windy road was built into the side of the mountainous coast.  I said every five minutes that I was glad I wasn’t driving.  Our bus driver was doing a masterful job.  Every hairpin turn was handled with finesse.

The scenery was beautiful.  It’s a cliché, I know, but in this case absolutely true.  At times I looked out the window straight down hundreds of feet to the sea.  The views of the yachts and pleasure boats out in the azure bays were entrancing.  Each sight of the small fishing villages, cliff side resorts, and the world famous town of Positano was worthy of a post card or a jigsaw puzzle.

In the town of Amalfi we walked around the port and the main shopping street.  Strolling the streets of an Italian coastal town while eating a gelato is a nice way to spend a sunny summer afternoon.  It was so hot that I wanted to be swimming in the sea.

Back in the bus, the driver was refreshed and ready to tackle the rest of the coastal road.  Soon we came to a tight pathway between the mountain on one side and a building on the other side.  Coming the other way this time was an enormous municipal bus.  Behind the municipal bus was a large line of traffic.  Behind us was another line of cars. No backing up this time!

The buses slowed to a crawl.  They were going to pass each other on the narrow road.  Inch by inch the vehicles moved forward.  The drivers looked at each other with a grin as they slid by.  They were so close they could have picked each other’s pockets.

At one point the giant buses were about six inches apart.  There was a slight bend in the road so the drivers needed to compensate for this fact or the buses were going to scrape each other for most of the length of each bus.

Each bus curved the exact amount needed to get by.  And on we went down the Amalfi coast road, until the next hairpin turn or tight spot, when the bus driver….