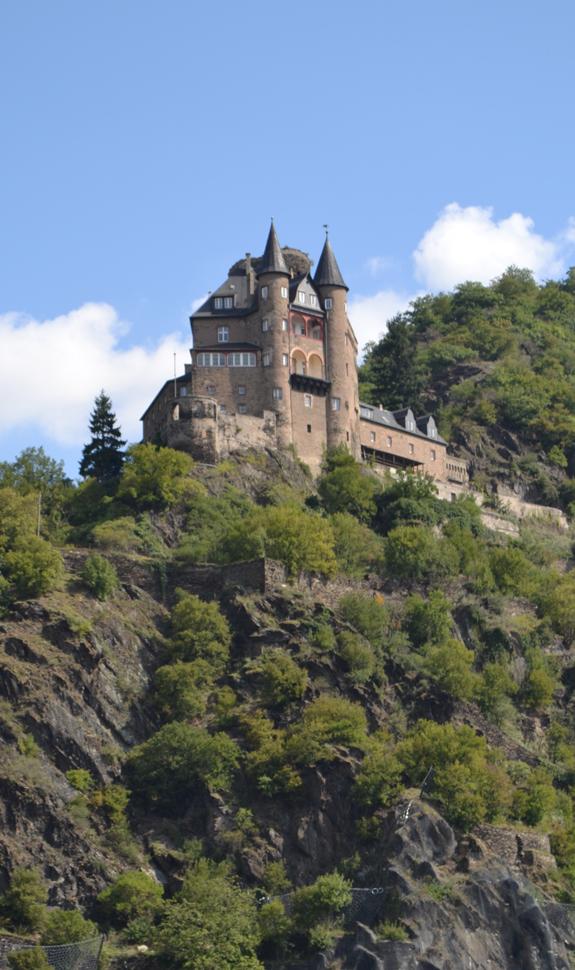 “Ow! That’s my foot!” I yelled.  The big SUV had rolled slowly forward.  I was standing outside the right rear passenger seat, reaching into my bag to grab some trash to throw away.  We had stopped at a gas station to get some gas and snacks.

The revolving tire pinned my foot to the ground for a second, then released it.  The big toe on my left foot started throbbing.

We had been having a great day touring the Rhine River Valley.  We were staying with friends outside of Düsseldorf, Germany.  Marc and his friend Christian were taking us down to the region south of Koblenz where the best part of the Rhine is.  Marc’s wife had to stay home to take care of their small children.

We barreled down the autobahn going 140 km/hr.  It was nice to relax in the backseat for a change instead of driving or navigating in a foreign country.  Having knowledgeable locals as our tour guides was a nice treat.  They had already looked up the necessary information for the day.  Our plan was to see the castles along the Rhine.

We went to a small town on the Rhine called St. Goar.  The Koln-Düsseldorf (K-D) river cruise line stops at several towns along the Rhine, but the part of the river between St. Goar and Bacharach has the best castles.  We got on the boat in St. Goar after leaving our car in a parking lot near the dock.  The boat was crowded with German retirees and a handful of American tourists.  It was a splendid late summer day, sunny and warm.

The boat was an old side-paddle wheeler built in 1907.  It had a full restaurant and bar inside, but we pushed our way through the crowd to get outside to the front of the boat.  The deck chairs in the bow would give us the best views of the castles built into the hillsides above the Rhine.

The castles were built in the 12th and 13th centuries by enterprising families who made their fortunes by controlling the river traffic on the Rhine.  They would stretch a chain across the river and stop boats trying to go past.  The river was the main transportation channel in the region and the boats carried all the goods of the medieval economy.  As the families grew richer from their toll booths, they built castles to live in and to protect themselves and their business interests.

Some of the castles are just ruins today, but many castles still look magnificent high on the bluffs above the river.  Cruising on a river boat is the best way to see these castles as the boat plows upriver.

We rode past Bacharach all the way up river to the town of Rudesheim.  In this town is a very old, narrow street called Drösselgasse.  This path has been filled with shops, restaurants, and beer gardens since the Middle Ages.  We walked up the hillside on the Drösselgasse and had an excellent late lunch in a rustic looking wine garden.

Burg Eltz was not built by the robber barons of the Rhine.  It was built by three rich families from 1472 to 1530.  The three families each had their own section of the castle grounds.  The castle thus belonged to a community of joint heirs.  An engraving of the Burg Eltz was on a Deutschemark bill in the pre-euro Federal Republic of Germany. Marc remembered looking at this bill as a child.  Marc and Christian had never seen the Burg Eltz castle so they were eager to tour it.

The castle stands in a wooded area on top of a small hill, a few kilometers from the nearest village.  Unfortunately it was closed by the time we got there.  We drove past an area where shuttle buses ferried tourists to the castle to an overlook.  We had a fine view of the castle from this hill, however parts of the castle were covered in scaffolding and a huge crane dominated the skyline.  Renovations were underway.

While I was peering at the castle in the distance, I noticed a man load two large dogs into a blue van inside the castle walls.  He opened a large wooden door that served as the main gate to the castle, drove the van through, and then closed and locked the door.  A few minutes later he re-appeared at the overlook.  He walked towards us yelling in a typically German way.  I guess we weren’t supposed to drive our car to the overlook.  Instead of arguing, we calmly walked back to our car, got in and drive away.  The man continued to turn red in the face and verbally blast us the whole time.  He needed to go somewhere and relax.  He was way too uptight. It’s not like we were planning to rob the place.  We were only looking at it from a distance.  Maybe he was the remaining descendant of the Kempenich family, whose part of the castle is not open to the public.

Being denied on our first attempt to tour the Burg Eltz, we tried to find a hotel to stay in for the night so that we could go back to the castle in the morning.  However, the Mosel River area is a very picturesque (and touristy) part of Germany.  It was a Saturday night on the last weekend of summer and every hotel we checked was full.  We decided to rocket back up the autobahn to home.

I’ve never been run over before.  I was lucky this time.  I pulled my sandal off to inspect it.  It looked OK.  I didn’t think it was broken.  Christian was very apologetic.

“Uh, no.  I am not going to the hospital. That is my worst nightmare.  Don’t worry about it.  Accidents happen.  I should have gotten in the car and stayed there.”

He went back into the gas station to get some ice.  They didn’t have any ice bags so he bought some popsicles.  I rode the rest of the way home with popsicles on my foot.  It was cold, but it kept the swelling down.

I even pulled one out of the pile and ate it.