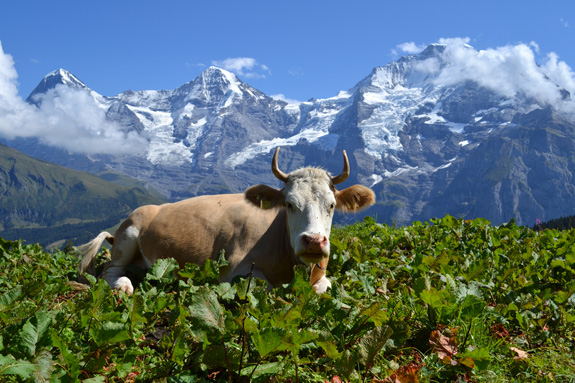 Mere words are not enough to describe the spectacular scenery of the Swiss Alps.

There is a place at the edge of the cliff near Mürren called the “Nose.”  BASE jumpers jump off the cliff, free fall 12 seconds, deploy their parachutes, and gently fly down to the floor of Lauterbrunnen Valley.  BASE stands for Buildings, Antennas, Spans (bridges), and Earth (cliffs), the four things on which these daredevils jump off. The BASE jumpers congregate at a local pub to tell the tales of their jumps and share videos they make from cameras mounted in their helmets.

From Mürren we took another cable car on a short ride to a tiny village called Allmendhubel (say that fast five times!) (1,907 m., 6,256 ft.).  This village is where the trailhead is for one of the best trails in Europe.  We hiked the Mountain View Trail from Allmendhubel back to Grutschalp.  It took about two hours.  The trail was relatively flat for most of the way.  The views were incredible.  The weather was perfect too, sunny, clear and about 70 degrees.

We could see the famous peaks of Eiger (3,970 m., 13,024 ft.), Mönch (4,107 m., 13,474 ft.), and Jungfrau (4,158 m., 13,641 ft.).  The Jungfrau is the highest mountain in Europe.  The Eiger has been featured in several movies.  One of them is the Eiger Sanction with Clint Eastwood (1975).  I watched a German film a few months ago called NordWand (North Face) (2008).  North Face is a suspenseful adventure film about a competition to climb the north face of the Eiger in the 1930s.  Climbers had made it to the top of Eiger first in 1858, but they had gone on an easier route on the south side.  Nobody had completed an ascent of the difficult north face, said to be the most difficult in Europe. After having seen and enjoyed the film, it was very interesting to see the Eiger in person.

While hiking the trail, we came across quite a few cows.  Every cow had a big bell around its neck.  The mountainside is normally very quiet and tranquil in summer.  Except for the tinkling of cows walking around!  They sound like a lot of wind chimes.  The Swiss make excellent cheese from these alpine cows.

By the time we made it back to the hotel, our hips, knees, and feet were sore.  However, it was worth it to spend an exceptional day to hike the Berner Oberland.