I started to think. Route 66, Route 66… that sounds familiar.  There must have been a movie or a TV show about it way back before I was born.  From the back corners of my brain’s database I recalled a vague phrase about getting your kicks on Route 66.  Yet I had to have an answer for my niece Dorota, who was visiting from Poland (she was our tour guide at the Polska Polka Party and in Krakow).

“I don’t know Dorota. I’m not sure where it is.  I think it goes through northern Arizona.  Perhaps on the drive to the Grand Canyon we’ll find it.”

“I work with a man at the bakery who is obsessed with Route 66,” she said.  “He reads about it all the time.  He collects things about Route 66 that he displays in the office.  I want to go there and bring him something from Route 66.”

Not to be outdone in the knowledge of Americana by a Polish bakery manager, I knew I had some research to do.

Route 66 is known as the Main Street of America.  It runs from Chicago to Los Angeles.  Established in 1926, it served as the main highway for the people who migrated west to California, especially those fleeing the Dust Bowl of the 1930s.  It was also a main vacation route for millions.  Route 66 was popularized by a hit song and a TV show in the 1960s.

The highway ran through many small towns across the west.  The travelers along the route provided economic vitality to these small towns.  In the 1950s and early 1960s, the towns were bypassed by the new Interstate Highway System.  Nobody had any reason to drive the route through the towns when the interstate was so much faster.  As a result, the towns of Route 66 faded away or were stuck in a time warp.

As I analyzed the map, I saw that Route 66 goes through the small town of Williams, Arizona.  Great!  We’re going to stay overnight in Williams.  We’ll have a look around and see what we can obtain for the European Route 66 fanatic.

When we got to Williams, we checked into our motel on the edge of town.  The motel was a little run down.  The TV in the lobby was tuned to the old western movie channel.  There were giant piles of snow still in the parking lot from the late winter snowstorm that hit a few days ago.  The desk clerk was asleep at the counter.  She was an old woman who looked like she had been there since the 1940s. It was that kind of town.

I rang the bell on the desk a few more times than was necessary.

“Can you check us in and give us a restaurant recommendation?  We’re starved.” I asked.

“No need to get uppity!” she said. “I’m right here and I can hear you. The best place to go is the diner down the street on the right hand side. You can’t miss it.”

“You’re on it,” she said, and promptly put her head back down on the counter and instantly fell asleep.

We drove down Main Street.  There were a few stores still in business, a gas station, and several decrepit motels serving the Grand Canyon tourists.  There was even the World Famous Sultana Bar!  I’d never heard of it, but then I am not very knowledgeable about cocktails.

It looked like any number of old west towns on a Friday night.  There was nothing to see and nothing to do.  Nobody was kicking anything.

And then on right was the diner, just like the old woman said.  Cruisers!  It was lit up in bright red neon and it had a 1956 Chevy sticking out of the roof of the restaurant like Godzilla had thrown it there once upon a time.  The décor was fantastic.  There were old gas pumps, advertising signs, posters, and car parts.  It was 1950s Americana, only it was too perfect, like a movie set designer had scoured the country for just the right things to set the mood.  I expected Fonzie to pop his head around the corner at any time and say “heyyyyyyyyyyyy!”

It would have been cool if the waiter matched the décor.  Instead he wore board shorts, skater shoes and his arms were covered with tattoos.  Apparently he didn’t get the memo about the ’50s diner theme.

The food was mediocre, the service was slow, and they didn’t even play ’50s rock and roll over the sound system.  Lady Gaga in a ’50s diner doesn’t cut it. However, they had the mother of all Route 66 souvenir shops in the adjoining store.

“Hey Dorota! They have everything you could possibly want to buy for your co-worker that has Route 66 on it.”

Shirts, hats, mugs, shot glasses, cards, posters, signs, ashtrays, you name it, they had it.  The store was packed full of Route 66 memorabilia.  Unfortunately, everything was made in China and was probably manufactured in the past few months.  I imagined a factory town somewhere in the Chinese interior with many large factories churning out all of this stuff.  I think the Chinese workers have no idea what Route 66 is, nor do they care.

After scouring the store she eventually bought a Route 66 placemat for the Polish bakery manager to add to his collection.  The placemat showed the route across the American West.  Williams, Arizona was not on it.

I learned that there are not many kicks left to be had on old Route 66.  It’s all gone now.  The only thing left are faux 50s diners and tacky gift shops.  But at least we found out where Elvis has been hiding all these years. 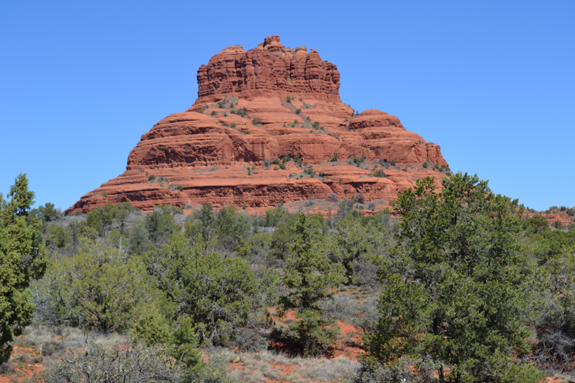 I had wandered into a small outdoor shopping mall in the town of Sedona, Arizona. In between the chocolate store and the Western art gallery was a souvenir shop.  The shop was brightly lit and had several crystals hanging in the window, sending the rainbow pattern dancing in the ether.

I was outside looking in.  I wanted to know more about my aura and see it too, if possible. Did I have an aura?  Nobody has told me about seeing my aura before.  Do I have a nice looking aura?  Does it look like a halo?  Or devil’s horns if I’ve done something bad that day?  Does it go through your clothes or does it get stopped?  I imagined that if you’re at the beach in your swimsuit then your aura must be shining at full strength. What if you’re snowmobiling and you’re wearing long underwear, a snowmobile suit, and a helmet?

The door banged shut as I entered and rang a little bell near the counter.  An attractive woman emerged from behind a curtain.  She was in her late 30s, with deeply bronzed Arizona tan, spiky hair, and mysterious tattoos running up one arm.  She had a Kokopelli medallion around her neck.  A small crystal pyramid was on the counter, next to a newspaper turned to the horoscope section.

“Good afternoon!  Welcome to the New Age Nirvana gift shop,” she said cheerfully. “How can I help you?”

I thought briefly about seeing if she could take care of my impending income tax bill with Uncle Sam, or mentioning that her karma had run over my dogma, but thought better of it.

“I saw your sign in the front window about seeing my aura.  I’ve never seen mine before.  I’m curious.”

“Everyone has an aura displayed to those around them,” she replied. “Your aura affects those around you, especially your soul mate.  However, the aura is present only in the fifth dimension.  Some people who are completely in tune with the forces of Mother Earth can see it in others.  Most people need special equipment to detect it.”

“Can you see auras without the special equipment?  Can you see my aura now?” I asked.

“Not right now.  I can see auras only when I am practicing a certain secret yoga position and smoking peyote.”

She led me to the back of the store into a small, very dark room.  She had me stand with my back to the wall and then she disappeared.  A few seconds later I heard her voice behind me, coming through an opening in the wall near my head.

“I am now going to show you your aura,” she whispered.  “Please look straight ahead.”

Colorful shapes appeared out of the darkness.  All of the colors of the rainbow were flowing outward from a humanoid shape a few feet in front of me.  As I moved my head and arms, the rainbow colors moved with me.  It was magical.

I’d had enough.  I quickly crossed the small room and groped along the wall.  I flipped the light switch to find that the room contained a large flat screen TV mounted on the wall opposite from where I had been standing.  There was a webcam mounted above the TV.  A cable ran from the TV along the floor and disappeared into a hole in the wall to the room behind this one.

The woman burst into the room.

“What are you doing!” she cried. “You’re destroying your aura!”

“I’m an investigative reporter on a joint assignment from Penn & Teller’s TV show, the Skeptics Society, and the Onion,” I lied.  “You’re busted!  Your special equipment is nothing but a webcam, a TV, and a computer with a gesture recognition program.”

She scowled and kicked me out of her store.  I couldn’t even buy a local map with directions to the best vortex.