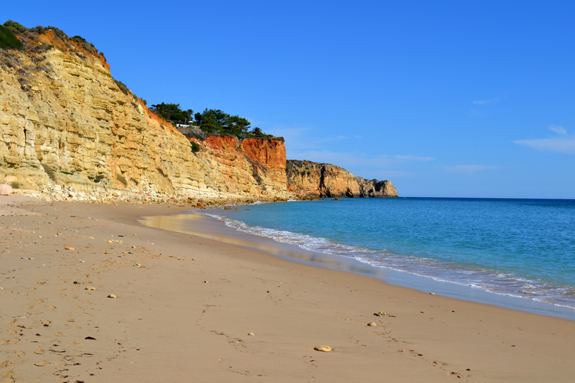 It was a strange feeling to wander the empty halls of the large resort.  I was used to big city crowds, being packed into U-bahn cars like sardines, and waiting my turn for things.  Here I was the king of the castle.  I was the only guest at my very own private hotel.  Had I turned into Howard Hughes? I better check my fingernails…

I had been in Berlin trying to decide where to go next.  It was the nearly the end of September.  Going north to Scandinavia meant colder weather and dark skies.  It was too early to head for London. I had never been to Portugal before. I thought it must still be sunny and warm there.  I picked the town of Lagos in the Algarve region of southern Portugal on the map at random.  I searched a travel web site for a Lagos resort with an available room and free wi-fi.  Near the top of the search results was the Belmar Spa and Beach Resort.  No reviews, a blank slate.  I’ll be adventurous and give it a try. (For Mediterranean resort information, see Club Med all inclusive vacations)

When I arrived at the front desk around 10pm the clerk was sleeping.  There was a golf tournament being shown on the nearby television so maybe that explained her stupor.  The bar in the lobby was deserted except for a lone bartender polishing glasses and staring forlornly at the Atlantic Ocean.  There were no other guests coming or going.  Maybe it’s an older crowd here, where they go to bed by 10pm instead of partying until 4am.  That’s ok with me, at least it won’t be noisy when I’m trying to sleep.

The next morning I awoke to the sounds of the pool guy cleaning the pool deck.  In the bright sunshine I could see that I had been assigned a nice apartment with a tremendous view of the enormous pool and the ocean beyond.  Southern Portugal looks like Southern California, but without the smog, traffic, or billboards for lap band surgery.

I headed over to the restaurant around the corner from the lobby bar.  A waiter stood by the counter checking the polish on her nails.

“Good morning,” I said.  “Is the restaurant open?”

I surveyed the room.  It was completely empty of guests.  I had my pick of the tables.  The one in the middle with the excellent view will do nicely.  I wondered if the crowd here was also a late sleeping crowd.  Where were the guests who couldn’t function without their morning coffee?

After eating some eggs I approached the counter.  I was still in Europe where the waiter never seems to come back to the table after the food is delivered.  After a minute the waiter reappeared through the kitchen door.

She searched her computer list for my name and room number.  It was a very small list.

I went to the pool.  Or should I say I tried to go to the pool.  The resort had several pools.  The largest pool was right below my second floor balcony.  I could see the pool and perhaps even spit into the pool, but I couldn’t actually get to the pool.  I don’t know much about Portuguese architects, but if I am ever in the market for one I will import an architect from somewhere else.

I went downstairs and headed for where I thought the pool was.  At the end of a corridor I came to a junction with three unmarked doors.  One went to the parking garage.  One went to a storage room.  Ahhhh!  It must be door number three.  Nope, that one went to where they stored the garbage.  I backtracked to the front desk.

“Excuse me.  How do I get to the pool?” I asked politely.

“Do you mean the big outdoor pool between buildings C and D?”

My eyes had glazed over during the monologue.  I mumbled something incomprehensible and walked down the stairs.  As I wandered the halls I noticed that most of the doors had no signs.  A few doors had paper signs taped to the wall with something written in Portuguese.   They were not very helpful to me.  Could it be that the resort was so new they hadn’t put up any signs yet?  Without good signage, guests navigating this floor layout could get lost for decades.

After multiple mistakes through private spa rooms, the manager’s office, and the empty women’s changing room, I finally made it to the pool deck.

When I was on a cruise ship, lounge chairs were a valuable commodity.  People would get up early, sprint up to the pool deck, and reserve their favorite chair.  (For my typical response, see The World’s People on a Cruise Ship).  In the Belmar Spa and Resort, there was no need for such tactics.  There were no people by the pool.  Hhhmm, I must be early.  Maybe the other guests are playing shuffleboard somewhere or attending a needlepoint class.  I picked a chair with a good angle to the sun and stretched out.

By lunch time no one had joined me at the pool.  I had an eerie feeling as I worked my way through the maze back to my room.  What if I had entered an old Twilight Zone episode where the housemaids killed the guests and the cook made stew with the remains?  What if the previous guests had gotten the bubonic plague and the Portuguese authorities covered up the outbreak to protect the Algarve tourist industry?

I went back to the restaurant.  It was still empty.  The bored waitress was standing in the same spot as before.  Sit anywhere you like she said.  Right.  I can do that because nobody else is here…  This didn’t mean I got my lunch any sooner by the way.

After lunch she asked me what room I was in for the bill.  The same room I was in four hours ago…. C1G.  It’s not like she had looked up any other rooms in her list that day.

By mid-afternoon I decided that being the only guest was a good thing.  Maybe this is how Bill Gates or Warren Buffett lives when they go on vacation.  Do they buy out a whole resort for security and privacy?

In the next few days a handful of guests arrived.  I saw them in the lobby once in a while. However, the feeling of solitude remained.  I still had the restaurant and the pool to myself.  The waitress learned my name and room number.  The pool guy sprayed the pool deck and the maids mopped my tile floor everyday whether they needed to or not.

Soon enough it was time to go back to the real world.  Wait in line, take turns, and fight traffic.  To live the way everyone else lives.