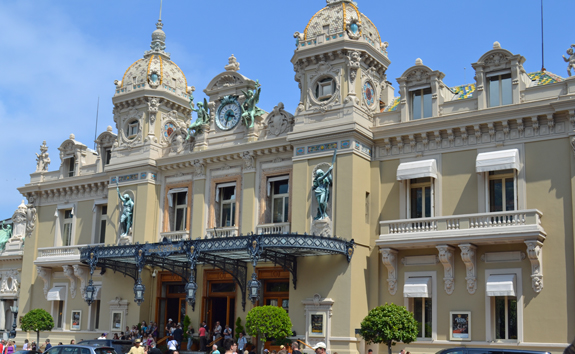 In typical French waiter fashion I pretended that I didn’t hear or see the doorman as I confidently strode across the grand lobby of the Hotel de Paris. Are you talking to me?  Do you know who I am? You are a lowly doorman, and I might be an aging rock star, a billionaire business mogul, or an undercover secret agent. You should allow me to stroll anywhere I want in Monte Carlo, Monaco.

Unfortunately, I am none of the above.  I am merely an ordinary traveler in need of some, uh, facilities.  When walking around major cities of the world it is often difficult to find a place to answer nature’s call. One technique I use is to go into the lobby of a nice hotel like I belong there.  Indeed like I own the place. It has worked in Milan and many other places.  It wasn’t working here.  Perhaps my appearance gave away my status.

He caught me halfway across the huge, ornate room.

“Monsieur, can I help you? Are you checking in?” he said politely in English.

“Are you staying in the hotel?” he asked next.

I thought about saying yes, that I was merely going up to my room to get something I had forgotten.  Then he would ask to see my room key and the game would be up.

“Then you will have to leave.  It is my job to see that only guests are allowed in. Not tourists.”

I admitted defeat and made a U-turn back across the lobby.  He followed me to the door to ensure my departure from the premises.

I went next door to the famous Monte Carlo casino. I pictured myself as Bond, James Bond, dressed in an exquisite tuxedo and ready to play baccarat or chemin de fer in the presence of beautiful women who will oohh and aahh at my every move.  I will beat the evil Soviet agent at the last minute and buy drinks for everyone there with the winnings.  If I can figure out the difference between baccarat and chemin de fer.

I pulled open the massive front door and went inside.  I ran straight into the casino doorman.

“Excusez-moi, Monsieur.  You can’t come in with that” he said as he pointed to my large tourist camera hanging around my neck.  “No photographs allowed in the casino. You can leave it there.”  He pointed to the coat check room on the other side of the lobby.  There was a long line of tourists checking in their cameras and backpacks.

I gave up. I left the casino and wandered Monte Carlo for hours in search of a rest room.

I found that Monte Carlo is not a good place to walk around.  It is the newer part of Monaco.  The old town of Monaco is up on a hill with a view of the sea, the Prince’s palace, the port with the fantastic mega-yachts, and the oceanographic museum.  It is a wonderful place to stroll away an afternoon.  In contrast, Monte Carlo looks like the west side of Los Angeles – all high rises, highways, and bridges.  Walking in Monte Carlo is just as bad as walking in L.A.

It is, however, the world’s best place to be a parking lot valet.  Every day you get to drive exotic cars and pretend that you own them.  See the excellent French movie The Valet to see what I mean.

After walking through condo tower canyons until my feet hurt I tried to find a restaurant for an early dinner. I had picked up a pamphlet in the mall listing the restaurants in Monte Carlo. There were 39 five star fine dining establishments and a McDonalds.

Still hungry, I went to Larvotto Beach on Avenue Princess Grace. I found a somewhat grungy café overlooking the beach and enjoyed the view.  There were several smaller yachts anchored out in the bay.  Young adults were playing volleyball in bikinis and speedos.  Children were digging in the sand.  An impossibly tall and slender woman walked by pushing a Gucci baby stroller.

After going bug-eyed at the expensive prices on the menu, I ordered some simple Italian food from Luigi.  The spaghetti was tasteless and rubbery.  The bread was from yesterday.  Even the Coke was flat.

One of the reasons Monte Carlo was on the agenda for the day was because there was a small jazz festival being held at a jazz bar called La Note Bleue on Larvotto Beach.  I didn’t know of the recording artist who was scheduled to play, but it sounded like a fun evening.

I got to the bar while the band was just starting to play.  A jazz guitarist was jamming away, while his backup band held the groove.  I found a seat on a comfy couch while the sun was setting.  It was a glorious late spring night.  This is nice, I thought.

After only twenty minutes the guitarist announced that their early set was over and that they were taking a break.  They wouldn’t play again for two hours.

As I left the bar I saw the band eating their free dinner.  They each had huge hamburgers with a plate full of fries.  It looked way better than what I had eaten.  Now I know where to go next time I’m in Monaco (if there is a next time). Even the bathroom was available.