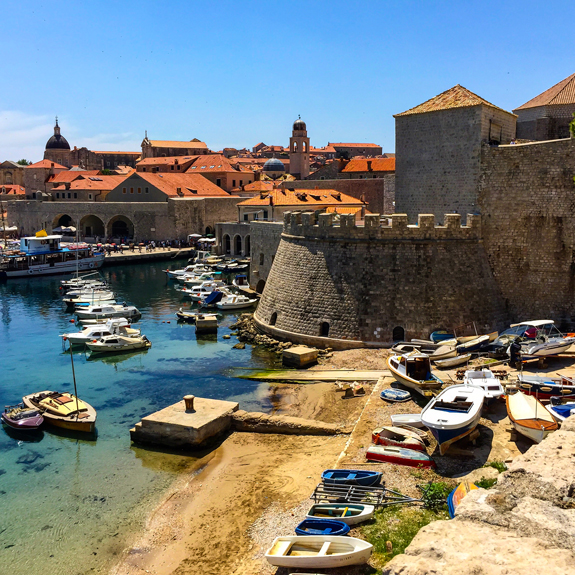 Unlike many places in the Mediterranean and the Adriatic, you can actually find a sandy beach in Dubrovnik. I don’t know if it was trucked in from somewhere else, or it if was naturally occurring. I don’t really care. I just want to sink my toes into sand when I’m at the beach.

Europeans must have tougher bodies, and especially tougher feet, than I do. Most beaches on the Mediterranean and Adriatic are made up of pebbles instead of sand. Sometimes the rocks are rough like gravel. The pebbles can be the size of peas or even as large as golf balls. The beach in Nice, for example, has stones the size of lemons, but at least they are smooth.  The beach goers stretch out their towels and lay down on the rocks and pretend it’s comfortable. Seems more like a form of torture to me.

The coast in Croatia is beautiful. I only got to Dubrovnik and didn’t have to time to venture farther up the Dalmatian coast, or to go out to one of the many Croatian islands in the Adriatic Sea. The weather was perfect for lounging at the beach and swimming in the clear, cool water of the sea.

Fortunately for my feet, I found that the closest beach to the Old Town, called Banje Beach, was sandy. It was an easy 10 minute walk outside the Port Gate of the Old Town. The view of the Old Town from the beach is fantastic.

I found a sandy spot on which to relax, however, the edge of the water was a small wall of pebbles…

Dubrovnik has existed for more than 1,000 years. The defining feature of the Old Town are the city walls that encircle the town. Some parts of the wall are twenty feet thick. There are only two gates in the wall. Some buildings in the town date from the 1300s. The town was bombed by the Serbs during a siege in the Yugoslav war in 1991, damaging more than half of the buildings and killing over 100 residents. I don’t remember hearing about that in the US news at the time.  In the late 1990s, the city repaired the damage caused by the Serb artillery shelling.

Dubrovnik is very popular right now due to the hit TV show “Game of Thrones.” The Old Town is used to represent the fictional city of King’s Landing in the show. Walking tours of the old town that visit filming sites are big attractions for the tourists.

I liked walking around the Old Town, but it was so clean and perfect looking that I thought I had wandered into Disneyland or a movie set. Thousands of tourists (many of them from cruise ships) pour into the town every day. The main street becomes very crowded. It’s better to stroll along the backstreets in the evening.

Dubrovnik, one of the best preserved medieval walled cities in the world, should be on your travel bucket list.