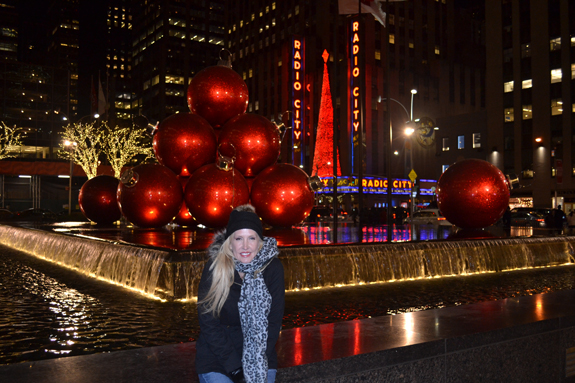 Exploring New York City at Christmastime is a dream for many travelers. This year I finally made it to the Big Apple to experience all that the holiday season has to offer. Here are my top 5 things to do while rocking around NYC during the most wonderful time of the year.

The famous Rockettes have been around since 1925, and have appeared at Radio City Music Hall since 1932. Luckily, it’s not the same set of women who are doing those fantastic high kicks! The Rockettes anchor the Christmas Spectacular with their synchronized dancing and I couldn’t help wondering when they danced in a long line why they were all the same height. Did they only let women join the group who were exactly 5 feet 9 inches tall? The show also features a medley of Christmas songs, a live orchestra, a 3D appearance by Santa and his reindeer, and amazing video effects throughout the theater. The show was fast paced and very entertaining.

The Giant Christmas Tree and Skating at Rockefeller Center
The Christmas tree display is at Rockefeller Plaza, between West 48th and 51st Streets and Fifth and Sixth Avenue. I walked past the tree several times while in New York and every time it was mobbed by tourists taking selfies. Upwards of half a million people pass by the tree very day. That’s a lot of holiday shoppers. This year the Christmas tree is 75 feet tall. I wouldn’t want to be the person who had to put the star on top of it.

The Rink at Rockefeller Center is an iconic attraction in NYC around Christmastime. I had big plans to show off my triple axel skills on the ice, but due to the cold weather and the long lines I decided to save myself the embarrassment of repeatedly falling on my butt in front of people from all over the country. Yes, I grew in the frozen northland of Minnesota, but I don’t really know how to skate…

City Views from One of the Skyscrapers

No trip to New York City is complete without at least one outing to a skyscraper’s observation deck to see the city from above.  Thirty years ago I visited the Twin Towers of the World Trade Center several times. On this trip back to New York I definitely wanted to see the new World Trade Center complex that was rebuilt after the 911 terror attacks. The observatory at the new One World Trace Center (at 285 Fulton Street) is on the 101st floor and provides incredible views of the surrounding area. During Christmastime the observatory hosts a Winter Onederland (That’s pronounced like Wonderland, not Oh-knee-der-land), complete with Ollie the snow owl, a glacier cave, and Santa’s Village.

Unfortunately, the day I went to the observatory the sky was overcast and then it started snowing, so photographs of the day are somewhat dreary. I also didn’t get to tell Santa what I wanted for Christmas, since I heard he called in sick because of a spiked eggnog hangover.

If you don’t want to go downtown, other sky high vantage points are in Midtown at the Empire State Building’s 102nd floor observatory (on Fifth Avenue between East 33rd Street and East 34th Street) and the Top of the Rock observation deck in Rockefeller Center.

It may be cold out, but taking a river cruise on the Hudson and East Rivers is a great way to see the city lights from sea level. Most of the time you can sit inside by the heater and have a drink, but occasionally you should venture out to the bow of the ship to brave the wind chill for the perfect photo op. Classic Harbor Line at Pier 62 in Chelsea, Eleventh Avenue and West 23rd Street) has happy hour cruises that are a good way to kick off your night on the town.

Honorable mention: For a nice break while walking around Greenwich Village, get a scrumptious cookie and a hot chocolate or a latte at the Milk and Cookies Bakery at 19 Commerce Street. This tiny place was inundated with Girl Scouts when I arrived. After answering their survey questions about my preferences in cookies, they cleared out and I could finally get to the counter. I had difficulty choosing from among the decadent desserts, but eventually went into a chocolate chip cookie coma…

For more great tips on the best of NYC, see Best Things to do in New York