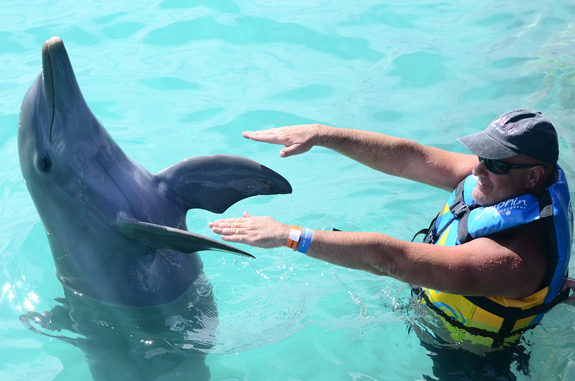 Aischa popped out of the water and thrust her snout up to my cheek. She wanted a kiss. She held herself still in that position until I obliged by putting my lips on her face. Now happy, she tilted her head up and then slid down into the water and swam away.

I had never thought about interacting with a dolphin before; I thought that was something that would be more interesting for kids. However, on a recent cruise I signed up for a dolphin encounter excursion. I assumed it would be little more than a short photo opportunity in a big swimming pool where a dolphin would be confined like in an aquatic zoo. I was wrong. It turned out to be one of the highlights of my trip.

The cruise ship stopped in St. Maarten and from there I sailed for an hour over to the neighboring island of Anguilla. After a short bus ride, I arrived at the Dolphin Discovery facility. These bottlenose dolphins live not in an artificial environment (e.g., a swimming pool) like at Sea World, but in a large fenced in area of the ocean. I walked on a long boardwalk out to the man-made lagoon and got in the water.

Scientists think that dolphins are one of the most intelligent animals on the planet. They’re highly social animals, living in groups (called pods) of up to a dozen members. They establish strong social bonds; they will stay with injured or ill pod members, even helping them breathe by bringing them to the surface to breathe if needed; and they have been known to protect swimmers from sharks. They are great communicators – by clicks, whistles, and other vocalizations, and by non-audible touch and posturing movements.

My guide’s name was Jose, and he was working with a young female dolphin named Aischa. Jose was a new trainer and he was still building up a rapport with the rambunctious teenager. Aischa had learned her dolphin encounter behaviors, but she sometimes disobeyed Jose and swam away to the other side of the lagoon to be with her boyfriend. Sounds just like a human being, doesn’t it?

The dolphins at this facility were trained for at least four behaviors when interacting with guests.

The first behavior is the kiss. Jose instructed me to hold my hands together in a cupped fashion, extending my arms out in front of me. Jose blew his whistle and in response Aischa swam up to me and held her position with her head out of the water until I smooched her.

Next, I held my hands up high above my head. Aischa came out of the water vertically and, while balancing on her tail, waved her flippers at me. She seemed to be smiling and laughing at me as she nodded her head in unison with the flipper movements. It was so charming…

For the next two behaviors I swam out into the lagoon. As instructed, I floated with my feet down in the water and held out my right arm while I put my left arm across my chest. On Jose’s command, Aischa swam in a circle around me until she approached me from behind. Right before she bumped into me, she flipped over onto her back and extended her flippers to either side. I grabbed on to the base of each flipper with my hands and away we went! She gave me a fast ride for about 10 yards until she started to turn back to her stomach and I let go. It was exhilarating to feel the strength of the animal as it powered through the water pulling my extra weight.

Finally, I floated with the upper half of my body on a boogie board. I straightened my legs, pointed my toes down and stayed motionless. Aischa swam around me in a circle again and approached me from behind. She pushed her snout into the sole of one of my feet and pushed hard. I shot forward like a cannon ball! She propelled me across the water for about 10 yards and then let go.

It is amazing to me that these animals like humans enough to cooperate with these behaviors. Of course, the sushi they get from the trainers as rewards help to persuade them.