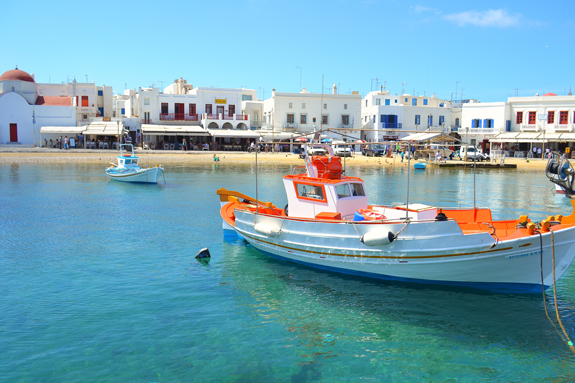 As Forrest Gump once said, hotels are like a box of chocolates. When you pick one, you never know what you’re going to get. Or something like that….

My stay in Mykonos turned out to be wonderful, in large part because of the hotel that I stayed in and the people who ran it. I usually check Trip Advisor for the reviews of places before I make a reservation. Often the reviews are accurate and useful, but sometimes the reviews are faked. Your mileage may vary.

The reviews for Villa Margarita on the island of Mykonos in Greece were glowing. Every review mentioned the hotel manager named Nikos and how friendly and helpful he was. I was thinking, OK, the guy is probably friendly and helpful, but that’s his job isn’t it? I guess he could be surly and rude like some French waiters, but that would be bad for business. In these days of the Internet, such behavior would quickly be noted in the hotel’s ratings and his reservations would probably take a nose dive.

I got off the ferry from Athens and Nikos was at the port to meet me and give me a ride to the hotel. As we drove above the old town of Mykonos he told me some interesting facts about the island and things to do. His hotel was just outside of town, overlooking the famous windmills of Mykonos.

Although Nikos was originally from Athens, his grandfather lived on the island and he would spend his summers here. He said that his mother had started the small hotel 25 years ago. This was his seventh summer season back on the island to run the hotel for his aging mother. His younger brother Alex was a new addition to the team for this summer.

When checking in, Nikos and Alex quickly learned our names (my daughter was traveling with me) and every time I saw one of them they would greet me with a smile:

“Hello Steve! How are you today?”

I soon felt like they were my new friends instead of some workers at a hotel. It was refreshing to be treated that way instead of just as a customer or tourist who is here today and gone tomorrow.

Every morning I would walk the few yards from my bungalow room to the office.

“Good morning, Nikos. Could I get a cappuccino?” I would ask.

“Of course, Steve! In two minutes Alex will bring you one.” Nikos would cheerfully reply.

Nikos and Alex lived with their mother (who I never saw) on the upper level of my bungalow. They had a little white dog who would come visit me every morning as I sat on my terrace overlooking the windmills of Mykonos, enjoying my cappuccino.

“Nikos, what’s the dog’s name?” I asked one morning.

“Boobies” he replied, laughing as he did so.

“You named your dog Boobies?” I asked.

He explained that the dog was actually his mother’s dog, and that in Greek the term describes what we would call a “momma’s boy.” The dog was very attached to his mother so that’s what she called him.

My daughter’s 24th birthday occurred while we stayed at Villa Margarita. Understandably, she wanted to go out and celebrate in the wild party town of Mykonos, instead of spend a quiet night in the bungalow with her co-traveler, the old man. In Mykonos, things don’t start hopping until at least 11:30pm, and the night clubs and beach clubs with their famous DJs stay open all night.  The cool crowd doesn’t even show up until at least 2am. Or so I have been told. I wouldn’t know personally, since I have a hard time staying awake past 11pm.

Nikos told her that he would take her out, or if he couldn’t, Alex would. When Alex took the job at the hotel for the summer, I’m not sure he knew what he was getting into. Nikos had to stay at the hotel (he often worked all day, every day during the summer season) so Alex got date duty.

The next night was our last one at the hotel. As we came back from the beach we saw Nikos at the front desk.

“Hi Steve and Allison!” he called out.  He asked about our dinner plans for the night and gave us some recommendations. He then said that he was planning on taking a rare few hours off to go out with a friend that night, and would we like to join them?

I didn’t want to impose, knowing that he worked so hard all the time, but it seemed impolite to decline his offer. We agreed to meet him and his friend at one of the best restaurants in town later in the evening.

As we approached this swanky seafood restaurant overlooking the harbor in Mykonos town I was glad that I had stopped at the ATM machine beforehand. It was that kind of place. A stunning tall blonde hostess greeted us at the entrance. 1980s pop songs pulsed from the bar. The ambiance was Euro hip and the view across the harbor was magnificent.

Nikos was there with his friend Fania. She was the manager at another hotel close to Nikos’ hotel, also working nonstop and on call 24/7 for the summer. I thought maybe she was his girlfriend, but wasn’t sure and didn’t want to pry. We had an excellent dinner and great conversation. We talked about their careers in the hotel management industry, the state of Greece’s economy, and what they liked to do for fun in their precious free time.

It was a nice night out with a local couple.  So unexpected. He didn’t have to invite us, but that’s the kind of person he is.

And that’s how you run a most excellent small hotel in Mykonos.