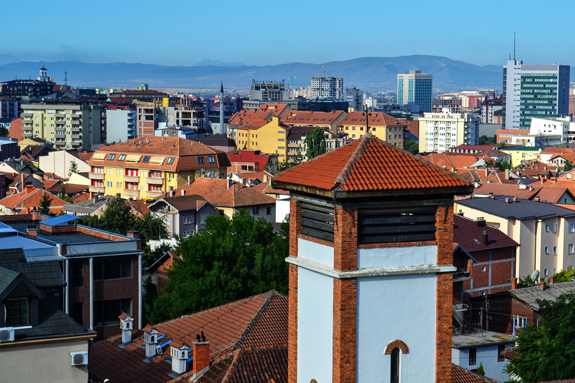 “Do you want to go to Kosovo?” asked my wife.

Kosovo, hhmmm, where is that?  I vaguely recall some trouble there back in the 1990s. Something to do with the break up and civil wars in Yugoslavia. I think it’s in the Balkans. I’ve never been to the Balkans before. Sounds interesting; let’s do it.

Our purpose in going to Kosovo was to help lead a week long English-language camp for university students. On our way to and from the camp, which was to be held in Kosovo’s Rugova Mountains, we were going to stay in the small capital city of Pristina (only 200,000 residents) for a few days.

After arriving at the new international airport (funded by the EU), we hopped into a taxi for the ten mile ride into the Pristina city center. One thing was clear right away. Most Kosovars love Americans! (This was refreshing to me, after having spent some time in France earlier this summer). The taxi driver was friendly, even though he didn’t speak much English. As we drove into the capital city of Kosovar, we saw Bill Clinton Boulevard and a large mural of Bubba himself.

Kosovars love Americans because the US (along with NATO) helped them in response to Serbian aggression during the Kosovo War of 1999. Kosovo had been a semi-autonomous region of Serbia after the break-up of Yugoslavia. Serbia’s people are ethnically Serbs and primarily Eastern Orthodox in religion (~85%), and Kosovo’s people are primarily ethnic Albanian and Muslim, (although they are considered to practice Islam to a low standard, with not many regularly attending a mosque). This ethnic and religious tension boiled over in the post-communist, formerly Yugoslav world.

The Serbs, under President Slobodan Milosevic, revoked Kosovo’s autonomy and a harshly repressive Serbian-led regime was installed.  Albanians were largely purged from state industries and institutions.

Kosovars wanted for independence and in response Milosevic sent in secret police, army and paramilitary troops in March, 1999 to crush any dissent.

Widespread violence broke out in Pristina. Serbian and Yugoslav forces shelled several districts and, in conjunction with the paramilitaries, conducted large-scale expulsions of ethnic Albanians accompanied by widespread looting and destruction of Albanian properties. Many of those expelled were put onto trains apparently brought to Pristina’s main station for the express purpose of deporting them to the border of Macedonia, where they were forced into exile. The majority of the Albanian population fled Pristina to escape to persecution.

NATO attacked the Serbs in a bombing campaign approved by Clinton. NATO troops entered Pristina in early June 1999 to bring peace. The UN set up a provisional administration to help the Kosovars rebuild their country. The 45,000 ethnic Serbs in Kosovo left to go to Serbia. Kosovo’s parliament declared independence in 2008, although even today some countries do not recognize this claim.

Milosevic was subsequently indicted on the war crimes of genocide and crimes against humanity.  The trial, which started in 2001, dragged on for five years but Milosevic died of a heart attack while in prison.

Today Pristina, although struggling economically, is on the upswing. The small city center is lively and full of cafes and restaurants. There aren’t many tourist attractions.  A popular thing to do is to meet with friends and drink coffee.

While in Pristina we had the opportunity to stay at the home of a man I’ll call George. He quickly became my friend and I enjoyed talking with him about Kosovo’s history. During the 1990s, George worked as a translator for Kosovar leaders. On several occasions he was in meetings with Milosevic and other Serbs while working for Kosovo.

On a visit to Pristina in the 1990s, Mother Teresa stayed at George’s home. Regardless of who the guest is, George is a gracious and thoughtful host.

It was amazing to me that George knew both Mother Teresa and Slobodan Milosevic. I can hardly image two people who were farther apart on the spectrum of human life.

As I walked around Pristina, I realized that the future is wide open for the city and for Kosovo. Most of the UN reconstruction and influence from the past 15 years is gone. The conflicts of the 1990s are a generation in the past. The Kosovars, and especially the young people, are taking control of building their own future.