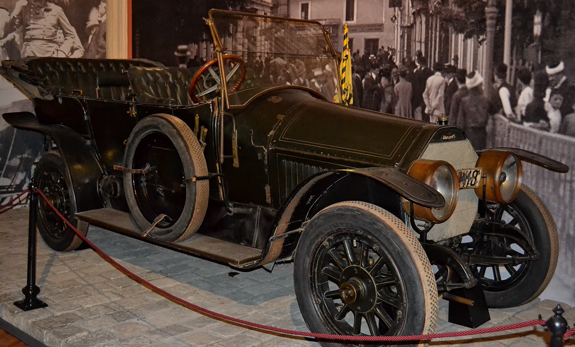 One hundred years ago Archduke Franz Ferdinand and his pregnant wife Duchess Sophie left Vienna, Austria to visit the provincial capital of Sarajevo, Bosnia. Franz Ferdinand was the nephew of Franz Joseph, the Emperor of the Austro-Hungarian Empire, and at 50 years old was the heir to the Habsburg throne.

There was a lot of unrest in the empire.  Various factions in far flung regions wanted independence from Austrian rule.  One group in Serbia, called the Black Hand, was formed by Serbian army officers with the purpose of liberating Serbs living under Austro-Hungarian occupation. The Black Hand decided that they would assassinate the Archduke. They recruited three young Bosnians to carry out their plan.

The royal couple were on their way to a civic reception at Sarajevo’s city hall when the violence began with a conspirator tossing a homemade bomb from a bridge over the Miljacka River. It bounced off the folded convertible cover of the Archduke’s car and bounced under the vehicle traveling immediately behind them before exploding. The Archduke and his wife were unhurt but occupants of that car suffered injuries.

After speeches at the city hall, the couple left the reception to go to the hospital to visit people wounded in the bombing attempt. With the Archduke in a military tunic and helmet, and the duchess in a dress of white filigreed lace with a matching hat and parasol, they headed back along the original route through the city and straight to their fateful encounter with a young man named Gavrilo Princip, one of the young Bosnians.

After learning that the first assassination attempt had failed, Princip thought about where he might make another attempt.  He waited outside a place called Schiller’s Delicatessen near the Latin Bridge over the Miljacka River.  On the drive from the city hall to the hospital, the driver of the Archduke’s car made a wrong turn. The driver stopped the car to correct his mistake. However, there was no reverse gear in the car, so security men had to push the car backwards. Unfortunately for millions of people, the car had stopped right in front of Schiller’s Delicatessen.

Princip stepped forward and fired twice with a pistol from a distance of only five feet away. He hit Franz Ferdinand in the jugular vein, and Sophie in the abdomen. Both died in the car on the way to the hospital.

The assassination set off a chain reaction of events that led to the Great War of 1914-1918.  Millions of people died, empires crumbled, and 20th century history started down a dark path which lasted for the next 70 years.

On the day of the crimes Princip was 27 days short of being 20 years old, so by law he couldn’t be charged with the death penalty. Instead he was sentenced to 20 years in prison. However, he died three years later in prison of tuberculosis and malnutrition.

While in Vienna I read that the Museum of Military History (the Heeresgeschichtliches Museum opened a new wing of the museum devoted to telling the story of World War I and commemorating the 100 year anniversary of the start of the conflict. As a history buff, and especially a 20th century military history buff, I knew I had to pay a visit to this somewhat obscure Austrian museum.

After a subway ride, a tram ride, and a rainy hike through a park, I finally made it to the Museum. The new World War I exhibits were excellent. I highly recommend a visit to this museum if you like history and find yourself in Vienna someday.

The Museum also has a longstanding exhibit about the assassination. The car that Franz Ferdinand and Sophie were riding in is displayed.  The car is a 1911 Gräf & Stift Double Phaeton convertible luxury limousine.  It was owned by Count Franz von Harrach, who was in the front seat of the car at the time of the assassination.

The exhibit also includes the military uniform that Franz Ferdinand was wearing (complete with original blood stains!), Sophie’s clothes, the chaise lounge on which he was declared dead, and the pistol used by Princip that changed the world.