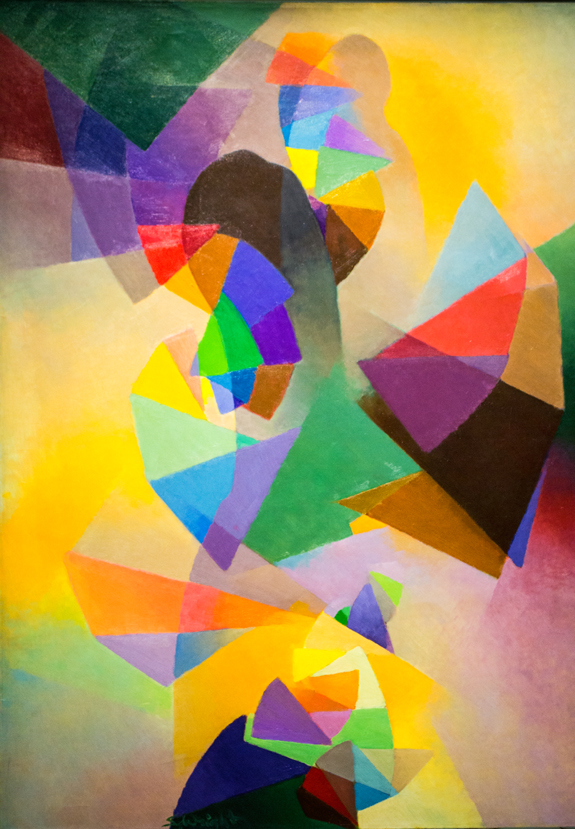 Since Paris is one of the best cities in the world to see art, I thought it might raise my artistic and cultural awareness level to visit a museum. Of course, Paris is known for the Louvre, which some say is the best art museum in the world. I went there once before and got lost for hours in the Egyptian section in the basement. When I finally found my way out, I only had enough energy to see the Mona Lisa before my legs gave out.

The Louvre contains paintings created before 1848.  For the newer stuff, I would have to go somewhere else. I hadn’t understood the modern art I’d seen last year in Munich.  So I was determined to give it another try.

I walked on a rainy day through Le Marais to the Centre Pompidou, which houses the Musée National d’Art Moderne, the largest collection of modern art in Europe. The Pompidou is a very strange looking building, built in the style called “Post-Modern/High-Tech,” whatever that is.  It looks like the builders went on strike in typical French fashion and walked off the job before completing it.  The building has ugly pipes on the exterior and metal frames that look like scaffolding.  When it opened, Le Figaro (a Paris newspaper), exclaimed “Paris has its own monster, just like the one in Loch Ness.”

After riding many escalators that appeared to be glued to the outside of the building, I arrived on the fifth floor to re-start my modern art education.

This piece reminds me of some 1930s Soviet propaganda extolling the virtues of universal socialism. The colors are too dull and all I can think of is that I don’t want to work there. I would probably hit my thumb with the hammer.

I like the bright colors in these two works.  They would be pleasant to hang on the wall of my office.

It’s interesting that these were done independently, and many years apart, by a married couple.  I can imagine how they might have met in a Parisian cafe….

Robert: “Hey baby, I am an artiste.  Want to see my art? I use lots of bright colors and I like triangles!”

Sonia: “Trés magnifique! I am also an artiste! I use lots of bright colors too, but I prefer circles.”

Robert: “We have a lot in common. Let’s drink some coffee and chain-smoke Gitanes until that little Spanish guy shows up.”

Here’s another piece with lots of bright colors. It puts me in a good mood just to look at this one. Since it is modern art, I have no idea what it is supposed to be.  But the artist called it “The Prophet.”

After looking at lots of paintings of incomprehensible colored shapes, I was yearning to see something I could recognize in the real world. I came across this one that I liked. It made me feel – je ne sais pas.  It is entitled “Young American Girl – the Dance.” However, I can’t pick out the girl and I can’t tell if she is dancing.

Most famous painters of the early 20th century were men. Being men, if they were going to paint the human form, they would most likely paint a woman. Somewhere I saw a statistic that less than 3% of the artists whose work is displayed in modern art museums are women, but 83% of the nudes shown are female.  This led to the complaint that to get into a modern art museum, women need to get naked.

In this painting, I can finally recognize the girl. I like the color of her dress, and she looks like she might be, ahem, a little cold. Something about her fingers looks creepy though. She’s also way too serious. Since this woman has clothes on, I’m guessing it was painted by a woman.

Picasso painted lots of nudes. He used wives, mistresses, and lovers as models, but hopefully not ever in the same painting. That would take some world class explaining. I don’t think this woman is attractive, even though she’s naked. She has really big hands and feet, and I think she’s giving me the stink eye!

The only thing I learned during my visit to the Pompidou Center was that the modern artwork that seems to get my attention includes bright colors of abstract shapes or a naked woman.  Or both of those in a single painting.