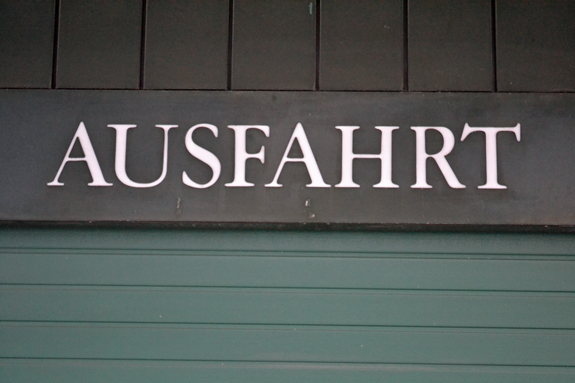 We were barreling down the Autobahn in southern Austria at 170 km/hr (106 mph). I was pushing the little Mini as fast as it would go in order to not be devoured by the bigger Audis and the BMWs. We had left Bolzano, Italy (in search of Oetzi the Iceman) that morning and were heading back to Munich. After surviving the Swiss mountain pass (see Trouble in Switzerland), we had enjoyed several wonderful days in Nice (View of Vieux Ville in Nice), and endured painful road construction on the Italian Autostrada near Milan and Genoa. We were now in the Austrian Alps south of Innsbruck and the views were fabulous.

“I have to go to the bathroom,” said my daughter, who was crammed into the miniature back seat of the Mini.
“So do I,” said my wife.
“OK, I’ll take the next exit to make a bathroom stop,” I replied.

At the next exit I got off the Autobahn to find a rest stop, gas station, or restaurant where we might find the proper facilities. Instead I found more road construction.

I followed the detour signs and wound the Mini through multiple hairpin turns down a narrow road until we arrived at what looked like a truck stop. At least it used to be a truck stop. Currently all of the buildings were closed and the parking lot was empty except for a couple of trucks.

“You two are going to have to hold it. Everything looks closed. Maybe it’s because of the road construction. Let’s get out of here.”

I drove around the area looking for a way out and back to the Autobahn. We couldn’t go out the way we came in because it was a one way temporary road. After several minutes of searching I determined the only way out of the area was through a gate. I pulled up to the gate and checked the control box. Everything was in German. It looked like I needed to insert a special card into the machine in order for the gate to go up and let us out. This I did not have. I am not a trucker on the Milan to Munich route.

I backed out of the gate lane about 50 meters and turned the car off. We had three choices. Drive the wrong way up the narrow one way road with the hairpin turns and gamble that we wouldn’t run into a semi, wait for one of the sleeping truckers to wake up and need his espresso, or ram the gate with the Mini.

Door #1 sounded too risky to me. I had no confidence in the Mini’s ability to withstand a head-on collision with a semi. Option C also seemed like a bad idea, especially since it was a rental car and I would have to pay for the damages. It would have to be Plan B. We would have to wait it out.

Luckily, it wasn’t long before one of the trucks lumbered toward the gate. As the truck reached the gate, I snuck in behind it. As the barrier went up, I followed the truck through the gate to freedom.

The road took a convoluted route up, down, and around but eventually sent us back onto the Autobahn. I waited to get off the Autobahn until I found an official rest stop. The ladies did their business and on we went to Munich.

Several months later I saw a charge from Sixt, the German car rental company, on my credit card statement. It was a mystery to me, since it had been a long time since I rented the Mini. After some communications with Sixt, I learned that the Austrian and Italian roadway bureaucracies had collectively determined that I had defrauded them of a toll fee. According to the Italians, I had gotten on the Italian Autostrada through a toll booth and never exited. I had vanished from the Autostrada without paying the toll.

The Italians told the Austrians, who in true Teutonic efficiency then tracked the Mini to Sixt. I was billed for the missing toll fee, an extra fee for losing the toll slip, a fine for driving on the road without paying the toll, and administrative fees for the various agencies to handle all of this business. It totaled $184.

I didn’t even think about disputing these charges. I would lose any effort to battle the European bureaucracy (for example, see the Swiss Train Chief). It was an expensive bathroom stop, and the bladders stayed full throughout.