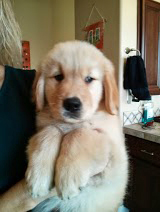 Zakynthos is in the Ionian Sea between Greece and Italy. It was once ruled by the Venetians, who called it Zante. It is still known by both names. Today it is a tourist center for sun-seeking Scandinavians and Germans, as well as for Greeks from the mainland. I was spending a few days on the southeast coast of the island, because that is where the best beaches are.

It turned out this traffic jam was only three cars long. After a couple of minutes, the lead car moved on, followed slowly by the car in front of me. I inched forwarded to prepare to take the next hairpin turn and stopped again. There was a puppy in front of me.

He had sat down in the middle of the road. Again. Now I knew the reason for the stops. I pulled my car to the side of the road and jumped out.

He was a cute little guy, all big feet and floppy ears. He was some kind of mutt but with a nice coloring of buff yellow, white, and light brown. He was about three or four months old. He came over to me as he wagged his tail. I scooped him up into my arms. He started licking my face.

“Hey little guy, you can’t wander around in the road like that. Somebody is going to run you over.”

There was an old house at this turn of the road. With the pup in my arms I walked to the front door and rang the bell. There was no answer. I banged on the door. There was still no answer. After ringing and banging for a while I gave up. Maybe it’s not his house?

I walked down the road to the next house and started ringing that door bell. There was no answer at this place either. Did everyone go to town tonight? The pup kept licking my face.

Those were the only houses around so I turned to walk back to my car to wait until somebody showed up. I couldn’t in good conscience leave the pup alone.

Out of the corner of my eye I saw a middle-aged woman pushing a wheelchair towards me. A very old woman was in the wheelchair. They were about fifty yards away. Maybe they could help me find the dog’s owner.

I waited by the side of the road. As they got near me the woman got a big smile on her face and starting talking excitedly in Greek. Of course I had no idea what she was saying.
Like a tourist, I started talking to her in English.

“Hi. I found this puppy in the road. He almost got run over by a car. Do you know whose it is?” I said.

“No English,” she said, then rattled on in Greek. She did point to herself, the dog and the first house. This was a good sign. It must be her dog, that must be her house, and the old woman must be her grandma. She must have walked down the road to grandma’s house to get her or perhaps was taking her for a walk.

Since she was pushing the wheelchair I carried the puppy as we walked back to her house. When we got to her driveway, I started to set the puppy down. The woman chattered away again. I didn’t understand the words but her hand motions indicated that she wanted me to keep the pup and take it away with me.

“Whooaa, lady, I like dogs, I love puppies, and this seems like a nice one, but I can’t take your dog with me,” I protested. She didn’t understand me. She kept going with her hand gestures and rapid fire Greek.

I tried to explain that I was just visiting and that I was leaving the island tomorrow. I couldn’t take a dog with me. Besides, I already had a new puppy reserved for me back home. I was picking it up in a few weeks.

Eventually she realized that I meant business. I set the puppy down and told it to stay. He sat down and looked up at me with sad eyes.

I said “Arrivederci” (since I don’t even know how to say goodbye in Greek), got in my car, and drove away.