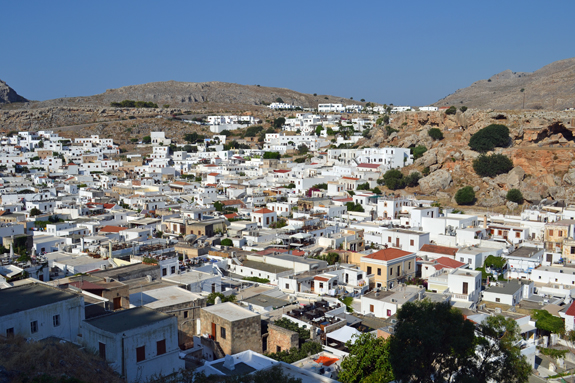 I followed the signs through the winding backstreets of the old Greek town of Lindos, on the island of Rhodes.  The streets were only about eight feet across and were too narrow for most vehicles.  The square buildings were painted white in the Grecian style.  The buildings had old wooden doors and small blue address numbers.  Some 17th century mansions have been converted into restaurants, where today’s diners can sit on the rooftops on hot summer nights and eat traditional Greek food.

The town was built many centuries ago at the foot of a rock that is 350 feet high.  The rock towers over the Aegean Sea with sheer cliffs on the seaward side.

In the sixth century B.C., a tyrant called Kleoboulos ruled Lindos for many years. Kleoboulos led the Lindians to build an Archaic temple of the Greek god Athena at the highest point of the rock.  It took the place of an earlier temple structure that had been destroyed.  The new acropolis was a place to give votive offerings and sacrifices to Athena.

Unfortunately, this temple burned down in 392 B.C.  Perhaps one of the worshippers accidentally knocked over a candle.  Not to be deterred, the Lindians rebuilt the temple.

Today, the ascent to the acropolis is still by the same steep road as used in antiquity.  I found the start of the road at the back edge of the town. I hiked up the narrow road that wound around the rock. I passed old women who were setting out tablecloths and other locally made linens.  They were ready to sell their goods to the busloads of tourists who would be following me later in the morning.

Near the top of the rock I walked through an outer entrance to a medieval fortress.  The Knights of St. John conquered the island of Rhodes during the Crusades and later fortified the existing structures in the 14th and 15th centuries.

Further inside the fortress is a large stairway, originally built in the first century B.C., which leads up to something called a stoa.  A stoa is a covered walkway or portico.

Athena’s temple was isolated from the outside world by a wall with five entrances.  The inner stoa flanked a courtyard in front of the temple.

The acropolis was destroyed during Ottoman rule, which started in the 16th century.  The Italians occupied the island of Rhodes in the 1930s and partially restored some of the temple.  Today, the Greeks continue the restoration work at a pace commonly referred to as “island time.”  I saw two guys in overalls operating a power saw to cut through some old stone for a few minutes before stopping for a smoke break.

As I walked down the road back to town I wondered what it would have been like here 2,400 years ago.  How did the Lindians react when their leader told them to build a temple for worshipping a statue made of stone?