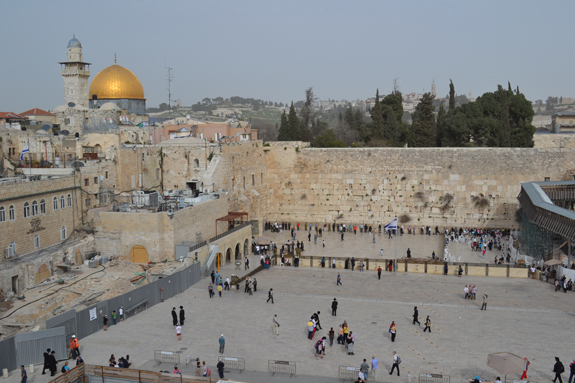 I stepped into the darkness from the bright sunshine. I could not see a thing.  I slowly shuffled my feet forward, inching along into the void, afraid of bumping my big toes or my nose into something solid.  My eyes started to adjust and I began to see a myriad of lit candles surrounding me. I heard a solemn voice reading names, ages, and place names aloud.

This was the Children’s Memorial at Yad Vashem, the Holocaust History Museum in Jerusalem, Israel.  It is a tribute to the 1.5 million Jewish children killed during the Holocaust.  The memorial was hollowed out from an underground cavern on Mount Herzl.  While walking through the memorial, the visitor hears the names of murdered children.

While I was in the memorial I felt transported to another world. It was a disorienting experience but utterly absorbing.

Yad Vashem includes an excellent museum commemorating the six million Jews and other people murdered by the Nazis and their collaborators.  It explains events of the 1920s-1940s in sobering and informative exhibits.  I’ve always had an interest in history and I found this museum wholly engrossing.

I visited Jerusalem with my Israeli friend Moshe. After our tour of Yad Vashem we drove to the old city in Jerusalem and parked by the Jaffa Gate.  Jerusalem is built on a hill, with the Temple Mount as the highest place.  The Temple Mount was where the first and second temples were sited.  The old city was accessed in ancient times by one of four gates in the city walls.  The current walls, built by the Turks in the 16th century, have 11 gates, only seven of which are now open. We passed through the Jaffa Gate and wandered the narrow and winding lanes of the Jewish Quarter.

At one location in the Jewish Quarter archeologists have excavated a base section of the original town wall. Only rubble remains of the base, with a sign on the wall indicating the original height of the wall.  I couldn’t read the sign, but it looked like it was about 30 feet high.  The base was about 15 feet wide.  The wall must have been quite impressive in those times and very useful as part of the defense of the town.

In another spot there is the excavated main road of Jerusalem built by the Romans.  This road, called the Cardo, was situated on the north/south axis and was lined with tall columns with carved bases and tops.  Only a few of the columns remain.  Part of the Cardo is now covered by buildings but the original road level is a lane filled with fancy shops.  Along this road is a well-like structure where one can look down to see the remains of two earlier structures, one from Roman times and the other from the time of Nehemiah (approximately 440 BCE).

We walked down to the square and entered the area in front of the Western Wall.  Moshe and I covered out heads with paper yarmulkes provided to us.  The wind was blowing and I had a hard time keeping mine on my head!   With one hand on my yarmulke we approached the Wall.  The area is divided up into two segregated sections, a men’s section and a women’s section.  For reasons unknown to me the men’s section is twice as large as the women’s section.  Did the authorities think more women than men want to pray to God at the wall?

Worshippers write their prayers on pieces of paper, stick the papers in cracks of the wall, and pray at the spot.  The wind was blowing some of the prayer papers onto the ground.  I wondered if a cleaning crew came out at night to clean up the papers, including the ones still stuck in the cracks so that the next day’s worshippers would have empty cracks to fill. 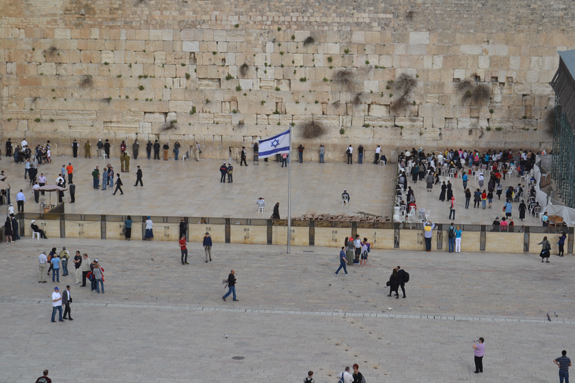 Many of the worshippers were Orthodox Jews in black clothes, with black hats and the sides of their heads sporting ringlets.  Moshe and I walked to the side of the wall where there is a cavern dug into the hill.  This opening is a prayer, library, and study room for Orthodox Jewish men.  As we were walking out a couple of Orthodox Jews approached us for a handout and said something in Hebrew to us.  As we got out of earshot I asked Moshe what they were saying.  He replied that they were trying to convert him to become Orthodox.

Moshe told me that he was in Jerusalem right after the end of the Six Day War in 1967 and the site looked very different.  Prior to this time the Arabs had control of Jerusalem.  The Arabs over the centuries had built houses at that spot (which was called the Moroccan Quarter). The base of the Western Wall was covered up, and higher parts of the wall were visible only in a small space behind some buildings.  The Israelis tore down the houses, excavated the base of the wall to expose the temple wall and provide better access, and built the plaza.

After a stroll down the market street it was time to go.  It was very interesting to visit Yad Vashem and Jerusalem with an Israeli.  It was experience to remember.  Thanks Moshe!