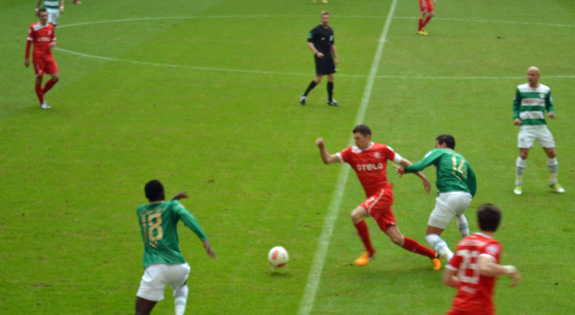 Tens of thousands of fans yelled as the Fortuna striker lined up to take the penalty kick.  The goalie for the opposing team danced back and forth on his toes, trying to guess which way the striker would kick the ball. The cheers reached a crescendo as the striker ran to the ball. He kicked to the left corner of the goal in a low hard shot. The goalie guessed the ball would come in that direction and he jumped full length milliseconds before the kick with his padded hands outstretched.  The ball hit his fingertips and deflected wide of the goal post. The fans groaned together in a giant “Ooooooohhhhhh.”

It was only two minutes into the game and the crowd was already in a frenzy.  I think that all the pre-game drinking might have had something to do with it.  While on the train to the stadium I saw a healthy percentage of the fans drinking from open bottles.  That’s one way to avoid high stadium prices. The fans were easy to identify because all of them wore the red and white of Fortuna Düsseldorf.

This was a mid-season Bundesliga match between Fortuna and SpVgg Greuther Fürth in the top fussball league in Germany.  Fortuna had toiled for years in lower leagues but had recently moved up to the top league.  However, if they finished as one of the last two teams in the league standings at the end of the season then they would get “relegated” back down to the second league.  At this point they were comfortably in the middle of the pack.  The leader of the Bundesliga was the powerful FC Bayern München. This club was hated by other fans for their longstanding successes and their ability to build a championship team by outspending their rivals.

After fifteen minutes of spirited but indecisive play, a Fortuna forward received a long pass from a midfielder and streaked towards the goal.  Two Greuther Fürth defenders challenged the Fortuna attacker.  The defenders misplayed the ball and the Fortuna forward darted between the defenders on a clear path to the goal.  The goalie came out to meet him in a desperation move as the attacker drilled an arcing shot.  The ball curved around the goalie and into the back of the net.

The fans jumped to their feet and erupted as one: Tor! (goal)  The goal scorer was mobbed by his teammates in a wild celebration. The fans sang the team song and congratulated each other on their loyalty to Fortuna.

Would a visit to a Bundesliga match be complete without a beer and a pretzel?  Of course not!  At halftime the fans streamed out to the concourse to load up for the second half.

The rest of the game was uneventful.  There were some shots on goal but no more scoring.  As the clock wound down the fans left their seats in a happy mood.  Their team had gained three points in the standings with the 1-0 win. Relegation to the second league was getting less likely with each passing week.

One thing stayed in my mind as I followed the thousands of fans to the U-bahn: