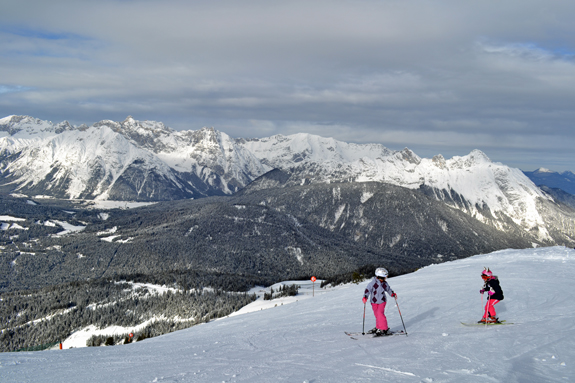 “Do you think I should wear a fur coat like that guy? What about a man-purse?”

I asked my wife as we strolled along Bahnhofstrasse, one of the main streets of the ski town of Seefeld, Austria.  The man had on a full length mink coat, and the obligatory fancy leather man-purse on a strap around his shoulder, but was bare-headed despite the cold. I heard him speak Russian to his companions.  I’d been told the town was currently overrun by rich Russians.  Perhaps it was the winter convention of the Russian Mafia?

“No, you would look gay,” she replied.

“But this guy is pushing a stroller.  He probably isn’t gay.” I said.  However, I couldn’t see a woman who might be his wife, girlfriend, escort, concubine, or czarina among the crowd on this busy street.

The mink coat man stopped to look in the window of the Swarovski store.  As we moved past him I glanced back at the stroller.  It held two small dogs.

We were invited to Seefeld by friends who were staying for a week’s vacation to enjoy the brisk, refreshing mountain air and to go skiing. We hopped the train in Munich and headed south.  The train was full of city people with their skis, heading to the mountains to enjoy the newly fallen snow.We met a young American man on the train who worked for the US ski team.  He told us there was a ski event being held in Seefeld that weekend.  He wasn’t an athlete but part of the team’s support staff.  He encouraged us to watch the event and cheer on the Americans.

After arriving at the train station in the little mountain town, I noticed a poster advertising the ski event.  It was called a Nordic Combined competition for the World Cup professional ski tour.  The only thing I know about ski competitions I learned from watching the Olympics for an hour and a half every four years.  I also remember watching ABC’s Wide World of Sports when I was kid.  Seared into my memory is the endlessly repeated clip of the ski jumper getting mangled in a horrific crash as the announcer intoned “the agony of defeat.”

The Nordic Combined has two parts, a ski jump and a 10km cross-country race.  At the scheduled time we walked to the edge of town to the ski jump hill and joined the international crowd cheering on the athletes. One after another each jumper sped down the ski jump and launched themselves high into the air. They seemed to hang there for a few seconds, leaning forward to be as aerodynamic as possible, with their toes pointed out and their ski tips up.  Then they abruptly changed position for a graceful landing. The crowd roared for every jumper.

The cross-country race was held a couple of hours later.  The order and start time of the skiers were determined by their scores in the jumping competition. The fifty contestants were spread out over a couple of minutes of race time. The race track was 1.4 km long.  It was built into the bottom of the hillside and looped around through the forest.  The finish line was at the base of the ski jump hill.  Each time a skier from a particular country came around the loop in front of the crowd, his countrymen and countrywomen shouted encouragement in their language.  There were at least Austrians, Germans, Swiss, French, Norwegians, Danes, and Americans in the race and in the crowd.

In the end, a German skier won the race.  He had come from six or seven places behind at the start of the race to break the tape. The large number of Germans present were ecstatic and proceeded to celebrate their victory in the bars and cafes of this usually sleepy little alpine town.

The next day we took to the slopes.  I hadn’t skied in over ten years.  The last time I skied I couldn’t walk the next day because my knees hurt so badly. I was determined to take it easy and enjoy the afternoon.

The afternoon was perfect for skiing.  There were plenty of blue skies, light winds, and fresh snow. The mountain was full of children bombing down the slopes like bottle rockets. Other children skied in a zigzag line, following their ski school teacher.  They were mastering the rudimentary snow plow technique at a very young age.

I was surprised to see two young girls all alone at the very top of the mountain.  No adults or guardians were in sight. In the U.S., we would call the start of this run “double diamond.”  That’s the toughest ski run, for experts only.  I thought it was incredibly steep.  Yet it didn’t intimidate these native Austrian girls. Off they went into the void.

Instead of skiing from this point, I went back down on the gondola. I needed to be able to walk to work on Monday.