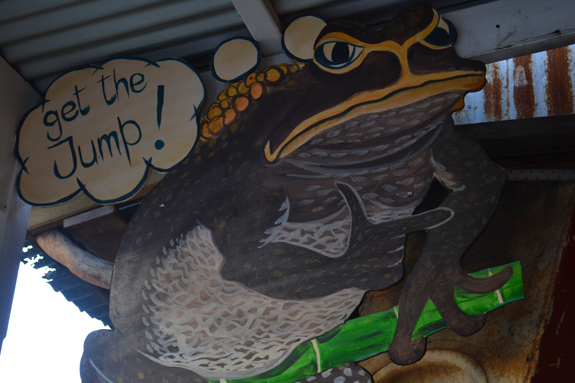 “Would you like to buy an entry in the race tonight, mate?”

A man plopped down into the booth next to me. He was crowding me, inside my personal bubble, and I could smell the beer on his breath. His hair was long, blond and dirty. His face was tanned and lined. He was rushing forward with his sales pitch. With the noise of the other diners, the music in the background, and his strong accent and slang, I could hardly understand a word he was saying. I’m pretty sure it was English (after all I was in Australia), but maybe they speak a different dialect up here in the FNQ – Far North Queensland. He didn’t have a leather vest on, had no hat, and wasn’t sporting a large knife. Instead, he wore a bush shirt that looked like part of a Boy Scout uniform. Yet, he reminded me of someone. Someone I had seen about twenty years ago.

Crocodile Dundee. In the flesh. Crowding me in this booth and trying to sell me something.

“It’s only five dollars. You could win two tickets for Hartley’s Crocodile River Cruises,” he said. “That’s where I work. I’m a river guide.”

“No, mate. It’s a race.” He then said a couple of sentences I found unintelligible.

“Ok. I’ll buy an entry.” I forked over a fiver, he gave me a ticket with number 92 on it, and he moved on to the next table.

My wife Lisa and I were sitting in the back of the Ironbar Saloon in Port Douglas, Queensland, Australia. As we ate our dinner, a crowd of about 50 people slowly filled up the room. As soon as I finished my dinner, the race was about to begin. There were a lot of Australian families staying in this beach town for spring break. Crocodile took the small stage. The school age children were excited for the race.

“Welcome ladies and gentlemen, boys and girls. It’s time for the nightly Cane Toad Race. Has anyone never seen a cane toad?” A few people raised their hands.

“This is a cane toad!” He put his hand into a bucket and pulled out a large, slimy toad. Its body was as big as my fist, with long muscular legs hanging below.

“The cane toad is not indigenous to Australia, mates. Back in 1935, the sugar cane farmers were in trouble. An insect called the cane beetle was attacking the sugar cane crop. Somebody learned that in Venezuela, home to the cane toad, they didn’t have problems with cane beetles. Therefore, it must be because they had cane toads to eat the cane beetles. So some bright agricultural scientist convinced the farmers to import 60,000 cane toads and release them into the wilds of Queensland.”

“Unfortunately, there was a big problem with this brilliant logic. The cane toad is a TOAD and not a FROG. Toads are terrestrial. They don’t climb trees like frogs; they hop along on the ground. And the cane beetle eats the sugar cane at the top of the stalk, which is about six feet off the ground. So this strategy failed miserably. The toads reproduced like rabbits (another non-indigenous animal problem in Australia) and now they’re a nuisance across the land. You may have seen cane toad road kill on our roads.”

“First thing to do before starting the race is to properly outfit our cane toads. They must wear the proper uniform per the Queensland Cane Toad Racing Association regulations. Here is the racing uniform.”

He pulled a half dozen colored hair ties from his pocket.

“A ring goes around the toad’s neck. According to the rules, it is the jockey’s responsibility to make sure the ring is properly affixed to the toad. In the race there will be six cane toads. Each cane toad will wear a different color, and will be coordinated to this chart.”
He pointed to his right, where a white board listed six names, each name associated with a color. The names were fanciful and descriptive – The Big Hopper, Whopper, Ozzy, Liberace’s Lad, Lulubelle, and Mrs. Amazing.

“It’s time to pick our cane toad jockeys. The jockey is a very important role in cane toad racing. A good jockey means the difference between winning and losing. For those of you out there who bought an entry in tonight’s race, please look at the number on your ticket.”

My ticket number was 92.

He stuck his hand into a bucket, swirled it around, and pulled out a ticket.

A surprised and uncomfortable middle-aged Australian mum in a bright orange sun dress cautiously took the small stage. Crocodile handed her a cane toad, this one called the Big Hopper. She looked like she was ready to freak out. Her face was pulled into a squeamish grimace. She kept moving the cane toad from one hand to the other, while dancing on her feet.

Crocodile pulled four more tickets out of the bucket. The four new jockeys took the stage and took possession of their racing cane toads. Three of the four new jockeys were young boys who enjoyed handling the amphibians. The fourth was a young woman who was as uncomfortable as the mum. She had just gotten engaged and Crocodile needled her about deciding to get married. The cane toads were assigned in turn – Whopper, Ozzy, Liberace’s Lad, and Lulubelle.

When getting the names of the jockeys and the names of their hometowns, Crocodile proceeded to crack jokes about the places. He used this opportunity to do some improvisational comedy in a typical Aussie style. The crowd roared.

I never win anything at raffles, auctions, or the like. Certainly nothing important or valuable. I started to calculate the odds of my ticket being picked for the last spot. There were about 40 tickets sold for the race, five of which were already picked. That left a chance of one in 35, about 2.857% (but who’s counting).

“There is one more jockey to be picked. The winning number is 93!” said Crocodile.
Bummer. I missed it by one. See? I never win anything.

I looked at Lisa and smiled. She looked at me with surprise. The crowd was looking around to see who had the last ticket. I felt like Charlie in the Chocolate Factory, getting the chocolate bar with the golden ticket.

“You go do it!” I yelled at Lisa. I don’t like being the center of attention. I don’t want to be on stage in front of 50 screaming Aussies.

She hesitated, but then committed. She joined the other jockeys on stage.

I must point out that earlier in the day we were shopping on the main street of Port Douglas. We darted in and out of the boutiques and souvenir shops. I would spend my usual 30 seconds in each store and then retreat to the sidewalk. Lisa was looking for a new sun dress. She eventually found a brightly colored one that she liked. She decided to wear it out to dinner.

“What’s your name beautiful, and where are you from?” asked Crocodile.

“My name is Lisa and I’m from the US,” replied my adventurous wife.

“America! Land of the free and home of the brave. Do you know how to stop two crocodiles from making luuuuuvvvvvv? Huh, do ya? ….. Give’em a Yank!”

“Mrs. Amazing! Whoooaa! Is that your husband back there?” asked Crocodile. He pointed at me and waved. Of course he knew I was. He sold me that ticket 20 minutes ago.

“Is she really Mrs. Amazing? Come on, give us the details!” shouted Crocodile over the din of the crowd.

“OK, jockeys. Your job is to drive these cane toads to glorious victory. Just like horse jockeys have a whip to prod their horses to go faster, you will have a whip. And here they are.”

He pulled six party favors out of his pocket. They were the kind of noisemakers that one blows on New Year’s Eve, where the paper unrolls and shoots out while the noise is made. He gave each jockey a noisemaker.

“Test your whips! You must hit your cane toads on the butt with your whip to get them to jump off of this table. When they jump off, pick them up and put them into this bucket. The first one in wins.”

While he was explaining the rules in his FNQ accent, the jockeys were testing their noisemakers, some blokes were cheering about a score in the Australian Football League championship game on the telly, the overhead speakers were blasting 70’s rock and roll, and the crowd was jostling for position to see the big race. Lisa didn’t hear the rules.

“Before we start the race, kiss your toads for good luck! Come on, kiss’em!”

The mum pulled a face and pretended to kiss her cane toad on the lips. She was about an inch away.

“That’s an air kiss! You can’t do an air kiss in this competition. We’re sanctioned by the Queensland Cane Toad Racing Association. Come on. You can do better than that!”

The embarrassed mum succumbed to peer pressure and meekly kissed her cane toad. I was now surely glad I pushed Lisa into being the jockey on my winning ticket.

One by one three of the other four jockeys kissed their cane toads. The young boys did it for fun and hammed it up for the crowd. The young fiancée’s turn was next.

“Come on luv, give that toad a nice big wet one. He might turn into a handsome prince, surely much better than that bloke over there!” he yelled as he gestured to her fiancé standing by the bar. She complied and pecked the toad.

It was now Lisa’s turn. Crocodile looked at her. The crowd stared. I was waiting for her to kiss the cane toad in front of this crowd. Unfortunately, I had left my camera at the hotel.

“Instead of giving it a good luck kiss, I’m going to give it a yank!” she said, playing off the earlier joke. She quickly pulled on one of the cane toad’s legs.

The toad promptly peed all over the front of her new sun dress.

Lisa screamed. The crowd went into a frenzy of laughter. For once Crocodile was speechless.

After the crowd died down and Crocodile found his voice again, it was time to start the race. He had the jockeys put their cane toads into a bucket. Then he dumped the bucket upside down in the middle of a table and yelled “Go!”

Mrs. Amazing, however, remained in place. She was resting, and didn’t want to hop. Then she decided to move, but after a couple of hops towards the edge she hopped back towards the center. Perhaps she was afraid of heights. They are terrestrial after all.

One by one the others finished. Except for Mrs. Amazing, who was still peering over the edge of the table at the abyss below. Crocodile bumped the cane toad with the side of his hand and sent Mrs. Amazing flying downward.

“Go! Pick up your cane toad and put her in the bucket!”

My non-winning streak continues. My entry finished in sixth place out of six entrants. But my jockey really is Mrs. Amazing.