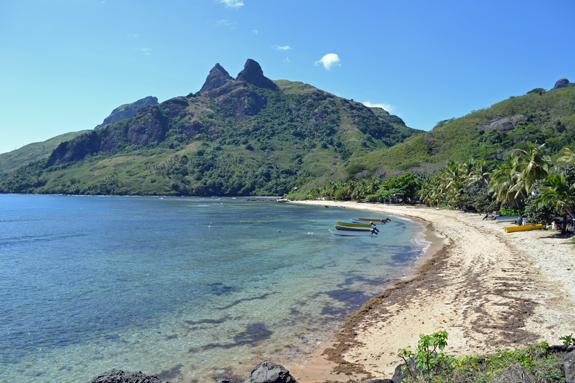 The reef in front of the Octopus Resort on Waya Island in Fiji starts five yards from the shore.  It has the most amazing snorkeling I have ever seen.  The reef is full of healthy and vibrant hard corals.  There are giant brain corals 20 feet in diameter, staghorn, elkhorn; more species than I can identify. I have been to several Caribbean reefs and they look wrecked compared to this reef.  Perhaps this is what the Caribbean looked like 100 years ago, before the overfishing, clumsy tourists, and coral bleaching.

There are many different kinds of fish weaving in and out of the coral.  I see bright yellow butterfly fish calmly grazing in pairs.  There are Picasso triggerfish cruising the shallows.  Bright blue damsels protect their territory from attack.  I catch a glimpse of an octopus as it slides under a ledge fifteen feet down. As I glide over a wall I see a large moray eel ducking in and out of a cavity at the base of the wall, ready to catch any tang foolish enough to swim by too close.

I see a dark cloud up ahead. It is a gigantic school of fish.  They are small, maybe six inches long, but there are thousands of them.  I find out later that they are sardines.  They form an ever changing mass about 20 yards long by 10 yards wide by 15 feet deep.  There must be ten thousand fish in the school.  I slowly glide into the school and it parts around me.  I try to be as still as possible.  The school envelopes me like I am the eye of the hurricane.  The fish circle me and from time to time I extend my hand to the moving wall of fish.  This causes a panic and the fish reverse direction and flee from the threat.  No one wants to be the fish on the outside of the school, to be eaten by a predator in the great circle of life.

In the afternoon I take a refresher course in scuba diving.  I think it’s a good idea since I haven’t been diving in ten years.  The instructor is a big, burly islander named Kuki.  Another guest at the dive shop is considering taking a Discover Scuba Diving class.  She asks Kuki how experienced he is at diving.  He tells her he’s been diving every day for 19 years! Kuki runs through the skills with me in the shallow waters a few feet off shore.  I am ready for diving again.

The next day Kuki takes me out into the bay off Likuliku Beach.  The first dive is at a site called Three Sisters.  We get our gear on and fall over the side.  Kuki doesn’t wear a wetsuit.  He looks like he has enough insulation as it is. We slowly descend about 30 feet. The assortment of hard corals is amazing.  Near one table coral is a cloud of tiny bright blue fish.  A school of tangs glide past us.

I follow Kuki as he winds his way along the reef. I try to relax and use only my feet, while keeping my arms folded across my chest.  My breathing slows and I achieve neutral buoyancy. Kuki stops by a bramble of coral. He points with his underwater pen at a lionfish.  We count five lionfish in this spot.  A lionfish has sharp spines to deter predators and gulps his unsuspecting dinner whole.

I see an anemone about two feet across.  It is home to two large orange clownfish nestling in the tentacles of the anemone. These fish are not quite like Nemo but a different species. A clam about one foot long slowly flaps its lips at me as I stare at its electric green color.

After 45 minutes of fabulous exploration it is time for our three minute safety stop.  We hover fifteen feet below the surface and watch the timer tick down. As I rise to the surface I’m happy with the dive.  The visibility was very good, the corals were excellent and we saw many varieties of fish.

After a break we head over to another dive site.  This one is called Octopus Garden.  I see many of the same things at this site, but because it’s so good I don’t notice until the dive is over.  The most memorable thing of this dive was seeing a large Hawksbill turtle.  I was at about 50 feet in depth and the turtle was grazing near a wall about 20 feet below me.  It hovered there for a few moments and then slowly moved away to deeper water.

Kuki gave me a high five and a fist bump once we were back to shore.  It was a great way to spend a morning in Fiji.