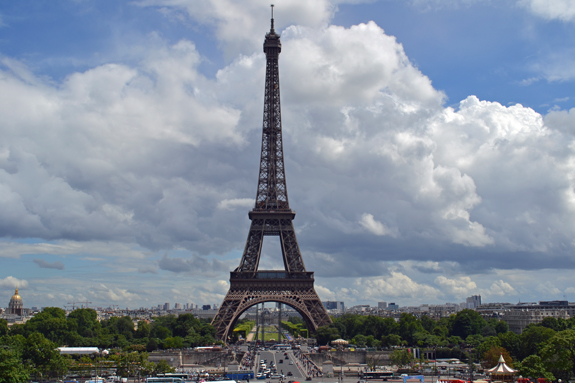 In any big city of the world there are many perils to try to avoid. One of them is the street crime of pickpocketing. Before returning to France for the first time in nine years, I read up on the latest news in Paris tourism. I was checking out the new attractions in the city and came cross an article warning tourists of the most recent scams. Little did I know that I would experience firsthand two of the main scams described in the article on my first day in Paris.

I left my hotel in the First Arrondissement after breakfast to go for a long walk around the Île de la Cité and the Latin Quarter. I had my typically large and expensive camera around my neck, clearly marking me as a tourist of the most garish sort. As I crossed the Rue de Rivoli in front of the Louvre Museum I noticed several scruffy looking young men loitering in the big empty plaza. From a distance I could see that the guys all had dark hair and swarthy skin. They were gypsies (more formally known as Roma).

In some situations I might cross the street again to avoid this gathering. I would definitely do that late at night or if I was accompanying my wife and/or daughter. But it was only 9am in a busy part of the city. There were many tourists walking towards the Louvre. So I kept walking.

By the time I got to the first guy, some of the other guys had spread out and were approaching other passersby. At least half of the guys had clipboards in one hand and a pen in the other. The other half of the guys were empty handed. Thanks to my pre-trip research, I knew I was about to be subjected to the Survey Con.

The Survey Con is a pickpocketing technique that is much more blatant and obvious than the usual bump on the crowded Metro. It works best when the thieves have blended into a crowd of people walking down a sidewalk. A first thief is the survey taker. He (or she) approaches the mark (me in this case) and politely greets the mark and asks if you wouldn’t mind taking the time to answer a few questions for a survey of great importance. The survey taker may adapt the pitch according to the age, socioeconomic status, and perceived interests of the mark. The approach works better when the survey taker is well dressed, articulate, and formal. This puts the mark at ease. It works particularly well when the survey taker is an attractive young woman and the mark is a man (of any age).

The mark answers the questions of the survey, and the survey taker notes the answers and engages the mark in a dialogue. While the mark is temporarily distracted by thinking about his or her answers, the second thief (the accomplice) comes up behind the mark and pickpockets him or her. In some sophisticated rings, there may be multiple accomplices who crowd and jostle the mark, and any one of them will lift the goods from the mark.

These guys were crude amateurs. For one thing, there were at least a dozen of them in the same spot, all trying to run the same con at the same time on multiple passersby. They were dressed like they had slept on the street and they were doing this in a wide open plaza instead of a crowded sidewalk.

The survey taker approached me and I stared him in the eyes and firmly shouted “Non!” I briskly walked away without looking back to hopefully lessen the chances of him being persistent and following me. The tactic worked. He gave up on me and looked for an easier mark.

It concerned me that the Paris police do nothing to stop this behavior in front of the biggest tourist attraction in the country.

As I walked around the city over the course of two days I was approached three different times with the Ring Con.

The Ring Con is another wide open pickpocketing technique. The thief spots a potential mark in a crowd or walking on a sidewalk, unobtrusively approaches the mark, and bends down and picks up a gold ring off the ground.

“Excuse moi, monsieur!” the thief will say. “I think you dropped this ring.”

The mark stops to respond to this statement, looks at the ring, and checks his or her fingers, purse or pockets.

“No, you’re mistaken. It’s not my ring. It must be someone else’s ring.” says the mark.

While the mark is distracted by this ruse, an accomplice comes up from behind and pickpockets the mark.

I don’t know why, but each time I was approached in this manner the thief was a respectable looking old woman (a different woman each time). Maybe the old woman thinks that younger people will automatically think she is trustworthy and honest in trying to return something of great value to a stranger. Certainly I would never think my mother or grandmother would be part of a pickpocketing tandem.

I think also that the thief palms the ring with some sleight of hand instead of actually picking it up off the ground.

The first two times this happened to me I instinctively turned away from the old woman and kept walking briskly past. The third time I had had enough.

I looked threateningly at her and rattled off an angry stream of expletives. I yelled that it was the third time I’d seen the Ring Con since yesterday and that I was going to call the gendarmes.

She turned and ran away.

P.S. Paris has the reputation of being the world’s capital of rude waiters. In past visits, I have noted that Parisian waiters are snooty, snotty, and surly. The tourist commission must have sent all of the waiters to a reeducation camp. On this brief mid-summer trip every waiter I had was friendly, smiling, and helpful. I was beginning to wonder which city I was really in! What a change for the better. Go to Paris before the old waiters come back from holiday.