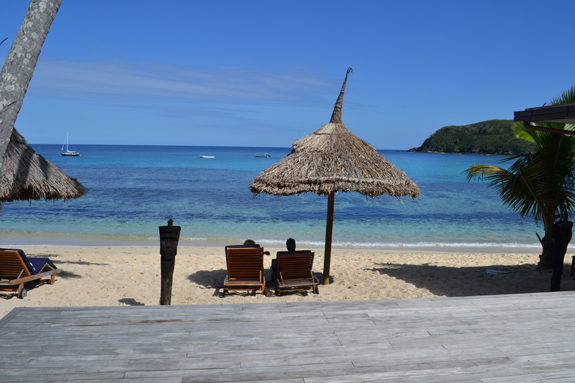 A special welcome ceremony is held every night that new guests arrive at the Octopus Resort on Waya Island in Fiji. The special welcome ceremony includes the kava ritual. Kava is the root of the pepper plant. One of the islanders named Moses put the kava in a cloth and soaked the kava in a pot of water. Moses then wrung out the cloth and repeated the process until the water turned a muddy brown color. After a while, he proclaimed the kava ready for the ceremony.

An older islander called Tiko greeted us new guests. He encouraged us to sit on the ground in a circle along with a couple of islanders. Tiko explained that drinking kava is a social function where people greet each other and pass the kava cup. The process begins with a newly appointed chief for the evening being given the first cup of kava. When receiving the cup, the recipient claps once, says “Bula!,” drinks the whole cup, and then claps three times. However, saying “Bula!” is only done on the first round of drinks, because after that everyone has greeted the group. When the recipient says “Bula!” the others respond in kind, and clap along with the recipient.

“What is your name?” Tiko asked me as he stared me in the eyes.

“Steve, you are the chief for this evening. You will get the kava first.” said Tiko.

Great! I have never been named chief of anything before. I like this place. What perks do I get for being chief? The best hut in the village? The prettiest young island girl? A new pig for my pig pen?

“That’s very nice of you Tiko. What does being chief mean?” I asked.

“You get to drink the kava before everyone else. That is all.” said Tiko.

Tiko then nominated the guy sitting next to me to be the speaker.

“You will be the speaker,” said Tiko. “The speaker’s role is to decide whether the women around the circle will drink a full cup of kava or only one half of a cup.”

“I proclaim that the women should drink half a cup, but the men should drink two full cups per round!” said the guy. (I found out later that he is Swiss. I have had past negative experiences with certain Swiss individuals (see The Swiss Train Chief), however I made friends with him after and he was a very nice fellow.).

Tiko dunked the cup into the kava pot. He filled it to the rim and handed it to me.
I clapped, said “Bula!” and drank the cup of kava. It tasted like lukewarm dirty water. I couldn’t embarrass myself though, no gagging or regurgitation allowed. I had to down it. I drained the cup and handed it back to Tiko. He refilled it and I repeated the task. Then I clapped three times and passed the cup back to him. He filled the cup and passed it to the person on my right.

Kava is a mild narcotic. It is supposed to numb the tongue and relax the drinker. I wondered who discovered this substance and how it got to become such a ritual. Did some enterprising islander hundreds of years ago start chewing on a plant root, catch a buzz, and tell his friends?

“Hey guys, look what I found out. Take this plant root and chew on it!”

“You’re crazy. Get back to work filleting the fish for dinner tonight!”

Despite having drunk a fair amount of kava, I didn’t feel the effects. Maybe I am immune to kava because it rhymes with java and I don’t like coffee.