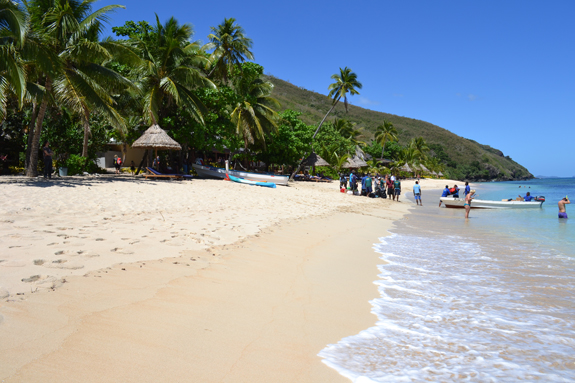 The two man band played their guitars and sang a local favorite while the resort staff stood in a line leading from the waterline across the sand towards the resort.  The staff members were dressed in brightly colored floral print shirts and dark skirts.  Each incoming guest jumped with a splash from the small boat into the last foot of the Pacific Ocean. “Bula!” said each staff member as they shook hands with each guest.

Bula means hello in Fijian. The Fijian without exception are a friendly people who smile and say Bula! whenever they see another.  I immediately took a liking to the word.  It is so much nicer than a curt “hi,” which sounds like a karate chop.  Bula!  It rolls off the tongue with warmth and feeling.  Booooo-laaaaa!

I had come from the Vuda Marina on one of the main islands of Fiji called Viti Levu.  When I got to the marina from the Nadi International Airport I immediately thought of the start of the Gilligan’s Island TV show.  The theme song played in my head as a small group of passengers gathered to board a dive boat for the ride to the resort.  There were two British honeymooners, four young female German backpackers, a family from New Zealand, two elderly Australian sisters, and me.  The movie star, the millionaires, and the professor evidently got lost on the way to the marina.  Instead of the Skipper and Gilligan, we had a very competent crew of three Fijian islanders who clearly had grown up on the water.

I was glad it was no three hour trip.  The seas were choppy and the ride was rough for half that time as we left Viti Levu for Waya Island in the Yasawa Island group, northwest of Viti Levu.  The Yasawas are on the drier and sunnier side of Fiji and consist of a dozen or more small islands.  The resorts on these islands are typically small and rustic, giving visitors the true Pacific island experience.  If you want the amenities of the Westin or the Sheraton, stay on Viti Lev

My destination was the Octopus Resort.  The Octopus is a small resort on Waya Island having about 20 garden bures, a few beachfront bures, a lodge, and a backpacker dorm.  A bure is a freestanding small building.  You could call it a hut, but it is much nicer than that.  My bure was on the beach at one end of the resort, next to a curving arc of three hundred yards of deserted beach.  The bure had a shower in the bathroom that had no roof!  I could look to the skies while showering under the rain-type shower head, just as if I was standing in the tropical rain.

There were at most 60 guests at the resort and all meals were served on large tables at designated times in the dining room.  I had never stayed at an all-inclusive resort before.  Here it was required because the island is so small and remote, there are no roads and no cars.  All supplies are brought in by boat.  There is nowhere else to go for a meal, no stores, no fast food restaurants, no signs, and no bombardment of the modern world to your senses.

There is soft light yellow sand everywhere, even for the floor of the dining room.  I am not wearing shoes for a week.

The only other inhabited place on the island is a tiny village of about 30 homes. The village is on the other side of the island, and most of the staff members live in the village and walk over a large hill to get to the resort.  The resort provides much needed jobs and an economic lift to the island.  Without it, fishing is the main livelihood.  The staff members are very friendly and helpful, you don’t see the resentment or indifference that is evident in many tourist destinations. They quickly learn the name of each guest and warmly greet them. At one time Fiji was a British commonwealth nation, so they speak English here.  The islanders speak English to the guests and Fijian among themselves.

There is no school in the village so the children go to a boarding school on Viti Levu.  All of the children in first grade through eighth grade live in the same dormitory.  On Sunday afternoon the children climbed into a fishing boat for the long ride to school.  Each child grabbed a backpack, enjoyed an ice cream treat, hugged their mother and father, and went away until Friday afternoon.

The village has a small Methodist church.  On Sunday morning I hiked over the hill with Tairata, one of the resort staff members, to attend the service.  The villager women were clothed in fine dresses and the men wore ties.  The children sat together in the first few pews and fidgeted like kids do.  It started with beautiful singing by the choir.  Then an old man stood up in the front corner of the room.  He was dressed in a dark suit and sported dark sunglasses.  I don’t know if he was blind but he sure looked a lot like Ray Charles.  He began a long monologue in Fijian. Tairata told me that this man was the chief of the village.  When Ray Charles was done and the minister stood up, I snuck out.  The service was entirely in Fijian and would last for three hours…

It’s a very different lifestyle here from the typical American existence.  It’s a perfect place to disconnect from the Internet, emails, smartphones, and the 24 hour news cycle.  Soak up the sun, swim, snorkel, and dive.  Time to relax.