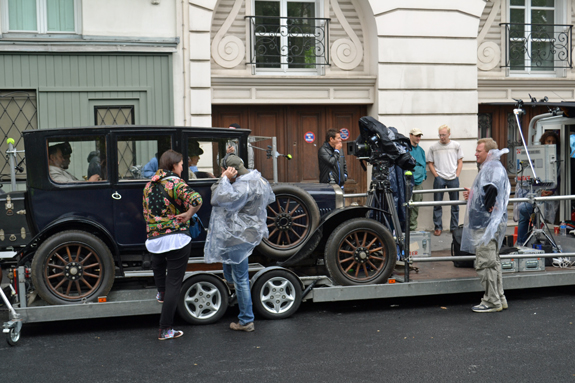 It was a cool rainy day in Paris as I walked across the Pont Neuf bridge over the Seine River. It was supposed to be summer, but this July morning seemed more like April. I was walking from my hotel near the Louvre Museum over to the Notre Dame cathedral to take some photos when I ran into a well-dressed couple loitering on the bridge. They looked at me with disinterest and then looked away. They were dressed in elegant long coats. The woman had a fancy hat on her head. Her dress flowed out from her coat down to her shoes. The man wore a bowler hat and spats. They certainly didn’t look like tourists, and they weren’t dressed properly for the inclement weather.

Maybe it was a photo shoot. I had seen one the day before down by the right bank of the Seine. A young woman had been sprawled over the hood of a 1970s car, with a view of the Eiffel Tower in the background. She was dressed in very short shorts and skimpy shirt. Her beau was at her side. The photographer moved back and forth snapping away while his assistant moved the lights.

But I couldn’t see any photographer this time.  I passed them by and continued over the bridge.  As I reached the other end I saw an old car and a horse drawn wagon waiting on the bridge.  The car was from the early 1900s.  It had wooden spoke wheels, a hard top, and a large steering wheel.  A man and a woman were in the car, with the man as the chauffeur behind the wheel.  They were dressed in costumes like the couple on the bridge.

I saw a tent on the other side of the road and there was a small crowd of people milling about, eating a mid-morning snack and drinking coffee. I finally realized that I had wandered into the middle of a movie shoot! I couldn’t see any movie cameras and saw no director. I decided to wait around and see how this movie-making magic is done.

Once the crew had gotten their fuel for the morning, they slowly organized the scene. Uniformed police at each end of the bridge redirected traffic to other roads. Crew at each end stopped pedestrians from crossing the bridge. There were actually two old cars along with the wagon. The vehicles were lined up at one end of the bridge. I still couldn’t see where the camera and the director were from my vantage point atop a stone wall past the end of the bridge.

Then a white van drove over the bridge, pulled a U-turn, and backed up to the front of the lead car with the two actors in it. The movie camera, the director, and the cameraman were in the back of the van. The back door of the van had been removed.

The director yelled “Action!” and the van pulled forward slowly. The cars and the horse-drawn wagon followed the van across the Pont Neuf bridge. Other extras in period costume walked along on each side of the bridge, including one man who folded a newspaper and crossed the street behind the passing cars.

At the other end of the bridge the procession stopped, and then turned around. I heard the word “Encore” from a bullhorn and the parade of vehicles came over the bridge back to me. After two takes, the director was satisfied and the crew and the actors went back to the refreshments tent. I decided to move along.

I turned the corner and promptly came across a second film unit filming another scene for the same movie. Another old car was on the back of a flatbed truck. There were four actors in the car. There was a movie camera on a tripod on the flatbed in front of the car. The cameraman was looking through the eyepiece while the second unit director watched the output of the camera on a big LCD display in the front of the flatbed. An assistant stuck her hands into the car with the scene marker card and the director yelled “Action!”

The two actors in the back seat started talking in French while the car gently rocked back and forth on the flatbed. It must have been attached to some hydraulic mechanism to give the illusion that the car was being driven on a bumpy road. An assistant was on each side of the car holding a large piece of black cardboard. At times during the scene, the assistants rotated the cardboard so that it gave the illusion in the car of going under bridges.

I have no idea what movie it is going to be. But if I ever happen to watch a French film set in the early 1900s where the characters drive over the Pont Neuf bridge, I’ll remember that I was there.