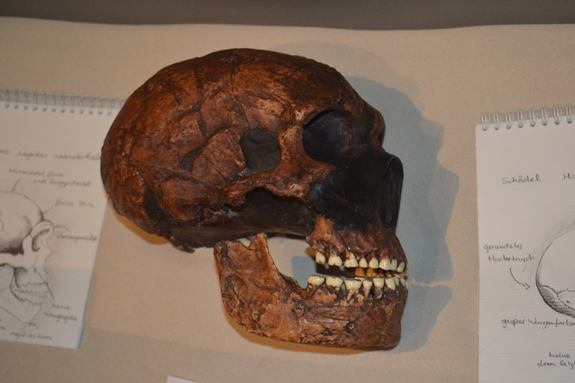 I have vague recollections of learning something about Neanderthal Man in eighth grade science.  But it was so long ago nothing sticks in my brain about it other than Neanderthal Man was some distant relative of Homo Sapiens.  What is a Neanderthal (Homo neanderthalensis) and where did it get its name?

I was staying with friends in Erkrath, Germany.  Erkrath is a suburb of Düsseldorf in the northwest part of Germany.  A few hundred meters up the road from where I stayed in Erkrath was the Neanderthal Museum.

The area around Erkrath was covered with forests and limestone rock.  In the mid-1800s, companies starting mining the limestone rock for raw materials for the Industrial Revolution.  In 1856, workers were digging in a cave and found some bones.  They thought they were animal bones and turned them over to a local scientist and teacher named Johann Carl Fuhlrott.

As soon as Fuhlrott examined the bones he knew they were not from an animal but from a human.  However, on closer inspection he saw that they were different than human bones, yet similar.  The bones were a partial skeleton of a new kind of man.  Since the area where the bones were found was called the Neander Valley (after a local called Joachim Neander), he called the specimen the Neanderthal Man.

There was a lot of controversy in the 1850s about whether the Neanderthal Man was authentic and what the specimen meant.  This controversy continued with the publication of Darwin’s “Origination of the Species” in 1859.  At the time, science had no accurate way of estimating the age of the bones.

In 2000, scientists started digging again in the Neander Valley to learn more about Neanderthal Man.  After more than 100 years of limestone mining, the area looked completely different than when Fuhlrott first examined the bones.  After extensive searching, scientists found two bone fragments in the area where the Neanderthal Man was believed to be found.  Amazingly, analysis showed that the two bone fragments were from the same skeleton that was found 150 years before.

I’m not sure if I am descended at least partly from Neanderthal Man.  Does it look like it?